She Rocks Awards honors women in the music & audio industries

With the current pandemic situation, and NAMM moving to a virtual convention, the She Rocks Awards are reimagining the ceremony to fit the current times and will follow suit with a virtual ceremony. The awards ceremony itself will continue to pay tribute to women in the music industry, with the ninth annual She Rocks Awards taking place at 9:30 pm ET (pre-show at 9:00pm) on Friday, January 22, 2021. This high-energy evening will include live virtual music performances, awards and speeches, celebrity appearances, a fabulous silent auction, and much more, all available online. This year’s virtual event is free and open to the public.

The 2021 She Rocks Awards recipients include:

Nancy Wilson is celebrated as one of the seminal musicians in the history of rock n roll. A guitar virtuoso from the age of 9, Nancy (and her sister Ann) lead the multi-platinum rock group Heart, with 35 million records sold. Nancy is revered as an ingenious guitar player and as a gifted lead vocalist.  That’s Nancy singing on Heart’s first Number One hit, “These Dreams.”  As a songwriter, Nancy has co-written a collection of indelible songs that have earned their way into the classic rock canon including Magic Man. Crazy on You, Barracuda, and Straight On. During an era when females in rock n’ roll were scarce, Nancy helped carve out a place for women to front a band and dominate a rock stage. Her icon status was cemented when Heart was inducted into the Rock n’ Roll Hall of Fame in 2012.

She Rocks Awards founder Laura B. Whitmore comments, “Nancy Wilson has been an inspiration to me personally and so many female musicians. I’m beyond thrilled to honor this legendary performer as we celebrate these inspiring women in music.” 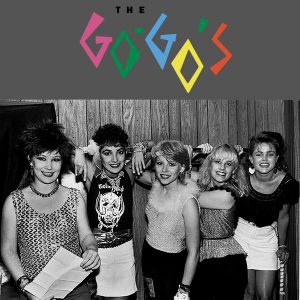 The Go-Go’s – After breaking onto the Los Angeles music scene in 1978, the multi-platinum, all-female American band The Go-Go’s still rocks over three decades later. Born out of the L.A. punk scene, Charlotte Caffey (lead guitar, keyboards and vocals), Belinda Carlisle (lead vocals), Gina Schock (drums), Kathy Valentine (bass and vocals) and Jane Wiedlin (guitar and vocals) didn’t play the part of bad girls – they were genuine punk rockers. The Go-Go’s made history as the first, and to date only, all-female band that both wrote their own songs and played their own instruments to ever top the Billboard charts.

Cherie Currie – founding member of the pioneering all-female rock band The Runaways. Cherie Currie’s extraordinary life reads like fiction. From her time as a teenage rock star to becoming an accomplished Chainsaw Carving artist, Cherie has always taken the road less traveled. Cherie was just 15 when she became the lead singer of The Runaways, and within a month the band secured a deal with Mercury Records. After leaving The Runaways, Cherie began a lengthy solo career that includes collaborations with Slash, Brie Darling, Billy Corgan, The Veronicas and more. 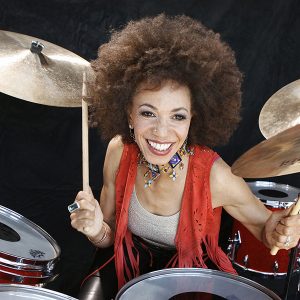 Cindy Blackman Santana – Over the course of her incredible three-decade career, virtuoso drummer Cindy Blackman Santana has proved that there isn’t a single genre of music she can’t master, nor is there a musician she can’t swing with. Even a cursory glance at her resume reveals such names as Lenny Kravitz, Joss Stone, Angela Bofill, and as they say, the list goes on. For the past decade, she’s been a mainstay on the drummer’s throne for the band Santana, led by her guitar icon husband, Carlos Santana. On her astonishing new solo album, Give the Drummer Some, Blackman Santana blurs genre labels and breaks down barriers as she blends pop, rock, funk, jazz, and much more throughout 17 tracks.

Amy Lee lead singer of two-time GRAMMY® Award-winning Evanescence, has made an impact on people around the world. The group’s 2003 landmark debut album Fallen laid the foundation; spending 43 weeks on the Billboard Top 10 and selling more than 17 million copies worldwide.

Margaret Cho – An accomplished performer in all formats, Margaret Cho could be called the “Queen of all Media” having conquered the worlds of film, television, books, music and theatre. Throughout her career, Cho has received five GRAMMY® Award nominations (including two for her most recent albums, Cho Dependent and American Myth).

Starr Parodi first entered the public eye playing keyboards as part of the house band on the hit late-night Arsenio Hall Show and has played, toured or recorded with a wide array of artists including Carole King, George Howard, BB King and Mavis Staples. Since then she has become a vibrant part of the Los Angeles composing community, scoring hundreds of episodes of TV & film as well as being a passionate and innovative solo artist, pianist and producer whose work has been featured on NPR, The BBC, KCRW and iHEART Radio.

Ann Mincieli is a renowned Engineer, Mixer, Collaborator and Album Project Manager for Alicia Keys. Since 2018, Mincieli has been involved with She is the Music, a nonprofit organization dedicated to increasing the number of women working in music across all levels. The 2x GRAMMY® winner has worked with some of music’s biggest acts including Mariah Carey and Jay-Z, among others. Mincieli is the owner of Jungle City Studios, which is one of New York’s most elegant and best equipped recording facilities in the world.

Sharon Hennessey – President of On-Stage, The Music People (a division of JAM) and the driving force behind the company’s two brands, On-Stage and TMP-Pro.

Register to watch the free livestream at:  www.sherocksawards.com