As Editor of the Montreal Gazette and Vice President – Editorial for Postmedia, Lucinda is the most senior female in Canada’s newspaper industry. But it was a surprise to learn that she’s also a songwriter whose work has been recorded.

Lucinda Chodan’s journey has taken her from the small town of Westlock, Alberta to Edmonton, Montreal, Victoria, Edmonton a second time, and then back to Montreal in 2013. She started as a typesetter and progressed to arts reporter and then to editorial positions of increasing responsibility. Lucinda has earned a National Newspaper Award and a National Newspaper Citation of Merit for her work as a reporter. During our first online meeting, I also learned that Lucinda Chodan is a warm and caring professional, dedicated to the role and importance of informed journalism in society. During our conversation, Lucinda was also careful to include the important mentors who provided guidance and encouragement in her career. 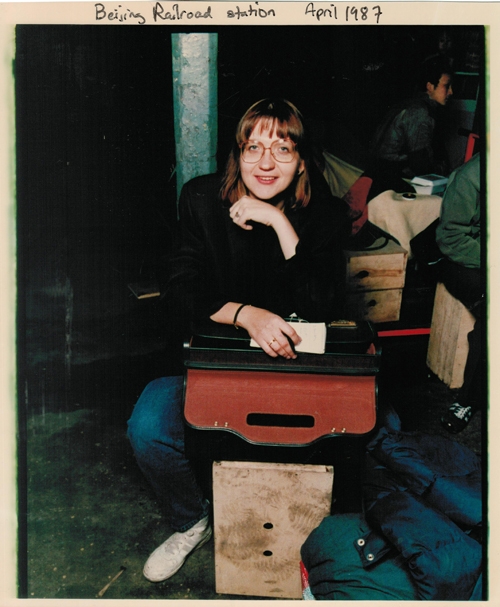 A young Lucinda on assignment in Beijing in April 1987: reported on the start of filming for the Canada-France-China co-production Bethune,
starring Donald Sutherland.
Photo: Kevin Tierney

“I grew up Westlock, Alberta, a small town eighty kilometres northwest of Edmonton. My dad was a teacher and my mom was a homemaker. My uncle was a farmer, and a bachelor – so in the summers we worked on his farm. It kept us busy, and I learned to ask; ‘Is there anything else I can do?’ I guess that work ethic has stayed with me.”

“I ‘discovered’ journalism when I was studying for my education degree. I volunteered to do typesetting on the student newspaper and I caught the excitement of journalism.”

Lucinda got a job with the Edmonton Sun, again in the typesetting department, but better things would come. “I was plucked from typesetting to become a proof reader. The Entertainment Editor wasn’t happy with the music writer, but before he let him go, he asked if I’d be interested in being the music writer.” It was an easy decision for Lucinda, and she was covering concerts and music in a Canadian city that was part of the live music circuit – especially country music.

“I was fortunate to have Dave Billington as a mentor in the 60s and early 70s. He was a curious mixture of thunder and erudition. He helped me out a lot.”  Billington is credited as being the first print journalist to give serious attention to the arts and in particular, film and television in Alberta.

Lucinda explains how she first moved to Montreal from Edmonton in the mid-80s. “Gary Steckles was a friend, and he was working at The Gazette, and really enjoying the paper and the city. There was an opening for a music writer and he encouraged me to apply. I applied, got the job and that turned into a twenty year run with The Gazette.” 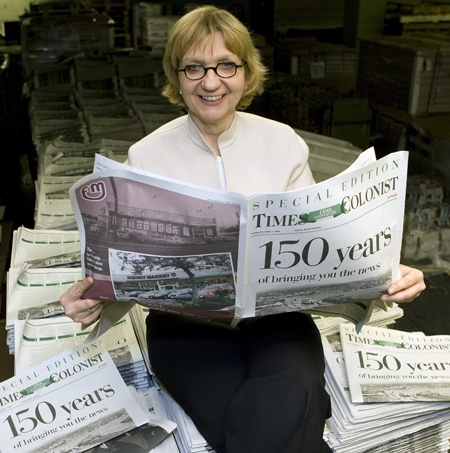 Lucinda started writing about music and the arts, and earned several promotions, eventually becoming the paper’s Deputy Editor. “I was fortunate to learn from talented journalists like Michael Cooke, who went on to be the editor of the Chicago Sun Times and the Toronto Star. Peter Stockland, Joan Fraser and Allan Alnutt were all very supportive.”

One of Lucinda’s responsibilities was Editor of Readership Development, a responsibility and experience that would prove to be useful in the future when she would preside over the re-design of The Gazette and its launch into digital media.

“During that first twenty years with The Gazette, my work was mentally stimulating. The Gazette has always been a leader in trying to foster a collaborative and respectful work environment amongst colleagues and superiors. As a woman, I was never made to feel that I didn’t belong by my male colleagues.”

At the reverse side of the male/female work equation, Lucinda recounts one incident when a male colleague said that he might have a problem reporting to a female supervisor. With a wry smile she added; “I told him that he’d better get used to it.” 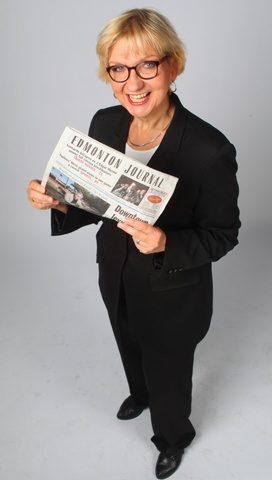 In 2005, Lucinda accepted the challenge to become the Editor of the Victoria Times Colonist. Alan Alnutt, who had been Publisher at The Gazette, had taken that same job at the Times Colonist. He wanted Lucinda to bring her journalistic and management talents to the Victoria daily, still in the Postmedia family. This was followed by two-plus years at the Edmonton Journal, another Postmedia daily. Lucinda had established her credentials as an effective Editor, with an ability to motivate journalists using her collaborative management style.

The biggest challenge in her career was waiting back in Montreal.

In 2013, Postmedia asked Lucinda to go back to Montreal and oversee the important elements of The Gazette’s evolution. The first included a re-design and re-branding of the daily paper that has been in operation since 1778.  The name was changed to the Montreal Gazette, and a new logo was adopted. The paper itself was re-designed, with a view to having a look that would be consistent with the paper’s web page. The second major undertaking was to accelerate the online presence of the paper, now a news organization.

During our conversation, Lucinda and her colleagues were working on an important breaking news story, and at one time she had to take a short break to consult with her colleagues on the story. This introduced an advantage of digital media. “We can break a story as soon as we have it ready to go; we’re not limited to our late evening press time, although we’ll certainly have the story in tomorrow’s paper. Now, we don’t have to wait. We couldn’t do this without our digital presence.”

“In the West, we have an expression; ‘Get ‘er done!’; and that describes working at a small paper, where you have to learn to do everything. Lucinda adds with a chuckle; “I discovered that the same applies to big newspapers in big markets.”

“I still marvel at the fact that I’m in this position.”
… Lucinda Chodan

This is a challenging time for newspapers; but Lucinda firmly believes that there remains an important role for print news organizations. “Like all news organizations, we are competing with Google and Facebook for ad revenues and even subscription revenues. At the same time, we understand that the credibility of newspapers is still appreciated by the general public.”

Lucinda cites two recent examples; “At the beginning of this pandemic, the Quebec government was telling us that the situation wasn’t as bad here as elsewhere. Aaron Derfel did his research and discovered that those statements simply weren’t true.” As we came to understand, the case levels and deaths in Quebec were much higher than other Canadian jurisdictions. Continuing, “It was Aaron who broke to story about the tragic situation at the Herron Residence, which subsequently opened scrutiny of retirement residences across the province.”

“On another front, we identified a neo-Nazi recruiter in Montreal who had participated in the alt-right demonstration in Charlottesville, and how Montreal was a fertile recruiting ground for the far right movement.”

“Lucinda Chodan has proven to be an excellent editor
in these troubling times …
who has had to make some brutal decisions to keep our ship afloat.”
… Terry Mosher, aka Aislin 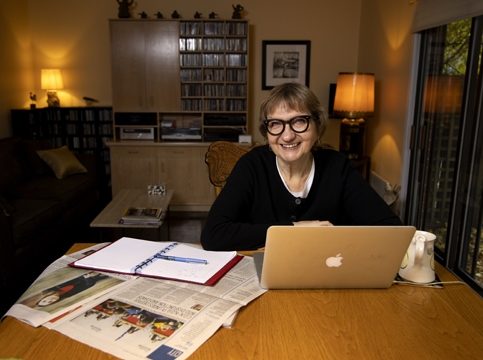 As Editor of the Montreal Gazette, Lucinda Chodan oversaw the transformation of the paper and
the successful introduction of its digital platforms
Photo: Allen McInnis

“We have a responsibility to reflect our community back to ourselves. It’s important that our readers see themselves in the Montreal Gazette. Recognizing that daily newspapers have to compete with Google and Apple who also use content without compensating the daily newspapers who produce the articles, Lucinda states; “I’d like to see a lot of noise about how we are going to continue to be of service to our communities, with so much revenue being taken by these corporate giants.”

Terry Mosher, better known to Montrealers as Aislin has reported to thirteen different editors in his storied career as Canada’s leading political cartoonist. He has great admiration for his current boss; “Guiding The Montreal Gazette is one of the more difficult jobs in Montreal. Check out the armchair critics lurking out there in the West Island weeds and elsewhere. This situation is magnified recently, what with the dwindling resources available to produce a decent daily newspaper. Lucinda Chodan has proven to be an excellent editor in these troubling times. She is s smart as a whip – never mind being a sensitive individual – who has had to make some brutal decisions to keep our ship afloat. On a personal level, while working as a cartoonist in one of the most interesting cities in North America, Lucinda has been the prefect editor by definition. She simply leaves me alone to do what it is I do – even if I am sometimes a puzzle to her.”

As our conversation draws to a close, Lucinda adds; “I believe that we continually need to examine our own values of fairness and maintaining a collaborative work environment. I remember all the people that helped me along my way in journalism, and I see sometimes see my younger self in young and enthusiastic journalists here at The Montreal Gazette, and I want to give them the same encouragement that I was fortunate to receive.”

When I asked Lucinda to talk about her song writing and love of country music, she lit up like a Christmas tree and her smile could illuminate a concert hall. She’s a big fan of country music, and uses a quote from the late Harland Howard to describe that music as; “Three chords and the truth.” She is knowledgeable about the genre and has been a contributing editor to Country Music Magazine.

Lucinda liked to go to Bob Fuller’s Monday night Old Time Country Music events at The Blue Angel when the club was located on Drummond, before relocating to The Wheel Club in NDG. “I met my husband Dave Clarke at The Blue Angel. We started off as friends and our relationship turned to something else, and we married.”

With considerable pride, Lucinda told me; “Dave is a full time musician and is considered to be Canada’s most tasteful acoustic guitar player.” Dave is a part if a group called Steel Rail and they have recorded four albums, including the most recent, Coming Home. Lucinda has written the lyrics to several of the group’s ‘folkgrass’-inspired songs, including the title song on their first album, A Thousand Miles Of Snow. She has written the lyrics to four songs on the group’s most recent album, Coming Home.

“When Peter Gzowski died, I got a call from his son, who asked permission to play A Thousand Miles Of Snow at his father’s funeral; saying that it was one of Peter’s favourite songs.” A fitting tribute to a man who brought Canada to Canadians for so many years on CBC Radio’s Morningside.

“Writing song lyrics is a bit like writing poetry, but cutting right down to the basic words to capture the essence of what you want to say.”