YidLife Crisis – A Call to Montréal

“Returning” for their first Montreal-centric show since the sold-out launch of their award-winning documentary  CHEWDAISM: A Taste of Jewish Montréal, the 4-time Canadian Screen Award nominated YidLife Crisis  (Jamie Elman and Eli Batalion) have created a brand new one-time virtual show experience celebrating – and lightly roasting – their beloved hometown. A Call to Montréal is a reach out to the community separated by the COVID-19 pandemic and a reminder to all about its vitality in the face of adversity, all done in classic YidLife comedic love-letter fashion.

Partnering with the Segal Centre as part of their ongoing efforts to connect with audiences digitally, and with the support of a team of Montreal Jewish community organizations including the Cummings Centre, the Sylvan Adams YM-YWHA, and the Jewish Public Library, the one-time-only show will stream at 7:30 pm on Thursday, October 22. It will comprise a mix of YidLife Crisis skits and shtiks shot socially-distanced in Montreal and remotely, with various musical performances paying tribute to the city. The show will be followed by a Q&A in which the audience will have the chance to interact with Jamie and Eli. A portion of the proceeds from the special event will help support the presenting partners from the Montréal Jewish community.

“After ‘exporting’ Jewish Montréal to the US and beyond, it gives us great pleasure to ‘return’ to our resilient community and remind them of what they already know: that while we may be down, we’re still alive and – gently – kicking,” say the YidLife Crisis boychiks. 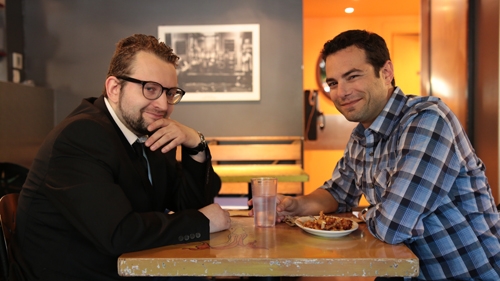 Eli Batalion is a writer, producer, director, actor, and composer for film, TV, the web, and the stage. He began his career in musical theatre with the hit the award-winning internationally touring play JOB: The Hip-Hop Musical. He and partner Jerome Sable evolved their theatre work to the screen with the musical horror comedy short The Legend of Beaver Dam, selected to TIFF, Sundance, Berlinale, and over 75 global film festivals, and to the feature horror musical comedy Stage Fright featuring Minnie Driver and Meat Loaf, and produced by Serendipity Point Films. His writing/directing start-up feature film comedy, APPINESS, was released through distributor Gravitas Ventures in 2020.

Jamie Elman is an actor, writer, director, producer, and musician. He has appeared on some of television’s most acclaimed series including Mad Men, Curb Your Enthusiasm, and House M.D. and for three seasons of NBC’s critically lauded drama American Dreams. His breakout role was Cody on the FOX/YTV teen sitcom Student Bodies. Segal Centre audiences will remember Jamie as the combative Liam in all 3 runs of Bad Jews in Montreal and Toronto. Career film highlights include California Dreamin’ (Grand Prix, Un Certain Regard, Cannes Film Festival), When Nietzsche Wept (portraying a young Sigmund Freud), and the series finale of beloved Canadian drama Bomb Girls. Voice work includes animated Disney blockbusters Wreck-It Ralph and Frozen. He co-created and starred in the web series crazy/sexy/awkward for Fremantle Media, which was acquired by Howie Mandel. He is also a pianist and singer who has recorded with Ben Harper, Natalie Maines, and Rickie Lee Jones.

To purchase your ticket visit: www.segalcentre.org
Streaming details will be sent to ticket buyers the day before or the day of the event.

YidLife Crisis is a hit Yiddish web series turned cultural brand using the “Trojan Horse of Comedy” to explore a mix of secular culture, Judaism, Yiddish and multi-culturalism, with the express goal of building bridges both within the polarities of the Jewish community and beyond to global cultures. Since its inception in 2014, YidLife Crisis has grown into a small and vibrant organization reaching literally millions through a combination of “edge-Jew-taining” video
content (e.g. eponymous web series, Global Shtetl series exploring Jewish neighborhoods around the world, YidLife Crisis, Guide to series, YidBits), and live engagements in dozens of cities across the globe. www.yidlifecrisis.com