Alain Creton is one of those larger-than-life people that can dominate their profession or  neighbourhood. In his case, Alain is by far the dominant personality on Montreal’s downtown Peel Street, where he has been unofficially named ‘The Mayor of Peel Street’. He’s been the owner of Chez Alexandre et Fils since 1977, a restaurant and bar that over the years has become an institution. “I tell my staff that we don’t have ‘clients’ or ‘customers’ – we have ‘friends’ who we are welcoming to our establishment.” During the Grand Prix events – Chez Alexandre is Formula I central. Champagne flows like water and it’s a wonderful madhouse during race week. It’s a world away from his hometown of Compiègne in northern France.

“I arrived here from France in 1967, literally off the boat. I had finished my service in the French Army, and I wanted to make my life in Montreal.” Alain had been trained as a cook and already had hospitality experience from working in restaurants and bars in Paris and St-Tropez.

“People say that Alexandre is an institution – that I’m an institution. I’m humbled and I consider it an honour to be recognized like that.”

“I got myself a little room and had to find a job. I started as a busboy, then got a job as a waiter, and then Assistant Manager and then Manager at The Playboy Club. At the same time, on Fridays and Saturdays I made and delivered sandwiches to a hair salon on Décarie that was affiliated with Charles of Westmount. I was making an extra $600 a week, and I did it for eight years! The customers loved it, saying; ‘Here comes the sandwich boy!’ That was a lot of money back in the early 70s – especially since I already had a job.”

In 1977, the company that owned Dupont & Smith, The Jockey Club and several other Montreal-area restaurants decided to sell Dupont & Smith on Peel Street, which occupied the space now known as Chez Alexandre & Fils. “The concept with the French and English surnames was that they had a British pub upstairs and a French bistro on the main floor. The building owner only wanted to give a five year lease – but I bought the business anyhow and changed the name to Chez Alexandre et Fils. After three years, we knew each other well and I was able to renegotiate a longer lease. The same family still owns the building.”

Alain maintained the English-style pub upstairs and the French bistro on the main level – although he rebuilt the bistro five years after acquiring the business. 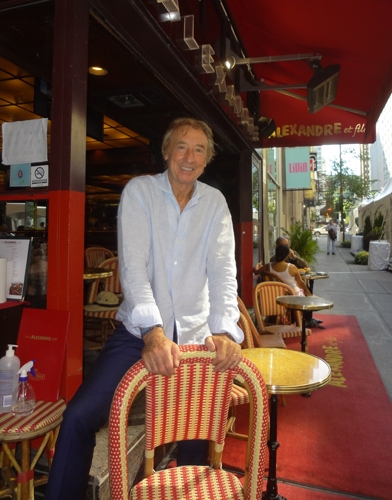 Alain Creton is the amiable Owner and Host of Chez Alexandre et Fils, a downtown institution

While the upstairs pub was very popular, Alain wasn’t able to sell beer on tap – a true hallmark of a British pub. “I wanted to sell draft beer, but couldn’t get a permit. At the time, taverns, brasseries, bars and restaurants each had a different kind of permit. I was lobbying different people in the government, trying to make progress. Some of the government public relations people even came here eat and enjoy themselves. I spoke with Michel St. Louis, who was the President of the Quebec Newspaper Association, and also Jerry Trudel, who had been a sports writer with Journal de Montreal before being elected with the PQ. I learned from a customer from Ireland that the beer was technically pasteurized, even though it said ‘Draft’ on the kegs. I told this to Jerry; and one day Jerry had the chance to speak with René Lévesque who said, ‘I don’t care what kind of beer they sell at Chez Alexandre.’ Jerry went to the Deputy Minister with this ‘news’ from the Premiere, and we soon had our licence.”

And so, in 1982, Chez Alexandre et Fils became the first establishment in Quebec to sell British beer on tap. It was to become big news, with coverage in English and French daily newspapers. On the Anglo side, Nick auf der Maur and Ted Blackman both covered the story. Already popular with locals and tourists, Chez Alexandre became an even more popular destination for visitors to Montreal, not to mention thirsty British expats living here.

Alain continued to go from success to success. “During the discotheque craze, we opened the Lambada club downstairs that was open seven nights a week. From Thursday to Sunday nights we’d have lineups all the way up the block. We’d have 1,000 people a night! We helped CBS Records to sell 50,000 copies of Lambada, and they presented me with a framed Gold Record.” Alain claims that he while can’t sing a note, and he justifiably takes great pleasure in displaying the Gold Record.

“I tell my staff that we don’t have ‘clients’ or ‘customers’ – we have ‘friends’ who we are welcoming to our establishment.”

“I know this is a business, but in a way it’s also my home. I feel like I’m receiving friends at my home.” Alain has received the prestigious L’Ordre de Mérit Agricole from the French Government for promoting French cuisine.

Because of Alain’s business acumen and downtown presence, he was named the first President of the Société de développement economic de centre-ville during the Doré administration. “We re-instituted the Santa Claus Parade and organized $5 parking during Christmas and New Years. We only had a budget of $200,000 – but we were successful in promoting downtown as the biggest shopping centre in Montreal. Today, the city invests $3 million to promote downtown, and we merchants pay $300,000 in a separate budget to hire street cleaners. They get a job with decent pay and we have clean streets.”

“People say that Alexandre is an institution – that I’m an institution. I’m humbled and I consider it an honour to be recognized like that.”