Ho! Ho! Ho! A swarm of happy Santa Claus arrives once again at the Stewart Museum. From November 14, 2014 to January 4, 2015, families are invited to meet these pleasant figurines and take part in exciting activities. That’s not all: access to the Museum is free throughout the entire duration of the exhibition.

Most Santas were handmade by American artists such as Beth Cameron, Lynn West and Lynn Haney and have earned their creators several prestigious awards. They illustrate a fascinating aspect of doll making and reveal an evolution in the artistic representation of one of the most famous and beloved folk characters.

“Following the success of last year, the exhibition come back to delight children of all ages. The Santas presented are unique both for the material used and for their personality”, says Suzanne Sauvage, President and CEO of Stewart Museum. “Talking on the phone, riding a polar bear, practicing cross-country skiing or proudly wearing the arrow sash, they reveal more than one face.” 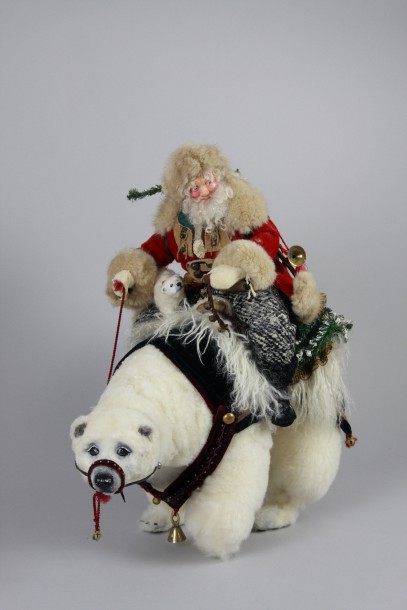 The annual Stewart Museum Santa exhibition is free of charge

To immerse visitors in the holiday atmosphere, activities related to the white-bearded little men will be offered as a craft workshop, a themed treasure hunt and a short films screening. It will be also possible to fill up with hot chocolate and cookies ($).The Stewart Museum is open from Wednesday to Sunday, 11 am to 5 pm, and exceptionally on December, 22, 23, 29 and 30. Closed December 25 and January 1.

About the Stewart Museum

The Stewart Museum, a private, non-profit history museum, was founded in 1955 by philanthropist David M. Stewart. The institution holds a unique collection of nearly 27,000 artifacts, archival documents and rare books that show the European presence in New France and North America up to the present. The Museum’s main mission: to conserve and exhibit these objects, which relate to the voyages, scientific advances, feats of arms, beliefs and daily life of our ancestors. This Montréal organization, is located in the parc Jean-Drapeau, in the arsenal of the British fortified depot on Île Sainte-Hélène, a 19th century military construction registered in the Répertoire du patrimoine culturel du Québec.