Smaller towns have become popular for online workers and retirees who enjoy the relaxed lifestyle. This is in addition to local inhabitants who already know the small-town benefits, having lived there for generations. This migration has created a new opportunity and market for local theatres and arts centres; which become the focal point for community activity and exhibitions in addition to the staging of live theatre and musical performances. This has been the case with the Village Theatre in Hudson, Theatre Lac Brome in Knowlton and The Piggery Theatre in North Hatley.

The shows and exhibitions are popular with long-time and new residents alike. The performances also draw audiences from surrounding communities. A local arts and performance centre can be good for a town’s business, while adding to its cultural life. Audiences generate positive economic spinoffs for local restaurants, coffee shops and merchants. An active ‘arts community’ can enhance the value of a town for retirees researching a location to enjoy their retirement years. 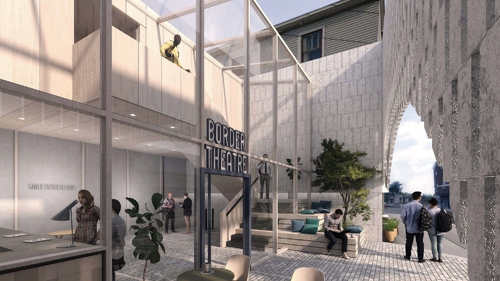 The entrance and foyer to the Border Theatre is bright,
airy and welcoming
(Designers: Ian Carney and Dion Dekker, Architects)

Stanstead has a rich history as a commercial centre in the Eastern Townships, and the town contains many buildings of historical and architectural value that have been re-purposed for new uses in the 21st century, such as the Colby Museum, the Manoir Stanstead seniors’ home, or the lovely transformed granite Stanstead heritage bank building that now houses a popular cafe-bar spa for special events. A former blacksmith’s barn has been transformed into an art gallery, exhibition and meeting space that is open from June to September. Named Le Vieux Forgeron (Ye Olde Blacksmith), the gallery has hosted thirty-eight exhibitions since opening in 2008, with as many as 200 visitors attending the popular show openings.

Stanstead and Derby Line (once essentially one town straddling the border) were the subject of an article in Canadian Geographic Magazine. The article featured the famous Haskell Free Library and Opera House that stands on the Canada – United States border. The stage is in the US and the seats are in Canada. The Haskell family also constructed the Border Theatre on the town’s main street. Originally named His Majesty’s Theatre when it first opened in 1912, the theatre was renamed the Border Theatre when it was rebuilt after a devastating fire in 1948.

Local Ogden resident Gabriel Safdie and his wife Eva Juul have been in the vanguard of Stanstead’s renaissance, and they are enthusiastic about the renovations and re-development of the Border Theatre as a, multi-purpose performance, cinematic, exhibition and event space. The couple believes that the restored former Border Theatre will be a key component in the town’s ongoing revival.

Gabriel has worked as an educator at Dawson College and as a talented business entrepreneur after taking the reins of his late father’s business. A bit of a renaissance man, he’s also an accomplished photographer and author. His combination of artistic sensitivity and business discipline has been instrumental to the success of several other projects in the Stanstead area, such as the Stone Circle that Gabriel and Eva had erected and dedicated to the town that in 1990 merged Beebe and Rock Island with Stanstead. It is also known as the Granite Capital of Canada. Reminiscent of Stonehenge, it is arranged in a circle of some 60-ton slabs of granite. It is included in the new theatre’s programming, as being inside the town’s park; it also serves the town for its major outdoor events, including celebrations of the solstice and for First Nations. If not for the global pandemic, this summer we would have enjoyed a production by the renowned Shakespeare-in-the-Park company at the Stone Circle. 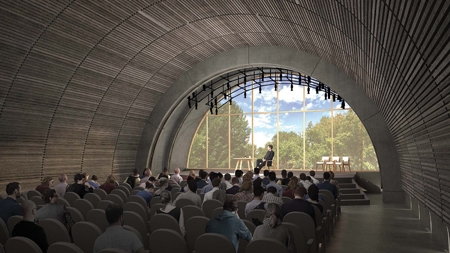 Before embarking on the Border Theatre project, Gabriel commissioned a business plan by Basta Communications and Sandra Gagné of nearby Sherbrooke. Together they determined that a revived Border Theatre could be self-sustaining. More recently, Gabriel engaged Éric Gauthier of f.a.b.g who has completed a feasibility study for the renovation of the Border Theatre. The firm has designed a number of high profile theatres in Montreal and beyond.

Actor Donald Sutherland lives in the area, and is pleased to have the theatre named in his honour as the Donald Sutherland Theatre, that will soon stand under the umbrella of Centre des Arts de Stanstead with the art gallery and the café-bar Sans Frontière. The new theatre is designed with a small mezzanine to accommodate 300 seats. It will therefore provide a much needed venue for the performing arts and assemblies for Stanstead College. Talks with the school have since confirmed the institution’s need and enthusiasm in using the new theatre. Additionally, Stanstead is already on a popular tourism route, with approximately 1.5 million people annually crossing the Canada/US border.

The entrance foyer will be bright and airy, and the planners have adapted some design elements that have been used successfully in similar buildings. The objective is for the design to provide a sense of occasion for a ‘good night out’ and at the same time have an open and welcoming entry. The semi-circular shape of The Donald Sutherland Theatre has proven to provide excellent acoustics for musical performances.

Luce Couture, who recently retired from a thirty-year career of managing the Centennial Theatre at Bishop’s University, is now Project Manager and programming Director of the Centre des Arts de Stanstead. Ms. Couture also served as Interim Director for the Musée des beaux arts de Sherbrooke; adding to her experience in arts management and fundraising. She is also managing grant applications from governmental bodies.

Since 2018, Ms Couture has programmed under Centre des Arts de Stanstead a series of films, shows, and workshops for children, the young adult community, senior citizens and the general public in a variety of Stanstead venues. Once opened, these activities will be centralized in the new theatre, providing immediate programming for the Centre.

A poet and visual artist, Christian Williams is another key person in the project; bringing to the team his twenty seven years of experience teaching visual arts at Stanstead College. Recently retired, he is working with Gabriel Safdie on foundation fundraising and coordinating, acting on behalf of the Donald Sutherland Theatre as a liaison with the college. Christian Williams agrees the project is a key turning point for Stanstead – a nucleus for the region, while giving the finishing touch to the town’s revival and transformation.

To date, the activities of the Centre des Arts de Stanstead have attracted grants such as contributions from Heritage Canada, le Ministre de Tourism, The Power Corporation Foundation and the Zeller Family Foundation, with others pending, such as from Conseil des Arts et des Lettres du Québec (CALQ) and other interested foundations. These bodies and institutions have recognized the value of contributing to Stanstead’s cultural evolution, and have seen the multiplier effect of their financial backing. As soon as the second year of the Centre’s programming is completed in 2020, the project will be eligible to receive major grants and contributions from the key foundations for the full resurrection of the structure and the rebuilding of the cinema as a multi-purpose theatre.