“I love my family, I love sports and I love business!” This statement at the beginning of our conversation is an accurate self-description of Mitch Garber. He has a tremendous amount of energy that fuels his formidable intellect. It’s a combination of characteristics that has enabled him to achieve great financial success, balanced by humility and a generous spirit that keeps him grounded.

Since our first conversation in 2015, when Mitch had taken on the Chairman’s position at Cirque de Soleil, he has added numerous responsibilities to his résumé as an entrepreneur and philanthropist. His wife Anne-Marie Boucher is a successful attorney, specializing in corporate tax law; and the power couple have become active philanthropists in Montreal and Israel. “Anne-Marie and I are a team – and she brings a lot to the organizations we support. In addition to being a fine attorney, she has a Master’s degree in Board Governance, which can be very useful in providing focus and guidance.”

Mitch has taken on added responsibilities as Chairman of Invest In Canada and partner in the new NHL hockey team in Seattle. He is also supporting Stephen Bronfman in his bid to bring Major League Baseball back to Montreal.

Relationships are important to Mitch; “Most people are successful because of ‘breaks’, being in the right place at the right time. I know that when I meet someone – there is almost always a benefit to that encounter. It might not be today or tomorrow, but somewhere down the line, something good can happen.”

“The main luxury of my success is that I can choose to only do things with people I like, that I’m comfortable with.”

During our first conversation in 2015, I asked Mitch about the source of his motivation. “I grew up in a duplex at the edge of Snowdon and Hampstead, surrounded by people with money. Frankly – I was jealous. I know you’re not supposed to be – but as a kid; you want what you don’t have. I wanted a back yard, a basement – like the other kids that I knew. The drive that I had in my early business career was fuelled by those boyhood emotions.” 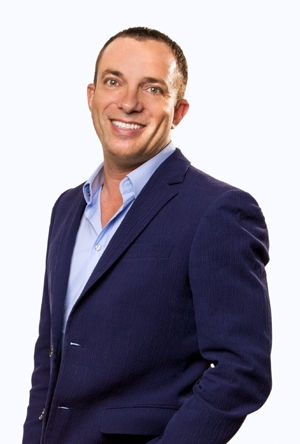 Mitch Garber is passionate about his family, sports and business

Mitch Garber now enjoys a luxurious lifestyle with his wife and two sons, enjoying the financial rewards of his many business successes. Ranked in 2017 by Bloomberg as the 7th highest paid executive in North America, he’s come a very long way from being the kid who longed for a backyard.

Mitch also separately credits his late father and his mother for part of his success. “My father was a brilliant, self-educated entrepreneur. He was one of the first restaurateurs to offer home delivery with his Pizza Pan pizzas. He encouraged me to get an education, and more specifically to become a lawyer. We were very close, and he was a great father in ways that are not common. He wanted me to have the formal education that would give me the tools he lacked.”

“Cookie Lazarus took me into his law practice, and I learned a lot about the gaming business. When the internet started to open up all kinds of business opportunities in the late 90s, I was in a position of having a solid knowledge of the gaming industry and an understanding of the internet. I was exactly in the age of the internet boom of electronic commerce. I was involved with in the start-up of Total Net; a business to process credit card transactions.”

“I was gaining momentum, and I credit my Mom, Cookie and my Total Net partners as my mentors – and helping me to get my momentum going.”

“Because of my knowledge of electronic commerce and the gaming industry, I had an opportunity to move to the UK and work in the online gaming industry – which was still very new.”

It was in during the family’s time in England that Mitch became involved in large-scale philanthropic activities. “I love giving money away. As Canadians, we have already been born lucky to live in a safe and wealthy country. I do live a life of luxury, and I believe that we should help others who are less fortunate. I was always disgusted by wealthy people who were not philanthropic.”

Mitch has been credited by the Financial Post and other business publications for saving Caesars’ from bankruptcy, and I asked him to expand on that. “Caesars had a lot of debt, and what I did was to create a new business (Caesars Interactive Entertainment), which I also invested in personally. We started at $0 and built it up to $5 billion; and then sold most of it to Alibaba Founder and CEO, Jack Ma. Caesars was then able to retire their debt.”  This in turn made Caesars much more attractive to potential purchasers, and in 2019 the company was sold to Eldorado Resorts for $17.3 billion.

Mitch Garber and Anne-Marie Boucher Philanthropy at a glance

Mitch was aware that Cirque de Soleil founder Guy Laliberté, was interested in selling, and stated; “I was familiar with the company from their operation in Las Vegas. I had also aligned myself with the eventual purchaser, and invested in the company myself.” Continuing, he states; “Cirque de Soleil is a complicated business. Firstly, there are so many shows, including seven permanent shows in Las Vegas. We also have shows in the Disney parks. We are subject to the weather, and man-made disasters, such as the terrorist attack in the Paris nightclub. We unfortunately have to realize that these tragic events are not one-off events – they continue to happen. Disease outbreaks like the one we’re seeing in China can shut down a production or diminish travel.”

“Another complexity is the understanding current and future generations – in terms of what they will find entertaining. We are competing for their time… and on that aspect, so are all other businesses.”

“Cirque de Soleil headquarters will remain in Montreal. There aren’t many cities in the world that could have attracted the talented performers and appreciated their shows as Montreal audiences have done since the beginning.”

“My investment is the Seattle NHL team is a dream come true. I’m enjoying the process of building the team and the business; including our training facility in Palm Springs.” Beaming like a kid in a candy store, Mitch states; “I like everything about it! The team combines my love of sports and business in one organization.”

Mitch has accepted to serve as Chairman of Invest In Canada, a new Federal agency to encourage businesses to select Canada for their location and investment. “We work co-operatively with the provinces, and it’s going very well. Locally, Montreal International and Investissement Quebec are the gold standard for municipal and provincial agencies.”

“Montreal is an amazing place. We’re better off with our multi-cultural diversity.” Continuing he adds; “I have a very good relationship with Premier Legault. I think he’s doing great things for Quebec’s economy, and his ministers of Finance and Business Development are very competent. That said, I disagree with him on Bill 21, and have stated that publicly and in private conversations with him. We can agree to disagree on Bill 21, and still work together on other opportunities for Montreal and Quebec.”

“There are three phone calls that left me flabbergasted. I recently received a call from the Governor General’s Office to inform me that I had been named to The Order of Canada. I’ll receive that award on March 24th. The second came from the University of Ottawa to say that I would be awarded an Honorary Doctor of Law. The third came from HEC Montreal to also inform me that I would receive an Honorary Doctor of Law. Each award is an honour – but with that honour comes the responsibility to live up to it.”

Mitch Garber and his wife Anne-Marie Boucher continue to make enormous contributions Montreal as entrepreneurs who generate revenues and create employment, and as philanthropists who are generous with their time and money. “We plan to continue giving away money, carefully choosing our causes.”

Our city is a better place with the business and philanthropic contributions of Mitch Garber and Anne-Marie Boucher.