Porte Parole is celebrating its 20th Anniversary in 2019-2020 in a big way. The company is presenting five plays in Montreal, two productions at Ottawa’s National Arts Centre, a play touring in five U.S. cities, one tour in France and another in Germany. This international success and recognition is indicative of the high quality and content of the company’s productions. It’s an exciting time for the company and the co-founders; playwright Annabel Soutar and her actor husband, Alex Ivanovici. This February, in what may be their most ambitious documentary drama to date, the company will be presenting its groundbreaking production, The Assembly at The Segal Centre for the Performing Arts. 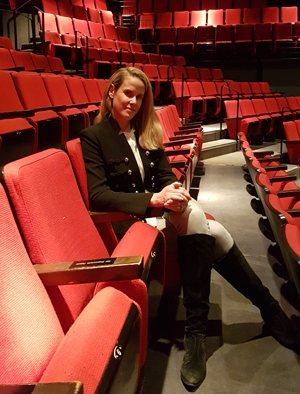 Playwright Annabel Soutar in the Sylvan Adams Theatre at the Segal Centre for the Performing Arts – where the The Assembly will be performed in February before moving on to the National Arts Centre in Ottawa
Photo: Rana Alrabi

The company has gained a solid reputation for the quality of its original plays; thereby being able to attract nationally famous actors such as Eric Peterson (Billy Bishop and Corner Gas) to take on lead roles such as he did in Seeds and again in The Watershed. Annabel’s plays have also been programmed in major Canadian theatres, such as Centaur in Montreal, The National Arts Centre in Ottawa, Usine C and La Licorne in Montreal and Theatre La Bordée in Quebec City.

“I took A Levels (to qualify for university) in England, and was accepted to Princeton in New Jersey, where I studied from 1990 to 1994. I was initially enrolled in Math, History and Economics, but an off-campus moment caused me to change my studies to a Liberal Arts degree, and focus on the Art of Documentary Theatre. I saw Anna Deveare-Smith, an African-American actress and playwright in, Twilight: Los Angeles 1992; a production that she wrote and starred in. It was about the riots in L.A. following the acquittal of the policemen who beat Rodney King. Anna based her play on interviews that she recorded, and she used photos and news footage as a backdrop. She played all the characters, and I could see the potential of theatre to enable an audience to overcome their individual differences.”

“I came back to Quebec shortly after the 1995 referendum, and I was an Anglo living in a French milieu. We produced our first play Novembre, in 1998. The play was in French, and we followed Jean Charest, Lucien Bouchard and Mario Dumont in a docu-drama format. The play was well-received with audiences – but we managed to alienate the intelligentsia of both sides of Quebec’s language divide. However, it put us on the map; and documentary theatre was introduced to Montreal. Novembre was a snapshot of our reality.” Subsequent plays 2000 Questions, Santé! and Montreal la blanche continued to build the company’s credibility with audiences and critics. There was something different happening in the Porte Parole productions that attracted audiences. In 2008, the internationally acclaimed Festival TransAmériques commissioned a documentary drama, and Annabel she wrote Import/Export about how outsourcing to China precipitated the closing of a factory in Thetford Mines. Her 2011 play Sexy Béton, about the tragic collapse of the de la Concorde overpass was a huge box office success and was nominated for the prestigious Prix Michel Tremblay Award in 2012.

to think critically together about current social issues”

In 2011-12, Annabel collaborated with Toronto-based Crow’s Theatre director Chris Abraham to write Seeds, perhaps the company’s best-known play – having been presented to over 39,000 Canadians in five provinces. It’s a David vs. Goliath true story about the legal battle between Saskatchewan farmer Percy Schmeiser and the chemical giant Monsanto. Percy objected to the GMO seeds produced by Monsanto blowing onto his land and fields. Having the iconic Canadian actor Eric Peterson in the lead role gave additional credibility and audience appeal to the production. Seeds was translated by Fanny Britt in 2012 and Grains was staged at La Licorne. 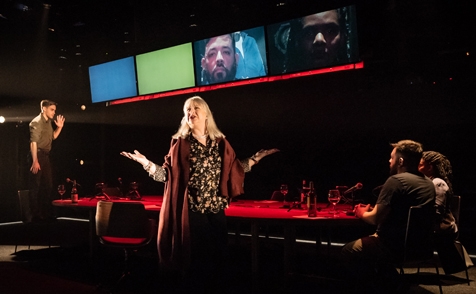 The Assembly invites the left and the right to face each other in a live setting and to attempt to transcend their ideological labels through listening
Photo: Maxime Côté

Porte Parole, along with Chris Abraham’s Crow’s Theatre received an important co-commission in 2013 to produce a documentary drama for the 2015 Pan Am/ Para Pan Am Games in Toronto. Directed by Chris Abraham, Annabel’s resulting play The Watershed toured in five Canadian cities. Annabel and Chris were included on the Globe & Mail’s Artists of the Year for 2015. It too, was translated into French by Fanny Britt and Le Partage des eaux was performed at Usine C.

In 2014, Annabel asked award-winning Quebec actress Christine Beaulieu to write a documentary drama about Hydro Québec. “Christine produced J’aime Hydro, which placed the artist at the centre of the public discourse. We were performing to capacity audiences in 1,000+ seat theatres all through Quebec. Over time it’s become a ‘cult’ thing.”  J’aime Hydro became an instant success; and was performed at the 2016 Festival TransAmériques, and was purchased by Just For Laughs for the 2017 festival. Christine Beaulieu was shortlisted for the 2018 Governor General’s Award for J’aime Hydro; and she won the Prix Michel Tremblay Award in 2017 for Best Dramatic Text. And as with Eric Peterson participating in Seeds; Christine Beaulieu lent her star power to Porte Parole because she believed in the artistic and societal contributions that Annabel and Porte Parole were introducing to live theatre. 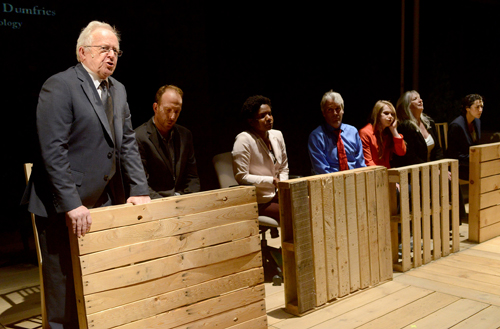 During our conversation, Annabel stated; “We’re better known in the Francophone community that the Anglo community, largely because of the successes of Sexy Béton, J’aime Hydro, and Fredy (the documentary play about the tragic shooting of Fredy Villenueva by Montreal Police).”

Audiences have reacted favourably to the Porte Parole style of documentary theatre, with solid ticket sales for Annabel’s plays. The productions are based on real events in the news, often using dialogue lifted directly from news videos. Going from strength to strength, Annabel, her husband Alex and Brett Watson have created the structure for The Assembly – perhaps the company’s most ambitious theatrical project to date.

Celebrating a 20th Anniversary is an accomplishment for any business; even more so for one that is based in the performing arts milieu. Porte Parole has continued to thrive by daring to break new ground in a way that has captured the imagination of theatre-goers. At the same time – they are bringing a younger demographic to existing theatre audiences by presenting current issues that resonate with them. Bravo!

For more information about Porte Parole Productions, please visit their website: www.porteparole.org For tickets to The Assembly at The Segal Centre for the Performing Arts, please visit: www.segalcentre.org

Western societies are increasingly polarized, with dangerous intolerance on all sides. The objective of The Assembly is to bring people of differing ideological beliefs into one space to present and discuss their differences, and to then create a play based on the results of the meetings. The ‘real people’ are from different cultural, personal, political and social backgrounds. They meet and collectively confront the issues that most divide them. The recorded material from the discussions and interviews is then developed to produce different Assembly episodes, with professional actors taking on the roles of the people who met in the development meetings. The process is a logical progression from the use of existing news coverage of news events.

The productions first debuted in 2018 at Crow’s Theatre in Toronto and ESPACE GO in Montreal. The latter production involved four women who discussed the issues of Islamaphobia, feminism and Quebec national identity. If these productions could be considered a live test of the concept – it was an immense success. Critics and audiences reacted positively.

The first American production of The Assembly was staged in Maryland this past December during the 2019-2020 season of the Clarice Smith Center for the Performing Arts at the University of Maryland.