Ripley’s Believe it or Not! Times Square has permanently closed, effective November 28, 2021

NEW YORK- I have previously visited Ripley’s Believe It or Not! In Niagara Falls and London, England.  Despite walking by the place every time I was in the Big Apple, I never ventured inside what is recognized as a historic Times Square museum. This one-of-a-kind attraction welcomes visitors to immerse themselves in the unusual, the unexpected and the unbelievable. It features a collection of over 500 unusual artifacts from all over the world, as well as amazing interactive exhibits that are sure to make you say “WOW!” 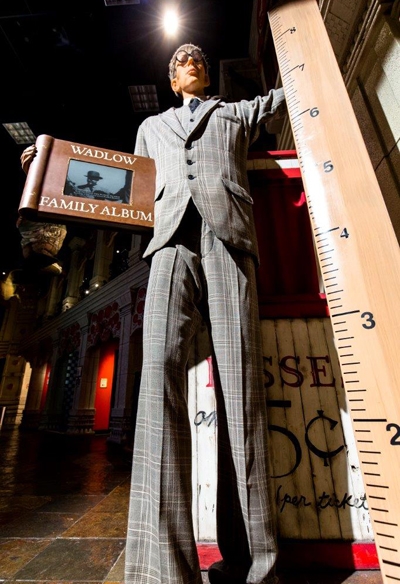 A replica of the World’s Tallest Man at Ripley’s

Ripley’s Believe It or Not! Times Square showcases some of the most incredible exhibits found in New York City, many of them discovered and owned by Robert Ripley himself. This family friendly attraction is the largest Ripley’s in North America.

Robert L. Ripley was a cartoonist, explorer, reporter, adventurer, and collector who traveled to 201 countries in 35 years seeking the odd, the unusual, and the unexplained. He led a life of adventure and excitement, and he will forever be remembered for coining the phrase “believe It or not.”

In his search for incredible stories to draw in his popular newspaper cartoons, he acquired hundreds of exotic artifacts from around the world. Collections of his newspaper cartoon drawings were released in book form. The success of his first book led to a live radio show, and then to a weekly television program. He shared his unique artifacts at World Fairs in exhibits called odditoriums, which were the precursor to the museums that bear his name and famous phrase.

Ripley’s Believe It or Not! Times Square is the largest Ripley’s attraction in the world. From shrunken heads, Megaldon jaws, a Tibetan skull, the world’s tallest man and a real meteor; the amazement never ceases in this place.

All children must be accompanied by an adult. Most guests spend between an hour and a half to two hours exploring the strange and unique artifacts, exhibits and interactive experiences at Ripley’s Times Square. As with any attraction or museum, your personal tastes will determine how long it takes. If you plan to dive into every item and read each caption, you’ll be here a bit longer. If you plan to focus on featured galleries, you will find that two hours is sufficient. I found the visit both educational and entertaining,

Ripley’s personal treasures can be seen in Believe It or Not! attractions around the world. Each museum is unique in its collection of oddities and in their presentation. No Ripley’s Believe It or Not! museum would be complete without the “old favorites” however – the incredible people whose stories Ripley gathered on his journeys around the globe. These strange people are brought back to life in detailed wax figures.