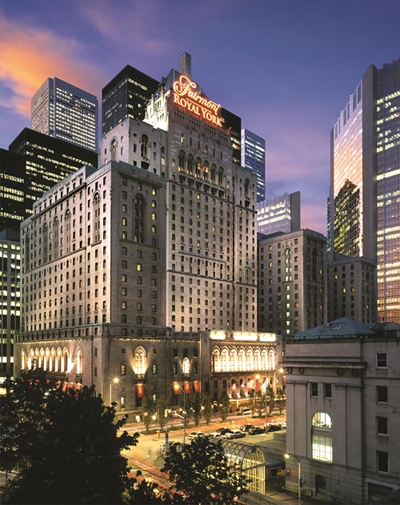 The Fairmont Royal York Hotel has recently completed a years’ long renovation program that has given this historic property a renewed and contemporary elegance. With 1,300+ guest rooms and suites, immense convention facilities and ballrooms – it’s the biggest transformation in the Fairmont hotel group. Walking through the main floor lobby, we were caught up by the bustling energy of the activity, especially in the main lobby Clockwork lounge bar. The designers have struck gold with their remodeled lobby – the Royal York is once again the cool place in downtown Toronto; a place to see and be seen; just as it was the centre of Toronto’s high society generations ago. 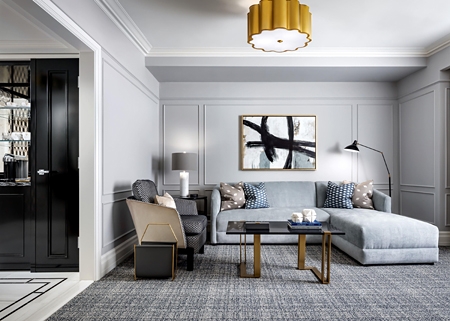 Fairmont Gold suite parlour, with the entry and bar at the left

During our tour of the hotel, I commented that; “This is not your grandfather’s Royal York”. Our guide Erin O’Driscoll qualified my observation, saying; “Yes, but we want grandpa and grandma to feel comfortable here at The Royal York. We were able to update the decor and at the same time preserve the grandeur and elegance that is the hallmark of the Royal York.” 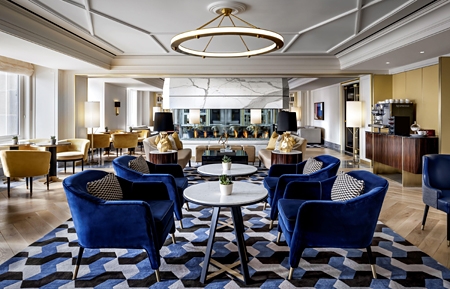 Armed with our pre-registration instructions, we bypassed the main lobby and continued to the main elevators and the Fairmont Gold check-in on the 18th Floor. The Fairmont Gold accommodations have been expanded to occupy floors 12 through 18; anchored by an exquisite Fairmont Gold lounge/lobby that features enormous contemporary gas fireplaces, expansive seating areas and panoramic views of the city. “Gold” guests are offered complimentary full breakfasts, early evening hors d’œuvres and an honour bar. Barista-style coffee and tea are available throughout the day. Individual work stations are equipped to accommodate your electronic devices. A comfortable library is located at one end of this lounge. 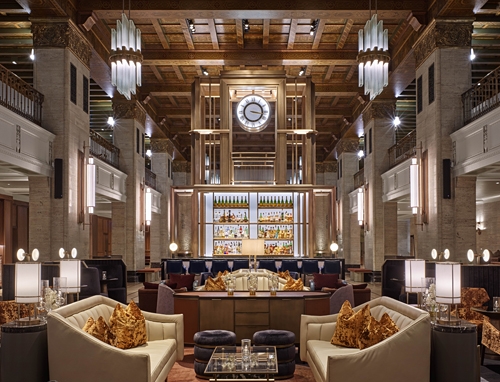 The re-imagining of the guest rooms and suites was done with the objective to recognize and preserve the heritage of the hotel, and at the same time include an updated decor and amenities that are the hallmark of current first class accommodations. All the boxes have been checked with the Royal York’s transformation. From the moment you enter, the grandeur of the main lobby has not only been retained – it has been enhanced. In fact, everything in the Royal York is on a grand scale – including the yards wide hallways and elevator banks. 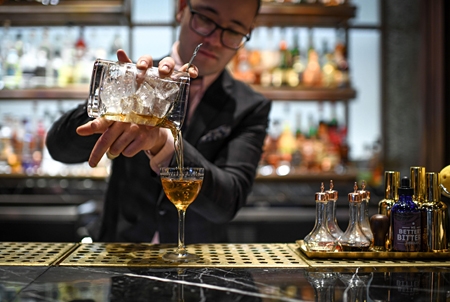 The hand-painted lobby ceilings and beams are still there. The motifs are inspired by the Renaissance art of Northern Italy, plus the national symbols of Scotland, Ireland, the United Kingdom and France. The ‘clock’ has been replaced by a huge modern clock that serves as a backdrop for the Clockwork bar. Led by mixologist Rus Yessenov (formerly of Montreal) Clockwork offers a return to the glory days of the cocktail. The signature cocktail is fittingly named Meet Me At The Clock and begins with an absinthe-misted class, and a mixture of Hendricks gin, Moet & Chandon, lemon, a dash of bitters and cooled with a rosé ice ball. In a nod the days of transcontinental train travel from nearby Union Station, the comfortable chairs and sofas in Clockwork are reminiscent of the seating on those elegant Pullman coaches. Hostesses equipped with iPads that monitor available seating ensure that you are seated quickly and served promptly. 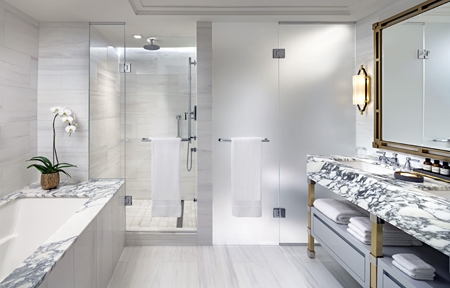 The accommodations and personal amenities are everything you’d expect in a first class hotel – and even more. The rooms have elegant pearl grey walls with white trim. Mottled grey and white carpets complete the contemporary and relaxing colour scheme. All the rooms are equipped with Nespresso coffee/tea makers, a good selection of glassware and a well-stocked minibar. High speed Wi-Fi is complimentary for Gold guests. The bathrooms are decidedly next generation, with an aromatherapy option for the shower. Using pod technology similar to a coffee maker, guests have a choice of several scents that are released with the shower water. A great way to re-set before heading out to a show or dinner after a busy day or sightseeing or work. 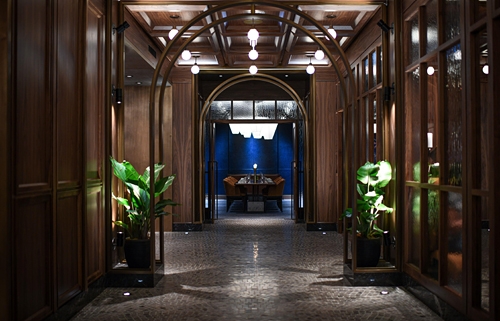 The main entry to REIGN and its
five dining areas 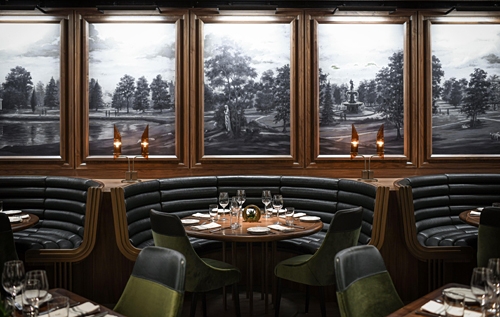 REIGN is reminiscent of an English manor house

We enjoyed a superb dinner in REIGN. The menu is inspired by French cuisine, and honours Oceanwise Certification, and purchases produce and meats from farmers and producers within a 100 km radius of Toronto. I enjoyed an outstanding beef tenderloin that was melt-in-your mouth tender. Other menu items include lobster thermidor, escargots, oysters, lamb tartar, butter roasted BC sablefish, brown butter scallops, and wild boar chop. By now you can see that dining in REIGN is a gastronomic treat. The full menu is available on the hotel website.

The Royal York now bakes all of its own bread and pastries in-house, and the REIGN Bakery is adjacent to the restaurant and REIGN Bar. On our way into dinner there was a lively crowd enjoying live music in the piano bar. They were still having a good time singing along with the pianist and singer when we left the dining room a couple of hours later. 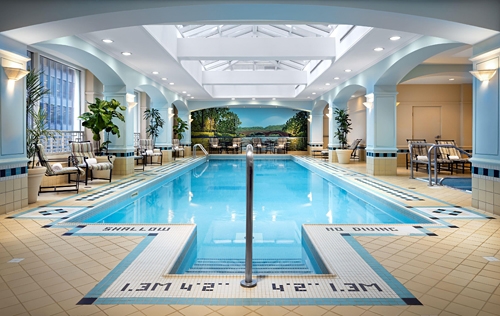 Even the Royal York’s pool is elegant

This urban resort has a good-sized fitness centre equipped with state of the art equipment and the ever-popular free weights. The main attraction is the pool; large enough for swimming lengths or having fun with the children. There are two good-sized hot tubs on the pool deck.

The always popular Library Bar is still located just a few steps up from the main lobby and it remains a popular meeting place for guests and local citizens. We have friends who – when visiting Toronto – let their friends know that they will be ‘hosting’ at the Library Bar from 2 until 5 pm. Works every time! 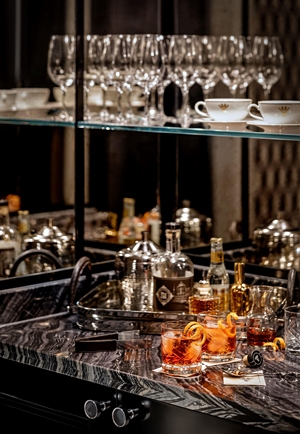 If you have business or social events to host in Toronto, you’ll want to consider the meeting rooms and ballrooms. Their transformations are spectacular, and the elegance of their decor has surpassed their original glory days. The Canadian Room can accommodate 1,670 guests for a reception. The Italian inspired decor of the Ballroom was previously restored, including the repair and restoration of the ceiling painting: Venus on her swan chariot. It’s magnificent. 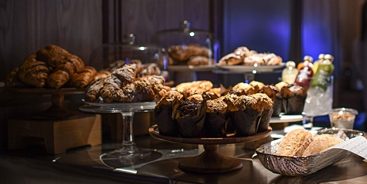 REIGN Bakery – all baked goods are now made in-house

The Benihana Restaurant is still located in the Royal York, just inside the York St. (west) entrance.

Whether traveling to Toronto for business or pleasure, I’m sure that you’ll find the re-imagined Royal York will meet and even surpass your expectations. Fairmont’s flagship hotel in Canada full is not resting on its laurels, but rather is forging full speed into its second century of service. Enjoy! www.fairmont.com/royal-york-toronto

While undertaking the biggest hotel renovation and transformation in the company’s history, Fairmont management knew that they would need a special set of talents for the position of Executive Chef. The food services division of the immense Royal York occupy the equivalent of four storeys in height and a city block in length, employing 100 chefs. 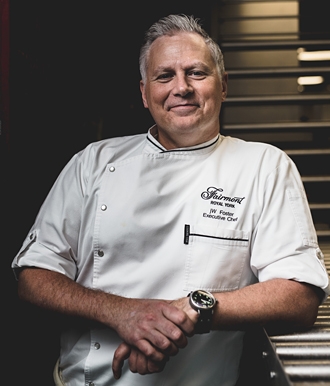 Enter jW Forster with seventeen years experience managing Fairmont kitchens in Dallas, San Francisco and Shanghai, in addition to several Canadian locations, after starting with the Royal York in 2002. By chance, after working in several restaurants, jW took on a position of hotel Executive Chef when he was only in his mid-twenties. He’s worked in that capacity ever since, bringing a vast experience to the Royal York.  “I love food, and I want to make it right. I do my best to instill that commitment to everyone in our kitchens. I ask them to ‘cook with your heart – give people that little shiver when they taste something really good that you’ve prepared’.”

“The Royal York is a heritage hotel, and we recognize that there are expectations that we must live up to. To that end, I’ve moved all of our baked goods in-house. We’ve also re-opened our in-house butcher shop. All of our soups, sauces, and baked goods are made from scratch – which is a significant trend in commercial kitchens today, and we’re part of that trend.”

“I’m a graduate of George Brown College, and I like to encourage their students to work here, to take on apprentice positions and have the experience of working in a huge facility like we have here. It’s important to remember that while we serve thousands of meals every day – it’s the meal that our guest is served that is the important one.”

“We serve a lot of the classics, but we also branch out with options such a Chateaubriand prepared with Bison. We adhere to the Ocean Wise Certification, which means that the fish we serve are not from an endangered species or from a location that is being overfished. Our fish and seafood come from Canada’s East and West Coasts. ‘Farm to Table’ is not just an expression. We’re proud that we contract with 125 farms in Ontario within 100 kms of Toronto for our produce and meat. We buy most of our cheeses from Quebec – and they’re delicious!

In closing, Executive Chef jW P Foster re-states; “I love food… and I want to do it right. That’s my commitment to our Royal York guests!”