Every spring, The Segal Centre for Performing Arts hosts a press conference that is as unique and unusual as the hub of creativity at the corner of Cote Ste-Catherine and Westbury. While the purpose is to announce the theatre productions for the upcoming season; the event is also the coming together of a community of actors, producers, writers and musicians. As you would expect, media reporters are in attendance; but so too are season ticket subscribers and most of the centre’s staff. The latter are not there to swell the attendance numbers – they are present because they too are part of this wonderful centre of creativity. It’s like a huge extended family where everyone is welcome. It’s a party – a celebration of the Arts and a salute to those creators who bring us performances that reach out and touch us in our hearts and innermost selves.

The Centre has an exciting lineup of programming for its 2019-2020 season “that is filled with new adventures, new stories, and new worlds to discover”. Artistic Director Lisa Rubin firmly believes that first-rate theatre can be entertaining and transformative, with the power to strengthen and connect communities. She has planned a theatre season that features six productions that will take audiences on “astonishing and emotionally inspiring journeys”.

“The Segal Centre’s 2019-2020 season has been carefully curated and is brimming with raw emotions, dynamic performances, and robust storytelling. Bringing together established smash hits and exhilarating new works, this season embodies the magical and unpredictable spirit of theatre. Great theatre can move you, transport you, and immerse you in a world entirely different from your own. It’s an escape from the everyday, and we can’t wait to share this journey with you,” says Artistic and Executive Director Lisa Rubin. 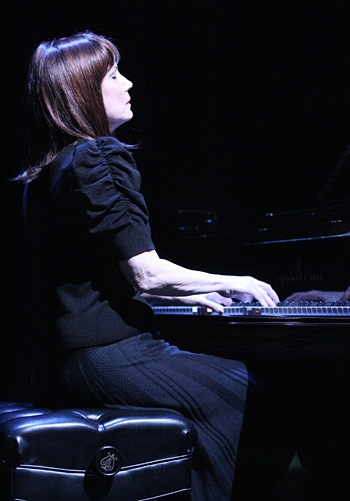 The season starts off with The Pianist of Willesden Lane, based on the incredible true story of Lisa Jura, a young Jewish piano prodigy whose talent proved to be the key to her survival during World War II. This inspiring story of hope and endurance is told by her daughter Mona Golabek, a piano virtuoso herself, as she performs some of the world’s greatest classical music from composers such as Bach, Beethoven, and Chopin live on a Steinway concert piano. This production; adapted and directed by Hershey Felder, will be in the Sylvan Adams Theatre from September 8 to 29.

From October 27 to November 17, 2019, the Segal Centre produces the North-American premiere of a new musical Mythic by Marcus Stevens and Oran Eldor (orchestrator for The Apprenticeship of Duddy Kravitz: The Musical and The Hockey Sweater: A Musical) and directed by Brian Hill, who directed the immensely popular adaptation of Belles Soeurs: The Musical. Mythic takes audiences to hell and back, literally. Inspired by the Greek myth of Persephone, Queen of the Underworld, and her goddess mother Demeter, this Broadway-bound pop/rock musical explores mother-daughter relationships, finding your place, and being true to yourself. With a cast of characters that presents each god as a different pop-culture celebrity, Mythic is an epic and rocking good time. Once again, Montreal audiences will be seeing a production that is destined for theatres in New York, Toronto and abroad.

From February 9 to March 1, 2020, Small Mouth Sounds turns The Studio into a wellness centre as six ordinary people seeking a break from city life go on a silent retreat in the middle of the woods. Directed by Segal Centre Artistic Associate Caitlin Murphy, this awkwardly and absurdly funny new play is a theatre experience unlike any other. Told largely without words, this play is a poignant reminder to put the phone down once in a while and be ‘in the moment’.

Audiences are invited on a musical trip down memory lane in The Times They Are a Changin’ starring Louise Pitre and W. Joseph Matheson. Following their success in the Segal Centre’s 2018 production of The Angel and the Sparrow, the pair is back for a concert celebration of the Jewish artists of the 1960s. From March 1 to March 22, the Segal Centre will be filled with the beloved music of Bob Dylan, Mama Cass, Simon and Garfunkel, Leonard Cohen, Carole King, and many more.

Few are aware of what led up to the iconic photo of Israeli Prime Minister Yitzhak Rabin and Palestinian leader Yasser Arafat shaking hands on the White House lawn after signing the historic Oslo Accords. Marcia Kash (who last wowed Segal audiences with her staging of Prom Queen) shines a light on the events prior to the singing of that treaty in Oslo. This edge-of-your-seat political thriller dramatizes the secret behind-the-scenes negotiations that took place in a castle tucked away in a Norwegian forest. Gripping, vivid, and incredibly witty, this play swept every 2017 ‘Best Play’ award, including at the Tony Awards. From April 19 to May 10.

The 2019-2020 Segal Centre theatre season wraps up with the world premiere of Siberian Summer by Paul Van Dyck (When Memories Have Us, Paradise Lost) and directed by the incomparable Ellen David. Three women “of a certain age” embark on the adventure of a lifetime as they board the Trans-Siberian Railway from St. Petersburg to Beijing with one of their begrudging sons and a no-nonsense Russian tour guide in tow. Brimming with humour and heart, this extraordinary journey of self-discovery is sure to be the laugh-out-loud, feel-good hit at the beginning of next summer. From May 31 to June 21, 2020.