With the support of a team of more than fifty people, Sylvain’s main responsibility will be to maintain the high quality standards of the five hotel’s restaurants, Le Table & Terroir, Le Saint-Laurent, Le Charlevoix, Bar La Brise and Le Point Cardinal, as well as within the hotel’s banquet functions. Sylvain’s creative spirit will be put into play as he will be working closely with local suppliers and his team of Sous-Chefs to develop new menus according to seasons. “One must share knowledge with others in order to preserve, enhance and perpetuate this age-old trade and art that unites all cultures, and our guests must remain at the center of everything we do” he said in a recent interview.

Native of l’Ile Perrot in Quebec, Sylvain has more than 35 years of experience in the culinary field. In 1989, Sylvain joined the ranks of the Ritz-Carlton in Montreal as Head Chef and later became Sous Chef for Hotel Tadoussac. Between 1991 and 1994, he was appointed Head Chef at Chateau Lake Louise before returning to Montreal at the Intercontinental Hotel. For the next five years, Sylvain worked as Executive Sous Chef at Vancouver’s Capilano Golf & Country Club West. He joined Hélène Darroze’s Le Relais & Château in Villeneuve-de-Marsan in France in 1999 prior to his return to Vancouver where he will successively be appointed Executive Chef of Grouse Mountain Resort and Executive Chef at River Rock Casino Resort where he stayed until 2014. He held the position of Executive Restaurant Manager at Grand Villa Casino Burnaby until November 2018. 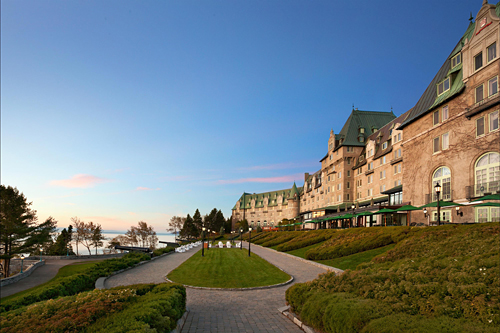 Sylvain has participated in many culinary competitions as a judge for the British Columbia Chef’s Association, the Canadian Produce Marketing Association as well as other major events. He worked with a number of education and certification organizations including the Vancouver Community College Professional Advisory Group, the Industry Training Authority Sector Advisory Group and the Go2 Program Advisory Committee.

Sylvain was trained at the Institut de Tourisme et d’Hôtellerie du Québec in 1988 and obtained his Chef certification from the Canadian Culinary Federation (CCFCC) in 2004. He also holds the Canadian Interprovincial Red Seal (CSR) and Canadian Council of Directors Apprenticeship (CCDA) certifications.

With his extensive experience, spirit of mentorship and commitment to innovative cuisine, Chef Cuerrier is a welcome addition to the culinary team at Fairmont Le Manoir Richelieu.