Pizza Salvatoré is a significant success story, with 61 franchises and counting. Thus far there are a handful of locations in and near the Greater Montreal area, including Dollard, St. Leonard, Laval, Repentigny, Terrebonne and Mascouche, as well as the South Shore. They have expanded to New Brunswick and Nova Scotia, with Ontario (London) next on their radar screen.

It all started in 1964 when Angèle Fecteau, a native of Chaudière-Appalaches, and Salvatoré Abbatiello, originally from the province of Benevento in Italy, established their first pizzeria in Saint-Georges de Beauce. This soon became a family operation, with the couple’s seven children getting involved. In 1987 Pizza Salvatoré franchises started to surface. It was only in 2018 when five of the founders’ grandchildren, Guillaume, Élisabeth, Sébastien, Katarina and Frédéric Abbatiello, took over the reins of the family business that expansion started to explode. To give you a better idea, there were 13 franchises when they took over. In the fall of 2020, just months before the COVID-19 hit all businesses hard, the grandchildren set a goal of opening a new restaurant a month. Despite the shutdowns, they have met their objective and more.

This is a take-out and delivery format. Known for its delicious pizzas and poutines, the fast-food chain has succeeded on the strength of the family entrepreneurial spirit. Let me recommend their Chinese Fondue and BBQ Chicken pizzas, chicken wings (they have a variety of choices) and the decadent hot and soft eight inch cookie sprinkled with crushed M&Ms.

For more details on locations, the menu and opportunities to become a franchisee, log on to www.salvatore.com.

MTLàTABLE: The 10th edition of MTLàTABLE in November was a resounding success. Over 92,000 patrons dined in some 115 participating restaurants during this grand culinary celebration. The event generated over $6.5 million in economic spin-offs.

In this period of recovery, restaurateurs felt that this event was more than welcome: “A wonderful experience bringing strong traffic at a time of the year when restaurants need it!” According to a survey, more than 80 percent of the owners who responded said that MTLàTABLE attracted a new clientele that is looking forward to the next edition. I was among those for certain, checking out St. Houblon and Pullman. 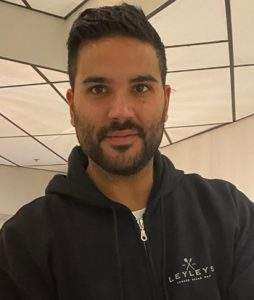 Yves Lalumière, President and CEO of Tourisme Montréal stated “MTLàTABLE is a key culinary celebration in the North American capital of gastronomy that is Montréal. We are thrilled to contribute to the city’s economic vitality by encouraging foodies to discover the richness and diversity of Québec products. Citizens and visitors alike have graced the city’s tables during this event for the last 10 years and we are determined to continue democratizing Quebec gastronomy.”

LEYLEYS: The sister and brother team of Lea and David Malka have opened a new kosher restaurant at Decarie Square called Leyleys Trendy Salad Bar. Lea, 24, was educated as teacher and David, 32, has a background in construction. Prior to the pandemic Lea operated a small restaurant in the same location on the second floor of Decarie Square. She and David reopened in October 2022, operating weekdays from 9 am to 4:30 pm. Leyleys has already gained a steady clientele, notably during the lunch hour. Their menu features breakfast items from eggs, pancakes, fruit bowls and avocado toast served until 11am. There is also an array of signature salads, focaccia, specialty pasta, poke bowls, sandwiches and paninis, tapas, pastries and muffins.