Nearly 200 activities, most of them free, will be offered from Saturday, March 2 to Sunday, March 3 in nearly 140 locations spread across seven boroughs throughout the city— and some 300,000 people are expected to enjoy them. This year, the Nuit looks towards the future: discover visionary works, new points of view, and surprising futuristic performances! An amazing time-travel journey that will give you a promising taste of what the future holds!

Nine Hubs to Wander Around the City All Night

You can experience the Nuit anywhere! On March 2, the entire city will teem with activities, divided over nine hubs and twelve categories: action, visual arts, film, dance, exhibits, fantasy, games, light, words, music, comedy, and multidisciplinary. Here are a few suggestions to give you an idea of what awaits you:

Quartier des spectacles Hub
Acting as the epicenter of the Nuit blanche, the outdoor site of MONTRÉAL EN LUMIÈRE will offer a diverse array of activities! At Chalet Bell and the Énergir stage, concerts will make you dance all night. First, Beat Market and their guests invite you to a party you’ll remember for a long time: electronic music played live with skillful improvisation.

Around Place des Festivals and the Place des Arts Esplanade, have a drink at the Bar Coors Light and enjoy the activities that will continue non-stop until 3 am: the RBC Sports Zone with its RBC Zip-line, the Place de la famille du Lait with its Urban Slide, the INCREDIBLE MAPLE World with its Ferris Wheel, as well as installations combining art, light and technology by Illuminart, presented by Casino de Montréal. The Promutuel Assurance squad is there to immortalize your best moments at the site and offer you a souvenir photo that you can pick up at the kiosk in the format of your choice. You’ll also be able to warm up with a Tim Hortons coffee, the official coffee of the Nuit blanche, at their truck, as well as try to score against a virtual goalie at the Tim Hortons Head-to-Head Challenge. Delight your taste buds with the drinks available at Bistro SAQ, be it a delicious glass of wine, cider, or the famous Quebec cocktail, Quebec Royal!

At Complexe Desjardins, you will take part in a refined culinary experience by attending a technical demonstration hosted by Élyse Marquis and given by former candidates of the last edition of LES CHEFS!. Top off your experience with a tasting that will feature a perfect harmony of cider and bite-sized delicacies to delight the most discriminating palates!

Downtown Hub
At the Canadian Centre for Architecture, six special guests will propose a toast to a person, a place or an idea they would like the whole world to forget. Each toast will be followed by lively musical performances. At the Montréal Museum of Fine Arts, an evening itinerary has been designed around the Thierry Mugler: Couturissime exhibit with visits, a creative workshop and a musical performance inspired by the famous artist’s muses. The McCord Museum will take you on an adventure throughout the history of Canada and into the future. At the southern end of the hub, at L’Arsenal, Festival du nouveau cinéma will introduce you to the festive, inclusive world of voguing with Gérald X Reyes, who will give a demonstration and a class, in addition to a screening of Brazilian documentary Bixa Travesty.

Quartier latin and Village Hub
Watch some live sculpture in virtual reality interwoven with graffiti at the Fresh Paint gallery. At UQAM’s Pavillon Sainte-Catherine, you’ll be immersed in La mécanique des fluides, which will make you experience the natural power of water. At the Grande Bibliothèque, young and old will get to participate in a phosphorescent party at L’Espace Jeunes, as well as a “Giant Living Library.”

Hochelaga Hub
At the Olympic Stadium, the public will enjoy the pleasures of winter with life-size games, a chalet space, a snow skate park, a natural skating rink, and a mini-slide. At the Olympic Park Sports Centre, you’ll also find a series of inflatable Witbit modules on which you’ll have as much fun as a kid! Bistro Le Ste-Cath will host a literary battle based on storytelling, poetry and slam. With random themes and constraints, each player will have to start or continue a story, then return it to their opponent. It should be a blast! The Marc Gosselin gallery will showcase several artists from urban and contemporary backgrounds, in addition to presenting experimental noise music performances.

Old Montreal Hub
The La Petite Vie exhibit will take you into the world of that cult TV show at Pointe-à-Callière! You’ll even be able to watch a selection of the best episodes and to dress up as your favourite characters at the photo booth space! At DHC Art, you’ll participate in a phosphorescent, symbolic dance, a painting workshop designed by Leisure. Phi Centre will let you gaze at the future with its artistic happening, which will include an audiovisual installation as well as musical performances. At the Galerie Bloom, discover new artworks created by Montreal artists with the future in mind.

Plateau-Mont-Royal Hub
At Jeunesses Musicales Canada, young and old will groove to the beats of never-heard music on a dancefloor, exploring futuristic fantasies via movement — while wearing pyjamas! Cat’s Corner invites you to a unique world tour of swing dances.

Mile End Hub
Explore textile screen painting, with retro-futuristic, cyberpunk or intergalactic motifs created with fluorescent colours at Atelier Circulaire! Fabric and thread will be available at La Société Textile for a night of “craftivism” (craft + activism), where you’ll be invited to embroider the future! Contemporary ice skating company Le Patin Libre will take over the Saint-Louis arena to showcase the incredible talent of its artists and make you dance on the ice.

North Hub
At the CHU Sainte-Justine Research Centre, families will unlock the secrets of the mystery forest in the company of Scientix the Owl, who will guide them around the nocturnal laboratories.

Art Souterrain
For its 11th anniversary, the Art Souterrain festival, in the context of its “True or False” theme, will present a unique artistic itinerary throughout the indoor underground network of Montreal. Witness the destruction of artwork by major painters, discover two performers chasing each other, discuss superstitions, listen to surprising news all night, and more! Spread across different buildings, the circuit will include mediators to guide and inform festivalgoers about the works, as well as meetings with artists and performances.

Travelling During the Nuit
The metro will exceptionally be open all night (standard fees apply). The Unlimited evening pass ($5) allows unlimited travel between 6 pm and 5 am the next morning.

All You Need to Know About the Nuit blanche
This is only a glimpse of the activities of the 16th Nuit blanche à Montréal. For everything you need to know, head to the website nuitblanchemtl.com — you will find all the details, a map of the activities, suggestions of thematic itineraries, and much more! #NBMTL 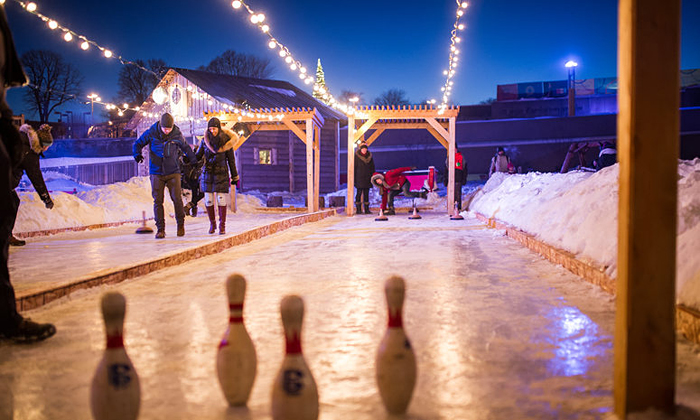