The McCord Museum invites visitors from here and elsewhere to explore the immersive experience of Shadows Without Borders until January 6, 2019. Holding lamps, they’ll discover shadow puppet creations imbued with the history of the refugee camps of Greece and Turkey. Created by the Montreal duo Mere Phantoms, the participatory installation asks visitors to reflect on exile, what binds our identity and the strength of our connection to that irreplaceable place called “home.”

“In presenting Shadows Without Borders, the McCord Museum is hoping to raise awareness of the importance of issues of immigration in a metropolis like Montreal and facilitate dialogue between new arrivals and Montrealers of longer standing. The public will be invited to experience the Mere Phantoms’ artistic process by creating paper cutouts on the theme of exile and immigration,” says Suzanne Sauvage, President and Chief Executive Officer of the McCord Museum. 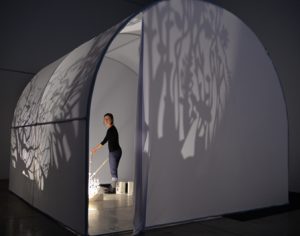 Greece and Turkey, refugee havens
In 2013, the outbreak of the Syrian civil war marked the starting point of an unusual project for Maya Ersan and Jaimie Robson of the duo Mere Phantoms, who create works of art inspired by traditional shadow puppetry. From narratives of violence and despair sprang the idea of a unique and unifying project that could be experienced and exhibited all over the world, outdoors, with no need for special facilities. Several years later Shadows Without Borders was born, a participatory installation that was run for the first time with the cooperation of families taking refuge in the camps and satellite cities of Greece and Turkey: Turkey is the country that has taken in the greatest number of migrants since the start of the refugee crisis.

Lighting up daily lives with shadow play
The goal of Shadows Without Borders was ambitious. Beyond the technical challenges of creating a mobile work, the artists of Mere Phantoms wanted to offer a moment of joy in a setting that was unusual, to say the least. The work was warmly received: seeing their cutouts turned into huge projected shadows gave the participants a sense of empowerment. Through organizations that assist refugees, the artists made contact with families in the camps.

“In Greece, we met a very creative little girl with incredible energy. We spent several days with her in a community centre in Athens that served families who weren’t yet in a camp. So we’re talking about a really, really vulnerable community. The little girl was four years old. She had been through some extremely traumatic experiences and wasn’t talking anymore. When we started working with her and she realized what was happening, she made contorted and screaming faces,” said artist Maya Ersan. 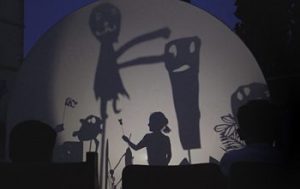 Unique creative process
Shadows Without Borders is the result of an artistic process that builds on Mere Phantoms’ creations in a new way. Rather than concentrating on the project’s architecture and technical aspects, the artists made audience involvement the crucial element. Creating a mobile work has its own constraints, however, such as providing a location to project the shadows (hence the idea of the portable tent) or finding lamps with batteries strong enough to animate the creations. “For us, the project is the beginning of a new process, one that enables us to make our art and our way of working with shadows accessible. That way we can reach people who are not usually in contact with art or who are marginalized.”

Action and reflection
With Shadows Without Borders, the McCord Museum, dedicated to the preservation, study and appreciation of Montreal’s social history of yesterday and today, is seeking to stimulate visitors’ thinking and engagement. Furthermore, the work will evolve throughout its presentation as additions are made by new arrivals in Canada, who are invited to express their ideas of home (what does “home” mean?), the host culture (how would I like to be welcomed, if I were a refugee?), identity (do I have two countries, two “homes”?), cultural diversity (how do I strike a balance between preserving my own cultural heritage and integrating into a new host culture?). Subjects that speak to us as Montrealers and as a society.

Over the holidays, from December 22 to January 6, families are invited to share their experiences on the theme of welcoming: how to “welcome” and how to “be welcomed.” A mediator will be on hand to facilitate dialogue and work with families to create paper cutouts. Plus, a creative paper-cutting workshop will be offered continuously throughout the installation’s run.