It took a well-meaning friend, a fellow cancer survivor, and a leading cancer research scientist for René Després to get the help he so desperately sought. Chance brought the 66-year-old pancreatic cancer patient to the McGill University Health Centre (MUHC) and Dr. George Zogopoulos, a member of the Cancer Research Program at the Research Institute of the MUHC, after an initial diagnosis elsewhere. Now, it is the innovative research nurtured by his visionary physician that brings hope to René and that keeps him going each and every day.

René was diagnosed with pancreatic cancer last spring. He went to his family doctor after suffering from what he thought was a bad flu. He was rushed to the emergency room when his skin took on a yellowish hue and even the whites of his eyes turned yellow.

“For me, a pancreatic cancer diagnosis meant two to three weeks to live,” says René. In my head, that’s what it was.” 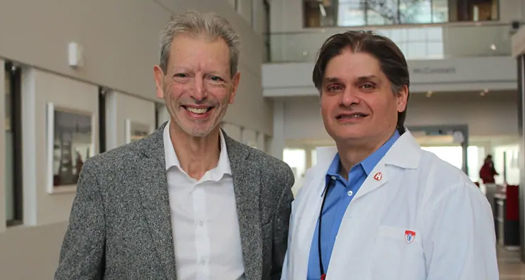 Dr. Zogopoulos (right) and his team treated Richard Beauchamp with an individualized, tailored treatment based on his unique genetic makeup. Richard is now in his 4th year of remission.

René was diagnosed March 15, and by May his treatment had not yet begun. The weeks of waiting, and the looming threat of a rapidly progressing disease had René making funeral arrangements and settling his affairs. As he and his longtime wife Nicole waited in fear and growing desperation, a chance referral through a mutual friend brought a beacon of hope. The mutual friend suggested René speak to Richard Beauchamp, a man with his own miracle story to share.

Richard was diagnosed in 2014, and like so many pancreatic cancer patients, he was given just a few short months to live after his tumor was deemed too large to remove through surgery. Dr. Zogopoulos and his team treated Richard with an individualized, tailored treatment based on his unique genetic makeup. The team discovered a hereditary mutation, a recurrent mutation in the PALB2 gene that occurs in the French Canadian population, and found that it was responsible for Richard’s cancer. Understanding what caused the cancer enabled Dr. Zogopoulos and his colleagues to select chemotherapy specifically targeted to attack the kind of cancer subtype Richard was suffering from. Ultimately, they were able to shrink the tumor to a size small enough to extract through surgery. Now, four years later, Richard is cancer free.

“Most patients come to us with little hope of a cure,” admits Dr. Zogopoulos. “A good fraction of my practice is people searching for a second opinion. For me it’s just important that they feel that they are not alone.”

Dr. Zogopoulos’ patients come from across Quebec, flocking to his unique model of care. He describes his integrated approach as precision oncology, incorporating genetic counseling into patient care. Every patient that comes participates in his clinical trials, they all have the opportunity to take part, and most do – the participation rate is over 90 per cent. Patients meet with a counselor, a family history is taken, and a tailored treatment plan is built based on the findings.

This unique approach to treating pancreatic cancer is a core tenet of PancOne™, a first-of-its-kind national network created by Pancreatic Cancer Canada in 2016.  Through the network, Dr. Zogopoulos and other leading experts across Canada are brought together to share ideas, data and findings related to the disease.  Pancreatic Cancer Canada, through PancOne™, recently donated $150,000 to the MUHC Foundation to help ensure patients with advanced pancreatic cancer like René and Richard will have access to healthcare in a clinical trial setting.

For more information on the McGill University Health Centre Foundation or if you would like to support individualized care for cancer patients, visit www.muhcfoundation.com.