By his own account, Norman Steinberg has always been a disciplined person. He is tanned and lean, and at ease in the spotlight. His casual nickname, “Norm,” belies his accolade filled resume and reputation as one of the country’s leading corporate lawyers.

Born and raised in Cote-Saint-Luc, Steinberg and his wife Renee still call the small demerged city home. The father of two attended McGill, and studied science as an undergraduate, before completing his law degree from the renowned university.

“I almost by default became a doctor,” Steinberg remembers during a recent interview at the McGill University Health Centre’s (MUHC) Glen site. “I was on the wait list for medical school and I realized that I had made a fundamental mistake and that I wasn’t suited for medicine. I think it’s a great career but it wasn’t the right choice for me. So I went to visit the law school while I was pondering what to do with my life.” 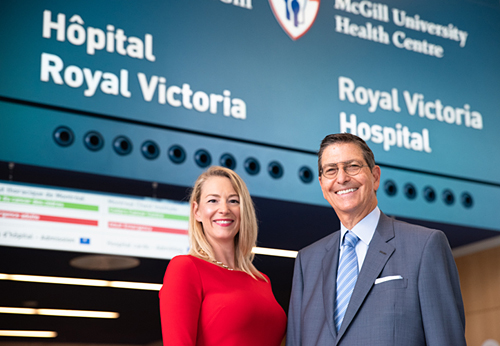 After spending just one day with the admissions director at McGill’s Faculty of Law, Steinberg was confident he had found the right profession, one better suited to his temperament and interests. Though he doesn’t come from a family of established professionals, Steinberg was able to draw on the business experience he learned from his father.

“I’d always loved business, and I was always a nerd. In grade six, I read Fortune magazine every week. I realized that with law I could combine my interest in business with a professional career and it turned out to be the best move I ever made. I think I would have been a terrible doctor, but I have really enjoyed my life as a lawyer.”

Steinberg’s grandparents were Russian Jews who fled persecution in their home country at the turn of the 20th century, settling in Montreal’s Plateau neighbourhood. Their journey helped inform Steinberg’s own outlook and commitment to giving back.

“My grandparents arrived in Canada, about 120 years ago now, escaping with their lives from Russia where there was growing anti-Semitism,” he says. “Canada was a very welcoming place. At the time, they didn’t speak French or English, yet they came straight to Montreal, where there was a large Jewish community that was evolving.”

Steinberg’s interests aren’t limited to legal questions or mergers and acquisitions. He has served on the boards of many of the city’s premier institutions, including the Montreal Symphony Orchestra, the Montreal Museum of Fine Arts Foundation, the Centaur Theatre, and Centraide of Greater Montreal, where he was also Co-Chair of the 2007 Centraide Montreal Campaign. He is an avid reader, who loves photography and travel with Renee.

“I’ve always had lots of interests,” admits Steinberg, “ever since I was a kid I’ve been interested in everything. I’m a prolific reader, I have lots of hobbies, I love travelling, and I love music. So a lot of the things I’ve been involved in are sort of natural things for me, things I personally enjoy.”

Steinberg believes the Foundation’s role is a crucial one when it comes to providing superior patient care at the MUHC.

“I’m going to quote one of our leading physicians and Surgeon-in-Chief at the MUHC, Dr. Gerald Fried. What Gerry said is that our Foundation makes the difference between mediocrity and excellence in healthcare. We work to ensure that we can have hospitals that go beyond mediocrity in all respects.”

The Foundation works to ensure that the MUHC healthcare and research teams have state-of-the-art facilities and equipment and sufficient resources to be at the forefront of medicine.

“We are able to recruit the best doctors to the MUHC, because they know that they are stepping into an excellent hospital and research institute. This happens in large part due to philanthropy. It is the reason why our donors and volunteers are so important to building a truly great hospital.”

Steinberg is Chair Emeritus of Norton Rose Fulbright Canada, the first Canadian legal practice to go international. From 2005 to March 2017, Steinberg was Co-Chair and then Chair of Norton Rose Fulbright and its predecessor firm, Ogilvy Renault. As a professional who has built his law career on mergers and acquisitions, corporate finance, privatization and corporate governance, Steinberg understands the ripple effect of having a strong hospital.

“I’ve seen the flip side of it. When our clients are recruiting a new CEO in Montreal, what does the CEO and their family consider? They look at the healthcare system, the schools, and the museums,” notes Steinberg. “They look at all of those things before they make a decision to come here. It could be the best company in the world that is based here, but they aren’t going to come if we haven’t first ticked off the boxes of great hospitals, great restaurants and museums, great schools.”

Steinberg was named Chair of the Board of Directors at the MUHC Foundation’s annual general meeting September 12. He succeeds Anna Martini, Executive Vice-president and Chief Financial Officer at the Club de hockey Canadien, Bell Centre and evenko. To learn more about the McGill University Health Centre and its Board of Directors, or to donate to the Foundation, and invest in research, teaching, and the best care for life visit muhcfoundation.com.