Like a musical Mecca, a trip to Nashville is a pilgrimage for music fans. 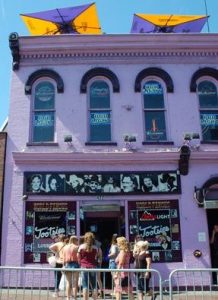 Found on the Cumberland River, in the center of Tennessee, Nashville’s sights and attractions have helped it claim a spot on the National Geographic Traveller U.K.’s 2018 Cool List.

For my first night in Nashville, I have come to immerse myself in the daily live music festivities that long ago claimed lower Broadway Street. Affectionately known as Honky Tonk Highway, these few blocks have witnessed the rise of countless country music legends. Open from approximately 10am to 3am, with no cover charge, each honky tonk serves cold drinks, and has at least one stage where musicians play and sing their hearts out. A lavender building houses the most famous honky tonk – Tootsie’s Orchid Lounge. Tootsie’s, once frequented by the likes of Willie Nelson, Kris Kristofferson and Loretta Lynn, packs in three floors of patrons with its new roof-top bar. A neon guitar fronts Robert’s Western World, where traditional country music takes pride of place. At Legends Corner the hundreds of album covers lining the walls keep my eyes endlessly wandering from one iconic cover to another. Just walking along the crowded sidewalks of lower Broadway, listening to the music that emanates from every door – the atmosphere is undeniably electric.

The Mother Church of Country Music 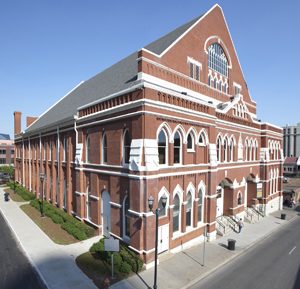 Built in 1892 to house religious revivals, the venerable Ryman Auditorium has hosted operas, ballets, Broadway musicals, political debates and from 1943-1974 the live Saturday night radio show known as the Grand Ole Opry. Here, seated in curved wooden pews, audiences were regaled by trailblazing performers like Hank Williams, Patsy Cline, Chet Atkins, Bill Monroe and Johnny Cash. Renowned for its acoustics, this hallowed hall is still a popular music venue and has even seen Bruce Springsteen and Coldplay take to the stage in more recent years. 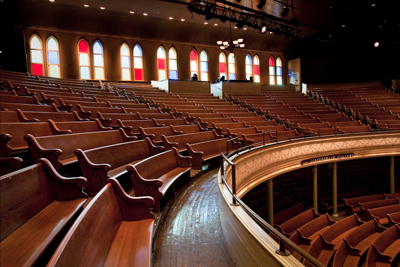 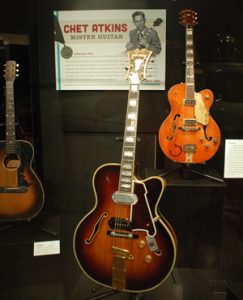 At the Country Music Hall of Fame the self-guided tour begins with a brief over view of the birth and early years of country music. Following the chronology of the last hundred years, the exhibit includes numerous guitars; among them Martin guitars from Jimmie Rodgers and Hank Williams, a Gibson owned by Maybelle Carter and a Glen Campbell Ovation.  On display are countless stage costumes, ranging from a locomotive embroidered jacket owned by Hank Snow, to a Reba McIntire navy blue sequined dress and the leopard print outfit worn by Shania Twain in her “That Don’t Impress Me Much” video. Some of the most interesting pieces are Dolly Parton’s hand written lyrics to “Jolene” and Kris Kristofferson’s hand written lyrics to “Help Me Make It Through the Night”. On a larger scale is Elvis’ “Solid Gold” 1960 Cadillac. The car is white with 24k gold plated accents and a gold plated TV and record player in the backseat.
www.countrymusichalloffame.org

The Country Music Hall of Fame with its distinctive
windows patterned after the black keys on a piano.
Photo: Tennessee Department of Tourist Development

Located along the famous Music Row, the historic RCA Studio B -“Home of 1000 Hits” – is a recording studio that not only helped create the “Nashville Sound”, but also saw Elvis record over 240 songs. The only way to tour the studio is to purchase a combined Country Music Hall of Fame and Studio B Tour ticket and then hop aboard the Studio B shuttle bus. While enroute to the studio your guide will delight you with stories of the artists that from 1957 to 1977 recorded their hit songs at Studio B. Chet Atkins is intimately associated with the studio. He was not only the visionary behind the studio, but also produced hundreds of hits on the premises. The studio tour culminates in a large rectangular room, where amps, pianos, xylophones and a drum kit rest along the walls. A Steinway grand piano is in one corner and on the opposite side of the room, on the beige and brown checked linoleum floor is a blue X – marking the spot where Elvis sang “Are You Lonesome Tonight?”. 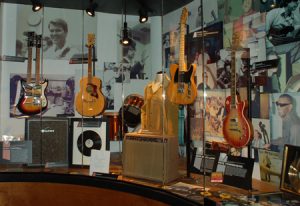 Part of the Los Angeles display at the
Musicians Hall of Fame.
Photo: Julie Kalan

The Musicians Hall of Fame celebrates both the well known and little known musicians that helped craft so many of the songs we love. The museum begins with a small display filled with old gramophones and radios entitled Edison to IPod – The Evolution of Recorded Sound. The rest of the museum is arranged by city – Detroit, Los Angeles, Muscle Shoals, Atlanta, Memphis and Nashville. This unique set-up allows for special attention to be paid to the talented studio musicians from each area. Instruments, photos and recording equipment pack the exhibit. The slogan for this multi-genre museum says it all, “Come See What You’ve Heard”. www.musicianshalloffame.com

The GRAMMY Museum Gallery®, located within the Musicians Hall of Fame, is the ultimate interactive experience. Visitors can play electric drums, keyboard, bass, guitar, sing and try out their DJing skills. The exhibits on songwriting, engineering and producing offer insights into the recording process. I only wish I had more time to try the video drum lesson from the one and only Ringo Starr! 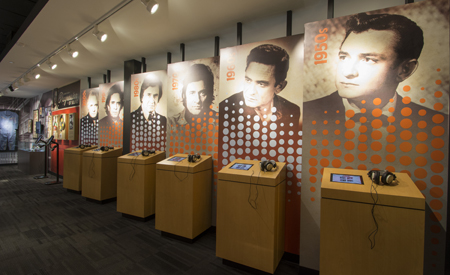 Both the Johnny Cash and Patsy Cline Museums are located in the same Third Avenue building in downtown Nashville. The ground floor is dedicated to the life and music of the iconic “Man in Black”. From his long illustrious career, the exhibit includes guitars, awards, hand written lyrics and stage costumes worn by Johnny and his wife June Carter. Tracing the years before his stardom, are his high school report card, class picture, and various items from his years stationed in Germany as a member of the United States Air Force. The museum even includes a section of stone wall from Johnny and June’s Hendersonville lake house, along with two stately chairs and other authentic furnishings.  www.johnnycashmuseum.com

One floor up, the Patsy Cline Museum gives visitors a look into her far too short life and career. Interestingly most of her stage costumes, from western fringed to evening gowns, were made by her mother Hilda based on the designs Patsy sketched. The “Walking After Midnight” songstress used to collect salt and pepper shaker sets when she traveled, and a great many of them are on display in her dining room hutch, alongside the dining room table. The museum has also recreated Patsy’s rec room, complete with the original TV, arm chair, record player, fridge and light fixtures. For something even more personal, there are interactive screens that allow you to “flip” through family photo albums.  www.patsymuseum.com 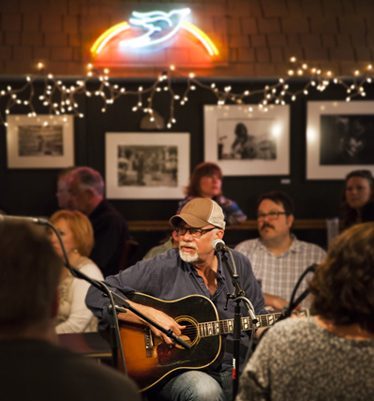 Songwriters in the round at the Bluebird Cafe.
Photo: Tennessee Department of Tourist Development

It All Begins with a Song

The famous Bluebird Cafe is located about 15-25 minutes drive (depending on traffic) from downtown Nashville. Not much to look at from the outside, the establishment is just a small storefront situated in a strip mall. Inside, seated at small tables about 100 patrons are privy to songwriters performing their original songs and telling the stories behind them. At each of the two nightly shows, four songwriters sit “in the round” taking turns playing their songs while accompanying the others instrumentally and vocally. The early shows feature the songwriters of tomorrow and the late shows feature established songwriters. Kathy Mattea, Garth Brooks and Taylor Swift can all trace their career trajectory to performing at the Bluebird. So you just never know when the next future star could be performing in this relaxed, casual and friendly venue. Reservations are always recommended.  www.bluebirdcafe.com

While in Nashville I stayed at the Renaissance Nashville Hotel. The bright and cheery accommodations were only upstaged by the friendly check-in staff who keenly offered suggestions for favourite area restaurants. Equipped with an indoor pool, fitness room and a lofty 24th-floor Club Lounge (available to Club level guests) the hotel is a favourite for business travelers. But it is the hotel’s optimal downtown location that makes it a choice pick for all travelers. The 673-room Renaissance Nashville is just a block from the Ryman Auditorium and only a few minutes walk from the honky tonks. https://renaissance-hotels.marriott.com/renaissance-nashville-hotel    612-255-8400

Nashville’s food scene has exploded in recent years. Here are some of the dining options that I had the pleasure of trying:

Pinewood Social: This unique restaurant, serving top quality cheeseburgers, lobster rolls and fried chicken, includes a full length 6-lane bowling alley. When the weather is warm you can enjoy bocce ball and ping pong on their large outdoor patio, or take a dip in one of two 4 feet deep lounging pools. The pool and patio have their own food and drink menu served from a shiny Airstream. www.pinewoodsocial.com

Answer: Located on a lovely semi-residential street, the restaurant has a bright and airy atmosphere. Seating is available at window-front tables and around a large central bar area. I recommend the bucatini, a lamb and pork ragu, and their wonderful mussels. www.answerrestaurant.com

5th & Taylor: Thanks to rustic and artistic decor touches the large industrial dining hall never feels cold or overwhelming. A horseback riding statue of General Francis Nash, the namesake of Nashville, is the clear focal point of the room. Highlights include sausage-cheddar biscuits and beer can chicken. www.5thandtaylor.com

Bajo Sexto: Located in the Country Music Hall of Fame building, this quick service restaurant serves tasty and spicy Mexican dishes; like tacos, quesadillas, and hand-made tortillas. Spanish for “sixth bass,” a bajo sexton is the largest guitar in a Mariachi band. www.bajosextotaco.com

More about the Man in Black 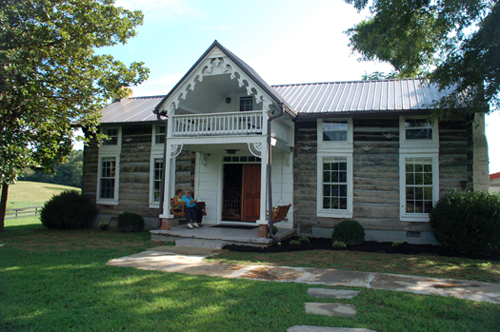 Forty minutes southwest of Nashville, the Storytellers Museum and Hideaway Farm offer further insights into the life of Johnny Cash. The Storytellers Museum, where Cash hosted his “Saturday Night in Hickman County” musical get-togethers, is now a memorabilia filled live music venue. Originally a general store, the decor blends guitars and records with stain-glass windows. From the little stage at the back of the room, live performances honouring Cash are held. The musicians often include members of Johnny’s family. When I attended the performers included Johnny’s nephew Mark Alan Cash, a very talented guitarist, and Johnny’s eldest grandson Thomas Gabriel (whose voice is deep and resonant, just like his grandfather’s). A mile down the road is the Hideaway Farm that belonged to Johnny and June for over thirty years. You can tour the pre-civil war built house, a small gallery housing family photos from the Cash home in Jamaica – known as Cinnamon Hill, and a large shed holding several cars, including the last car Johnny Cash ever bought, a 1990 Mercedes. The surrounding land is so picturesque that it is easy to see why Johnny called this place “the center of my universe”. Check ahead for opening times. www.storytellersmuseum.com