As a child growing up in Vancouver and Montreal-West, Tobie Miller could think of nothing more beautiful than the music of Johann Sebastian Bach, which she says followed her throughout her musical life. She grew up listening to and playing his music in many different and varied forms – both original versions and adaptations.  For Tobie, it was a natural next step to adapt some of Bach’s most beautiful solo works to her instrument. 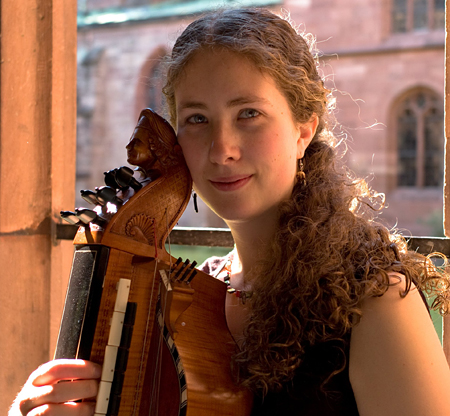 Now a world-renowned hurdy gurdy player, as well as recorderist and singer, Tobie has recently released her first solo album entitled Bach: Solo on the German label Raumklang.  This critically acclaimed recording features her transcriptions of Bach works for unaccompanied violin and cello in a virtuoso performance on the hurdy-gurdy.

The hurdy-gurdy is an ancient stringed instrument related to the violin. Its sound is produced by a wheel or continuous bow that rubs on the strings. In French it is known as a vielle à roue. Although it is often used in both traditional and contemporary folk music, it is believed to have originated in either Europe or the Middle East during the 10th century AD and was a popular instrument in the French courts from the medieval to classical eras.

Tobie Miller grew up in a family of classical musicians. After completing her Bachelor of Music with High Distinction in Early Music Performance at McGill University, she moved to Basel (Switzerland) to pursue graduate studies at the prestigious Schola Cantorum Basiliensis where she completed an Aufbaustudium Diplom with High Distinction, and a Masters of Arts in Musical Pedagogy.

Tobie’s studies, including her work on the baroque hurdy gurdy and transcriptions of J.S. Bach’s solo cello and violin repertoire were supported by several grants from the Canada Council for the Arts, and by the J.B.C. Watkins Award.  Bach: Solo is the product and the culmination of this support.

Currently based in Basel, Tobie performs and records both as a soloist and with numerous ensembles, including the Ensemble Baroque de Limoges, Ensemble Leones, and Les Musiciens de St Julien. She frequently gives master classes throughout Europe and North America. In 2017 she and her Ensemble Danguy released La Belle Vielleuse – a critically acclaimed recording of 18th century French hurdy gurdy sonatas on the Belgian label, Ricercar.  A recording of The Seasons by Vivaldi – Chedeville, will be released in the next few months under the same label.

You can hear a preview of this newest recording of Vivialdi-Chedeville when Tobie appears in Jouez Hautbois, Résonnez Musettes with Les Violons du Roy at Salle Bourgie, 1339 Sherbrooke Street West, in Montreal on December 14 at 7:30 pm. If you happen to be in Quebec City, this same program will be performed twice on December 13 at 2 pm and 8 pm at La Chapelle de Québec , 995 Place Youville, Quebec.

For more information about Tobie Miller and her recordings, please visit her website at:  www.tobiemiller.net

For tickets to her performance with Les Vioions du Roy, please visit the ensemble’s website at: http://www.violonsduroy.com/en/programming/montreal-season