Aldo Mazza lives for music in general and percussion in particular. It’s his passion in life and his enthusiasm is infectious. Just a few minutes into our conversation, I found myself smiling and nodding in approval, caught up by his positive energy and vitality. The really good news is that the music events company “Kosa Music”, that Aldo founded with his wife Dr. Jolán Kovács, continues to thrive after twenty-three years. KoSA Music, one of the world’s premiere school’s home base, is right here in Montreal. The KoSA Academy is a full line music school offering private lessons in guitar, voice, piano, bass, ear training, theory, drum set, percussion for all ages and levels. Group classes are also offered in African drumming and Cuban rhythms as well as playing in a band.

Jolán plays piano and violin, and has degrees from McGill’s Schulich School of Music in music performance and a PhD in Music Education. She has been teaching for over two decades and is In high demand as a teacher teaching even across the globe via Skype.

Over the decades, Aldo and KoSA Music have become world famous. Here’s an example Aldo’s reputation. Last year, Earth Wind & Fire and Chicago had a day off prior to their double-bill show and The Bell Centre. They called their friend Aldo for some suggestions about what to do. “Come over to my studio and we’ll play music!” was his response. Later that day, the KoSA Academy at the corner of Beaconsfield and de Maisonneuve was filled with music and musicians connecting with students and friends. 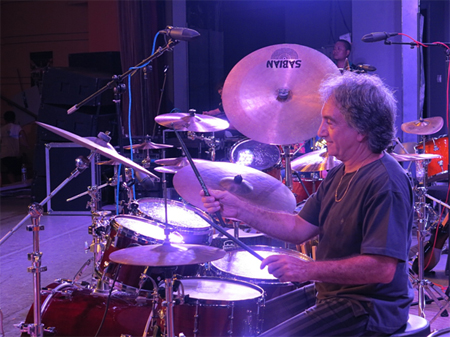 Aldo Mazza has a worldwide reputation as a
musician and teacher

Taking me on a tour of the building, Aldo showed me the teaching studios equipped with pianos, amps and two kits, one for the student and one for the instructor. The equipment store rooms have rows on rows of all kinds of drums and percussion instruments, just waiting for a pair of hands. Another studio room is home to vibraphones, marimbas and other similar instruments. This place breathes music!

A younger Aldo played drums with an Ottawa group called The Cooper Brothers. They had some success, but he realized that he wanted to learn more about drums and percussion. “I went to a drum camp in the US. I had no idea of what I was in for. I was a rock drummer, and they had instructors like Joe Morello , Bobby Christian and Gary Burton (jazz vibraphone). We only stopped playing and practicing to eat and sleep.” The experience left Aldo a changed man. He left Ottawa and everything behind, moved to Montreal and enrolled to study classical and jazz percussion at McGill University.

“While at McGill I joined a group with other percussionists called Répercussion, and we recorded and toured the world, doing 150 concerts a year. I was also playing on a weekly TV show, and once a week I’d fly into Montreal, do the TV show and rejoin Repercussion for our next show. While in town, I was very busy as a studio musician for records and jingles (TV & radio commercials). Over the years, I’ve played with such artists as Celine Dion to James Brown.” Repercussion has been performing for over forty years, although the group now focuses on special events, enabling the members to follow their own solo careers.

Twenty-three years ago, Aldo and his wife realized the potential for a drum and percussion camp like no other of its kind.  Imagine living and working with the world’s top artists for one solid week?  And so it began, the birth of “The KoSA International percussion Workshops and Festivals” which was established in Vermont for 20 years.  With the founder’s music accreditations, KoSA is able to offer university credit courses to any one of its programs worldwide. 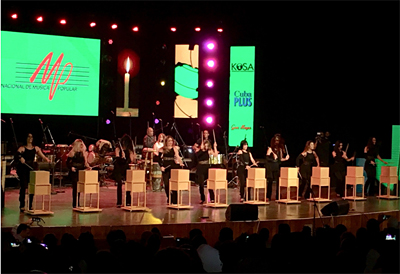 Seeing the success of the Vermont camp and its growing reputation,  Aldo in his own research and continuous expansion, became attracted to Cuban music and its rhythms, and began to study the complex rhythms of Cuba.  This interest in Cuba led Aldo and Jolan to establish, eighteen years ago, the first KoSA Cuba Festival Camp in Havana. KoSA Cuba is a week-long session of seminars, practical instruction and jam sessions devoted entirely to learning Cuban music . KoSA Music works in close collaboration with the Minister of Culture in Cuba and is one of the official sponsors of the reputable “La Fiesta del Tambor” (the Havana Rhythm & Dance Festival) which takes place simultaneously during the KoSA camp and is in fact part of the KoSA’s program. The camp takes place in the first week of March and is scheduled this year for March 3 – 10, 2019. KoSA Music also specializes in group travel to Cuba for schools and any other organizations.

With an organizational template in place, Aldo has adapted the concept to establish percussion camps and collaborations in China, the US, Canada and Italy.

In 2017, Aldo published an instructional book and accompanying DVD, Cuban Rhythms for Percussion and Drumset: The Essentials. The DVD contains 75 play-along tracks and 38 video clips. The publication has become immensely popular and is often used as a text reference in school music programs.  It is now being released in Spanish as well as in Chinese.

Aldo Mazza teaches privately at KoSA Academy, and recently had a professional musician from San Francisco come to Montreal for a week-long series of lessons. He continues to travel the world giving clinics, concerts and seminars; plus doing university residencies. With Repercussion he is a featured guest artist with leading symphony orchestras.

If you’d like to consider lessons at KoSA Music, your best bet is to schedule a visit. You’ll learn more than technique and notes from Aldo and Jolán. You’ll learn about dedication and the discipline of practice. The reward? You’ll become comfortable enough with your instrument to play it with assurance and abandon! www.kosamusic.com or 514-482-5554