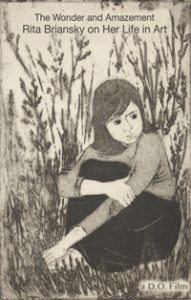 October 9, 2018
Dov Okouneff & Janet Best present their documentary
The Wonder and Amazement – Rita Briansky on her life in art focusing on the guest of honour,
Rita Briansky, who will also be present.
from 1:30 to 2:30pm
at the Unitarian Church of Montreal, 5035 de Maisonneuve West.
Free presentations in October; everyone welcome.
www.womensartsociety.com or 514-495-3701

Guest of Honour Rita Briansky:
Montreal artist Rita Briansky has had her paintings displayed in museums across Canada, the United States, Norway and France. Growing up in a small lumber town in Northern Ontario and then in Montreal, Rita was always a loner and non-conformist by nature. Now at 92 years old, while still painting, she imparts her ideas and talent as a teacher to seniors, helping them live more productive lives. Filmmakers Dov Okouneff and Janet Best share her life story and ideas as well as her beautiful, reflective works in this life-affirming piece of Canadiana.

Dov Okouneff (Producer/Director) was studying agriculture at the University of Florida in 1949 when he went with a Hashomer Hatzair group to Kibbutz Gal-On, where he worked in the orchards. In 1968, he left for Jerusalem where he founded The Audio-Visual Unit of the World Zionist Organization, producing documentaries on Israeli life. After coming to Montreal in 1977 for Friends of Pioneering Israel, he set up his own company, D.O. Film (1982), concentrating on Canadian and Jewish themes, such as Gabrielle Roy’s St. Henri, the Montreal Jewish Memories series, and A New Life on the Land: Jewish Farmers in Canada. He holds degrees in Political Science and Public Policy from Concordia University.

Janet Best (Co-Director/Editor/Camera), photographer and filmmaker, directed, edited and shot two documentaries – Norman Hall about the legacy of a troubled artist and The Dust of His Feet, the story of two Bangladeshi spiritual folk musicians. The latter film played at the 2011 Documenting Bangladesh Film Festival. As well, she has taught in a Cree community on James Bay and holds an B.A. and M.A. in the History and Philosophy of Religion. 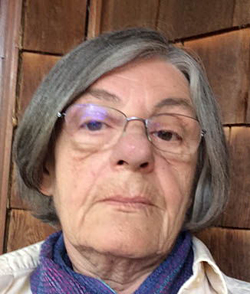 October 23, 2018
Interaction of threads and colour in the hands of weaver Anneliese Recklies often results in stunning fabrics. “From Fibre to Fabric – Adventures in Handweaving”
from 1:30 to 2:30pm
at the Unitarian Church of Montreal, 5035 de Maisonneuve West.
Free presentations in October; everyone welcome.
www.womensartsociety.com   or 514-495-3701

Anneliese is a self-taught weaver, and more of a technician than an artist. She says, “A woven material results from the logical interactions of the yarns, a process which fascinates me, perhaps because of my scientific background.”
Sc. (Biochemistry) 1971, McGill University
D. (Biochemistry) 1976, McMaster University
Principal Investigator, Shriners Hospital for Children, retired in 2013.
Her weaving skills improved tremendously upon joining the Lakeshore Weavers Guild in 2003 where she was able to learn from its members, many of whom are (or were) very experienced and highly skilled weavers. She has also participated in several workshops given by well-known weaving instructors such as Nicole Grennon (Leno Weaving), Jette van der Meiden (Twills and Lampas) and Adrien Landry (Navajo Weaving and Basketry). Her main interest in weaving is the construction of a functional, yet interesting and unique fabric. Anneliese is particularly fascinated by the interactions of colour resulting from different weave structures.
She was on the executive board of the Lakeshore Weavers Guild first as secretary and then treasurer (2006), then president from 2010 to 2015. She has taught several workshops at the Guild including Introduction to the use of weaving software in fabric design and Breaking free from the design restraints of standard threadings – the use of network drafting and parallel threading.

Title of talk: From Fibre to Fabric – Adventures in Handweaving
The construction of a woven fabric is the result of an orderly interaction of threads crossing each other, usually at right angles, resulting in a stable and functional fabric. However, as people have always had the desire to adorn themselves and their environment, weaving patterns have been designed, depending both on the use of threading networks and colour interactions, resulting in often quite stunning fabrics.
I will briefly touch on the history of weaving from ancient to modern times. Next, I will discuss the construction of woven materials, the types of fibres available and the tools used in the process. Lastly, I will show some examples of woven materials (my own and some I have collected along the way) to demonstrate how the interaction of threads and colour leads to a variety of patterns.