Montreal skiers are fortunate to have easy access to a plethora of good ski terrain nearby in the Laurentians and Eastern Townships – and just a little farther south in the mountains of New England and New York State. Many local skiers are familiar with the likes of Whiteface, Jay Peak, Stowe and Sunday River. But there is a wealth of terrific skiing in the southern Green Mountains. Prime among these is Stratton Mountain, an Intrawest resort with Tremblant-style base village with restaurants, boutiques and accommodation.

Intrawest was acquired this year by a corporate group that now owns or operates 13 ski resort across North America, among Steamboat in Colorado, Squaw Valley in California and, of course, Quebec’s Mont Tremblant. One of the corporate owners also owns Aspen. But it will be business as usual at Stratton this winter, and improvements and expansion resulting from the new ownership will begin to be seen next year and beyond.

Stratton is in the southern Green Mountains, which yield to the south and west to the Berkshires, Taconics and Catskills, part of the Appalachian mountain chain. At nearly 4,000 feet (1,200 meters), it is the highest peak in southern Vermont.

Stratton offers 97 trails covering 611 vertical metres (2,000 feet), served by 11 lifts. There’s a lot of snow, too, with average annual snowfall of 460 centimetres, bolstered by a state-of-the-art snowmaking systems with 1,200 guns that can cover its 271 hectares of trail terrain with a foot of snow in less than a week. And there’s always a good stock or natural snow in the 65 hectares of glades (tree trails). 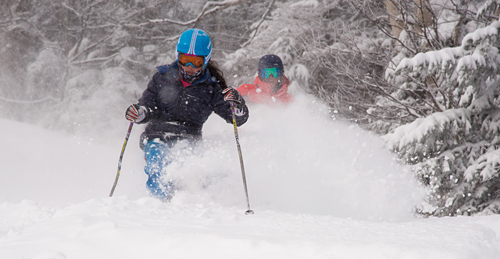 In typical Intrawest fashion, the trails are meticulously groomed, with some mogul sections and glade areas left untouched for the more adventurous. While there are some good “steeps”, most of the terrain is novice or intermediate/advanced, ensuring a lot of enjoyable cruising on skis or boards. Getting to the top is a breeze with a 10-passenger gondola, four high-speed “six-pack” chairlifts, and an assortment of quads and other chairlifts, as well as magic-carpet lifts for beginners. This network can transport more than 33,000 skiers per hour.

Unlike some of the skis centers to the north, Stratton is basically one single, substantial mountain. The lifts from its two base areas ultimately take you to the one summit. However, the trail network is divided into upper and lower sections, which allows for a variety of trail and lift combinations depending on your ability, energy level and frame of mind. 3 lifts serve upper mountain (two sixes and a quad).

Stratton’s main base lodge is beside the clock tower at the far end of the pedestrian village, from where the gondola, opened two years ago, provides a non-stop ride to the top from the main base lodge. Alternatively, the American Express six-pack chairlift takes skiers up to the mid-mountain level, from where you can ski across the one of two other high-speed chairs to the summit, URSA Express and Snow Bowl. You can grab lunch at the Mid-Mountain Lodge, which also offers dinner with transportation provided by snowcat.

The front face’s upper section has terrific, consistent fall-line trails. Of note is Upper Tamarack, with its has wonderful sweeping bends, while Frank’s Fall Line and Upper Standard pointing the skier straight down the mountain. Off to the far left as you leave the summit are East and West Meadows, offering lovely, quiet wide-open terrain. On the lower half is a plethora of gentle train for novice skiers, served by five different lifts, as well as four terrain parks.

The second base area is at the bottom of Sun Bowl. It has a restaurant and ample parking for those staying further afield from the base village. This face of the mountain has lots of glades together with some double-black-diamond steeps, served by a six-pack and a quad. There is also a tube park with its own lift. The Shooting Star six-pack chair takes Sun Bowl skiers up to the summit.

Heading down to Sun Bowl from the summit, enjoy an long, exhilarating run on Upper Middle Brook or Upper Downeaster, and then on to intermediate cruisers Sunrise Supertrail and Lower Downeaster to the base.

After an energetic day’s skiing there’s no shortage of spots in which to unwind. Mulligan’s and the Fire Tower are among the more popular bar-restaurants in the pedestrian village. Grizzly’s is a popular après-ski bar and restaurant — also great for lunch – and features Vermont craft beers. There are a half-dozen other eateries offering everything from steaks to Asian fusion, as well as a market and deli. New additions this season are Benedict’s, specializing in breakfast, and Sara Beth’s, an ice cream shop serving locally made Wilcox Dairy products. The village’s shops include several snow-sport equipment and clothing outlets, and a variety of high fashion boutiques.

Of course, there’s much more than eating, drinking and shopping to do when not on the slopes. There are 12 kilometres of cross-country ski trails as well as ample snowshoeing terrain, both accessed from the Stratton Nordic Center located at the Sun Bowl base. The center also rents fat bikes for use on designated trails. After the alpine lifts close, take a dog-sled tour with the Green Mountain Mushers.

Work out in the health club, play indoor tennis, or relax and regenerate at the day spa. In addition, Lolë Stratton offers a range of cardio-oriented activities, including yoga, zumba, bike spinning, snowshoeing and downhill skiing, let by qualified and energetic Lolë ambassadors.

The winter season includes a number of events and festivals, including 24 Hours of Stratton (Jan. 6-7, similar to December’s 24 Hours at Tremblant), Vermont Open Snowboard and Music Festival (March 9-11), and March diGras.

There are condo communities in the base village and in the adjacent Commons, as well as slopeside on the lower mountain. Townhomes and houses also are available, as well as 136 hotel rooms in Black Bear Lodge near the base. For details on the resort’s lodging choices as well as neighbouring inns and hotels, check the Stratton Mountain Resort website www.stratton.com/plan-your-trip/lodging or call 1-800-STRATTON. (1-800-787-2886)

How to get there

Via New York State: The most direct, surprisingly, is down through the edge of New York State and then cutting southeast into Vermont below Lake Champlain. Take A-15 to the U.S. border at Champlain, NY, and continue south on I-87 to exit 21, then follow NY-9N along the west shore of Lake Champlain south to Ticonderoga, then follow NY-22 south to Granville, where you take NY-149 east into Vermont, where you pick up VT-30 south into Manchester Center.