Passion: Hockey is a fabulous look at the fascinating world of our national winter sport. It also marks the centenary of the National Hockey League and the 125th anniversary of the Stanley Cup. The exhibition, adapted by Pointe-à-Callière from one developed by the Canadian Museum of History, features over 500 remarkable items and a collection of more than 1,200 hockey trading cards! 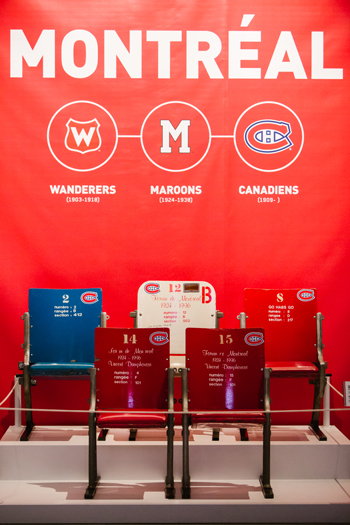 For over one hundred years, Montreal’s heart has been beating to the rhythm of hockey. Season after season, fans fill the seats, listen on the radio or gather in front of their TV screens to support their favourite team. And the city is spoiled, we have to admit: it’s represented by the oldest and most legendary team in the league, the Montreal Canadiens! Passion: Hockey celebrates and explores the different dimensions of this sport, including its popular roots, its evolution and its influence on our culture.

“It may be an anecdote, a favourite moment, childhood memories, players’ or fans’ hopes, or the devotion of parents warming arena stands on Saturday mornings… everyone has a hockey story to tell. Our city has always had a special relationship with hockey, and this year, the centenary of the NHL, is a perfect opportunity to explore the history of the sport. The Montréal Canadiens play a starring role in Passion: Hockey, of course – we couldn’t have an exhibition on this topic without focusing on our legendary team!”, explains Francine Lelièvre, Executive Director of Pointe-à-Callière. 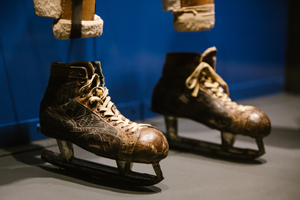 The items on display include Jacques Plante’s famous goalie mask, which clearly illustrates the innovations introduced to protect players. Hayley Wickenheiser’s skates, symbolizing her devotion and determination, are also featured, along with Maurice Richard’s and Vincent Damphousse’s Hall of Fame and Stanley Cup rings. A wax statue of Maurice Richard, graciously loaned by the Grévin Montréal wax museum, has also been given a place of honour.

For Geoff Molson, President and CEO of the Club de hockey Canadien, “The relationship between the Canadiens and Montréal has always been a story of love, passion and devotion. I’m delighted to see Passion: Hockey at Pointe-à-Callière, Montreal’s birthplace, since the exhibition salutes and reminds us of history, the strength of our community, our pride in being Montrealers and the bonds between Montréal and its hockey team.” 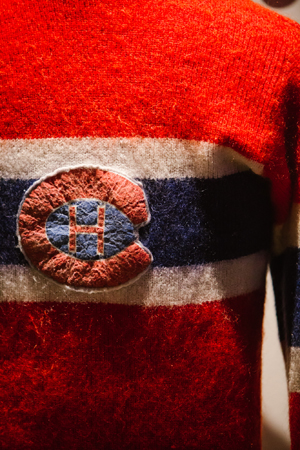 Last winter Pointe-à-Callière put out a call to collectors, and received over one hundred offers from hockey fans, more specifically supporters of the Montreal Canadiens. All kinds of exclusive and rare memorabilia recalling key hockey events and players’ feats, lovingly conserved over the years, has been loaned to the Museum and is on display for visitors’ admiration. Cards, hockey sticks, pucks, autographed photos, souvenir items – a huge variety of objects, but all of them symbols of devotion to a team and its history.

Montrealers’ moods sometimes rise and fall with “our” Canadiens’ wins and losses, and discussions around the office water cooler about their games and players’ performance can sometimes get heated! Habs fans will be pleased to see that a large part of Passion: Hockey is devoted to their favourite team. A coach’s game plan from the 1993 series (shhh! It’s a secret!) is sure to bring back memories for many visitors, just like the soup can portraying Maurice “Rocket” Richard, brought out following the riots that broke out when he was suspended in March 1955.

For Steve Bégin and Mathieu Dandenault, former Habs players and spokesmen for Passion: Hockey, the exhibition is a superb tribute to the history of hockey and the red, white and blue. “You can definitely feel players’ determination and guts, the competition and rivalry between certain teams, and you can understand why the Canadiens are a legend. Visitors of all ages, whether or not they’re hockey fans, will come away with a new respect for the sport and the history of hockey in Montréal. It’s really a magical experience,” says Steve Bégin.

From street hockey to the Stanley Cup

Hockey is in Montreal’s DNA. It’s part of the city’s history and its soul, its streets and alleyways. Over the decades, Montreal has earned itself an enviable status in the hockey world. Fans have cheered the Canadiens as they brought home 24 Stanley Cups, hard-fought games have led to record-breaking performances, and some legendary rivalries have emerged. Photos, videos and interactives will take visitors to “centre ice” and bring back memories and emotions. Visitors of all ages are sure to share in the excitement.