Nathalie Bondil brought a sense of exuberance and vitality when she first was appointed as the Executive Director and Head Curator of the Montreal Museum of Fine Arts. Her energy is undiminished, and we recently met to discuss the continuing success of ‘The Museum’ in Montreal, in the wider Canadian market and its growing stature on the international scene.

When I first met Nathalie in 2012, her mission was to bring more Montrealers into The Museum, to let them know that it is there for them.  At the time, we also spoke about the Michal and Renata Hornstein bequest and the need to erect an additional building to house the collection they planned to donate to the Musée des Beaux Arts de Montreal.

She joined the museum curatorial staff in 1999, and was appointed Executive Director and Chief Curator in 2007. Since then her initial objectives have been rapidly realized and then surpassed. She became a Canadian Citizen and was awarded the Order of Canada in 2015 for her work in promoting art and making art more accessible.

“We grew from 600,000 visitors in 2007 to 1,000,000 and then 1,200,000 last year. We were the #1 art museum in Canada in 2015, and we slipped a bit to #2 behind Toronto’s Art Gallery of Ontario (AGO) in 2016 – but we’re on track to be #1 in Canada again in 2017.” What makes this ranking even more impressive is that Toronto’s population is approximately 50% larger than Montreal’s. As reported in The Globe & Mail, The Montreal Museum of Fine Arts has “track record of highly attractive international exhibitions that had helped build a new museum-going habit for Montrealers, and were also successfully marketed outside the city.” As Chief Curator, it is Nathalie Bondil’s job to produce original exhibits and keep a watchful eye out for new exhibitions and opportunities to co-curate with other museums. She is well aware that popular exhibitions such as fashion designer Jean-Paul Gaultier bring new people to the museum – and that a percentage of those people come back to see the permanent collection and other exhibitions.

Does it work? It sure does! Membership has catapulted from 25,000 to its current 122,000+ and still growing. Smiling, Nathalie demurs; “We’re top in North America for membership.” Continuing; “The museum must serve our society is many ways. I think that Art is as important to our well-being as Sport. Scientists have determined that beauty is a physiological need. In our electronically connected society, we have become disconnected from each other. The Museum is a place to re-connect. It’s our role to open doors to the imagination.”

In Europe it would be like driving a bus”

Teaching is an important role for today’s museums. “In 2011, we had three teaching studios. By 2012 we were operating seven, and now we have twelve teaching studios. At The Louvre, there is one…” Continuing, Nathalie notes with pride; “We have the largest number of students in North America!” 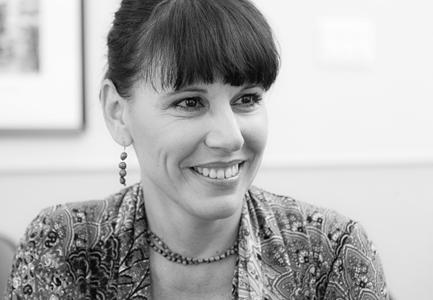 Outreach to the wider community has grown exponentially under Bondil’s tenure. “We have these beautiful works of art and a wonderful, peaceful building that we want to share.  Our outreach programs have grown to 450 associations, schools, universities and even hospitals. We have six Alzheimer’s groups and eight autism groups coming to The Museum regularly. We’re working with the Douglas Hospital who bring people with eating disorders. We know about the positive impact that Art has on your well-being; and these medical professionals are seeing results. ”

“Ste-Justine’s Hospital brings in teenagers who are suffering from depression and other mental health issues. The Museum is a lovely and calm environment, in addition to having all this beautiful art. We mix the teenagers together, those being treated and the well ones. No one here knows which ones are being treated – everyone is ‘healthy’.”

“Dr. Cecile Rousseau is a Professor of Psychiatry at McGill, and she brings in refugees. After all they’ve been through – coming to the place of beauty and tranquility is a relief for them. We just tell them; ‘Come in – you’re welcome here.’”

“Thanks to the generosity of the Rossy Foundation, we are able to bring Art Therapist Stephen Legari twice a week to run therapy sessions.”

At the other end of the age continuum, Nathalie outlines some of the programs in place for seniors. “Dr. Olivier Beauchet from McGill’s Department of Geriatric Medicine helps us with our programs for seniors. Reseau Selection regularly transports their residents to see our exhibitions. The Jewish General Hospital operates a Healthy Walk program right here in The Museum. The seniors put on their running shoes and off they go! There’s no weather inside The Museum – just beautiful art.”

“I think that Art is as important

to our well-being as sport”

“Beauty is a physiological need. Here at The Museum, people can deal with their emotions in a peaceful way. It’s our role to open the doors and welcome people to these beautiful buildings.”

“Look – we have all these great works; and as curators we know how to keep them, to look after them. We are learning from the groups that we bring in how to make sure that we are relevant and that we continue to be relevant. It’s interesting that by opening our doors to so many groups, we have learned a lot about ourselves and The Museum’s role beyond being a showcase for works of Art.”

“Louise Arbour told me that Canada is a young country and we are able to invent our future. I believe that Canada is important for this Century. Montreal is hyper-important as Canada’s cultural centre of influence, much as San Francisco is in the United States.”

“When I became a Canadian Citizen, I was told; ‘Welcome to Canada, it a country of opportunity – but not a guarantee.’ I still find that refreshing, and it inspires me to do my best for this museum, this city and my adopted country.”

“Here at the Montreal Museum of Fine Arts, the professionals and volunteers all share the same vision. We have an intergenerational outlook. Holding her arms wide apart and giving me her thousand-watt smile, Nathalie concludes; “We have world cultures living in togetherness, with immigrants from here to there! Montreal is a beautiful anomaly.”