Why should Montrealers care about what’s going on in the National Assembly?

Answering that question has become a full-time career for Yolande James. The fluently bilingual West Island native and former cabinet minister has become one of CBC’s key personalities. Sometimes she explains Health Minister Gaetan Barrette’s latest decisions or how party leaders get chosen. Other times she suggests what politicians might do when facing a crisis like the shooting at the mosque in St. Foy last month.

“What I try to do is to make issues as clear as possible so that people can make up their own minds,” she says.  “It’s a constant effort on my part to connect whatever is going on in Quebec City and communicate about whatever it is that affects you [so you can take action]. When things are not going the way that you think that they should, that’s when your voice should be heard. It’s not a time to step away. If you don’t like what you’re seeing, it’s time to step in, whether that’s marching or whatever. Of course, you should vote. Your voice needs to be heard.”

James’ commentary appears on many shows. She’s one of four ex-ministers on the lunch time television special Le Club des Ex that runs from Monday to Thursday on Radio Canada. She also chats weekly with Debra Arbec, the host of CBC Montreal News on television at 6 p.m. and with the morning and afternoon hosts of the Daybreak and Home-run radio programs. She also frequently serves as a member of the “power panel” on Power and Politics, the English political show that runs weekday afternoons on television and via podcast.

James’ ability to handle a daily television schedule stems from a political career in which intense media attention forced her to get comfortable in front of a camera. She was the youngest MNA and the first black woman to be elected to the provincial legislature when she won a by-election to represent the Nelligan riding in 2004 at 26 years old.

“It is a privilege to live in a place that’s diverse in so many levels,

not just in colour but in culture and language and everything.” 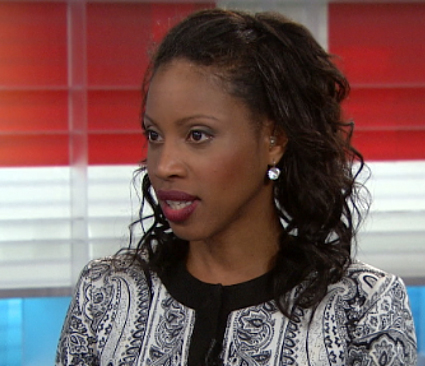 The fluently bi-lingual Yolande James has a law degree from Université de Montréal, and has suspended her television appearances on ICI Radio Canada and CBC News at Six as she runs for Stéphane Dion’s seat

The moment was a big celebration for James, who had served on the black history month organizing committee as a law student at the Université de Montréal just a few years earlier.

In fact, it was volunteering that led her into politics in the first place. From 1998 until the year before her election, James served as vice-president of the Liberal Association of Nelligan. She held the volunteer job through many day jobs, including developing curriculum for exceptional students in the West Island of Montreal, completing a law degree and working as a legal intern.

Once in government, James moved up fast. As a Montreal-born woman with foreign-born parents (her father is from St. Lucia, her mother is from St. Vincent), she was a perfect candidate for immigration leadership. Premier Jean Charest appointed her to become Parliamentary Assistant to the Minister of Immigration and Cultural Communities in March 2005.

She retained the position until the election was called two years later.

After winning the 2007 election, James became Minister of Immigration and Cultural Communities and the first black woman to hold a cabinet position in Quebec.

James is humble about her extraordinary success, but credits much of it to growing up in Montreal and her parents’ decision to educate her and her sister in both French and English. James attended Pierrefonds Comprehensive and Vanier prior to studying law at the Université de Montreal and Queen’s University.

“A lot of who I am is because of Montreal,” she says. “Growing up in the community where I grew up in and being French and English at the same time. I don’t know anywhere else where that’s possible. It’s really the privilege of diversity. I understand that it is a privilege to live in a place that’s diverse in so many levels, not just in colour but in culture and language and everything. That’s a privilege to live that. You realize that when you have a chance to connect with someone who hasn’t had that privilege.”

She headed up the immigration ministry until August 2010, but during her final three months, she juggled two ministries after being appointed Minister of the Family early in 2010.

Her Family Minister post demanded poise and control because public daycare workers were negotiating contracts. Private daycare workers gathered in front of James’ office to strike for equal pay. Despite its intensity, James says she enjoyed her political work, especially when she was able to make a difference in peoples’ daily lives.

“I remember setting up this program to help get young immigrants work experience,” she said. “This was something that hadn’t existed before and I remember seeing them afterwards and hearing how much it meant to them. Those are the moments that really count.”

James maintained her role as Minister of the Family until the Liberals lost the election in 2012. She then became Deputy Parliamentary Leader of the Official Opposition.

A year later, she had her son and began questioning whether she wanted to continue travelling to Quebec City so frequently.

“When things are not going the way that you think that they should,

that’s when your voice should be heard. It’s not a time to step away.”

Her answer was no so she announced her resignation from politics in February 2014 and left in June. During that same period, she and her husband, who had already been together for five years at that point, decided to get married.

“For us, it was about doing the party and being with the people that we love. Everyone has all these values…one of mine is that life brings you so many things, why would you ever deny an opportunity to celebrate something great? So for us, every birthday, every everything is a chance to celebrate. That’s one of the things me and my husband laugh about….we have to get the memories. We never miss a moment.”

James is particularly happy she took the chance to celebrate her marriage when she did because her father died suddenly shortly after, sending her into grief followed by retrospection.

“I’m no longer the youngest of anything,” she said. “I will be 40 in November. It’s a big year. This last year was a lot about reflecting where I am and where I want to go. I like that because it forces me to do the inner work about what works and what doesn’t. In my continual work, I keep thinking that I have so much to be grateful for. When I turned 30, if I had fast-forwarded to my life now, I couldn’t have envisioned anything better. I have all the elements that I want.”

In addition to her media commentary career, James remains active serving as a mentor to young women and as a foundation board director with the West Island Palliative Care Residence in Kirkland. She says she hopes to increase her work with young people as she continues to grow and change.

Tracey Arial writes regularly for Montreal Home and The Suburban and blogs at www.Arialview.ca.