Ninety Minutes from Montreal, Stanstead is a scenic town in the Eastern Townships, adjacent to the American border opposite Derby Line, Vermont.

Following three years of intense study, the stage has been set for the town of 3,000 residents to evolve into a cultural, artistic and educational centre; a destination for tourists, artists, nature enthusiasts; known collectively as ‘culture seekers’. A reinvigorated economy is expected to attract entrepreneurs and investors.

Already designated a village-relais by the Quebec government; ‘a welcoming municipality that provides travellers with a full complement of services.’ Visitors are mostly day-trippers and weekenders who visit year-round. The skiing is great at Mont Orford, as are summer activities on Lake Memphremagog. Stanstead has one of the most eclectic border crossings in the world, located in the Haskell Opera House that straddles the Canada/US border. 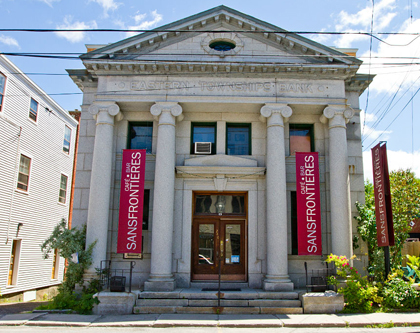 First settled in the 1790s by New Englanders, the town was the last Canadian stop on the Quebec City-Montreal-Boston stagecoach route. Grey granite quarries began large scale operations in 1865, and the valuable rock from fifty quarries in the region became the foundation of the local economy, employing hundreds of local workers.

An economic anchor and major employer in the town is Stanstead College. Founded in 1872, this private elementary and high school attracts applicants worldwide to its 600-acre campus.

While the town has three border crossings, it is the unmanned one that draws the most interest. Located inside the Haskell Library and Opera House, the international boundary is marked off with a black line across the library floor. Opened in 1902, most of the seating in the historic building is in the U.S., while the stage and library shelves are in Canada. The Haskell, which hosts concerts and plays each summer, attracts tourists who come specifically to traverse this international border with extraordinary public access.

Visitors are impressed by the town’s charm; from its tree-shaded streets to its deep New England roots. Upwards of a million and a half travellers pass through Stanstead’s border crossing annually; providing a significant potential for tourism.

The goal of the not-for-profit Centre des Arts Stanstead is to make the arts, in its varied forms, an essential component of community life. It aims to do this by promoting artistic expression, advancing cultural literacy, and honouring the area’s creative heritage.

Leading the initiative is Gabriel Sadie and his wife, Eva Juul who have purchased eight buildings in town – including the Old Customs House, the historic Eastern Townships Bank, the Granite Museum, as well as the old Border Theatre.

The Border Theatre (formerly His Majesty’s Theatre) on Stanstead’s main street played a central role in the life of the community until its closing in 1972. Now in the development stage, the plan for the resurrected theatre is to maximize its potential as a year-round venue for cinema, live theatre, dance, music, the visual arts and other cultural and educational events. The main hall will be named “Salle Sutherland” in honour of actor Donald Sutherland, who lives in the area. 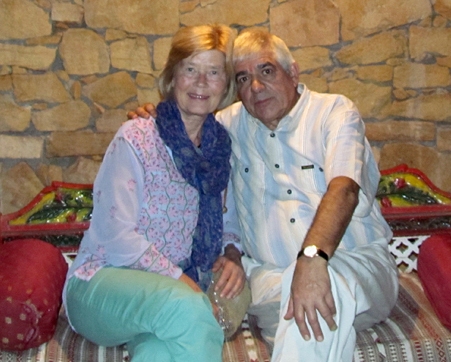 Gabriel Safdie and his wife Eva Juul own several buildings in Stanstead, including The Border Theatre which they will donate to the town

Safdie and Juul plan to donate the building (which will meet LEED environmental standards) to the town. After the business plan’s release this spring, they will seek funding from private foundations and government heritage funds to make The Border Theatre the nucleus of Stanstead’s ongoing renaissance. The experiences of other towns that have prospered from the arts are models of what can be possible.

The Shaw Festival in Niagara-on-the-Lake in Ontario began in 1962 with two plays staged in a converted old courthouse. Today the town has four theatres which host the second largest repertory theatre company in North America. The Festival des Arts de Sainte-Sauveur, founded in 1992, has stimulated tourist traffic and attracted top performing artists.

Stanstead could evolve in unimagined ways, given the initiatives already surrounding the Centre project. Three churches have been purchased by local residents with plans for renewal (one as a restaurant). This past fall, several employees of Stanstead College opened a free after-school tutoring program (called Phelps Helps) in a donated space to reduce the local student drop-out rate. Sealander Waterworks recently announced two renewable energy projects: one creating fuel pellets from trash; the other producing the equipment to convert it. The opening of a data centre hosting an international fiber optic crossing could position Stanstead as a hub for creative research and potential cross-border business co-operation.

The growing number of ‘culture seekers’ will increase the move towards ‘craft tourism’ recently featured in The New York Times. Michael Carin’s article described how ‘culture seekers’ “are people whose principal motivation for travel is to gather unique cultural experiences. Such travellers are usually affluent, highly educated, and middle-aged or retired. When they arrive in a place they tend to stay longer and spend more.” Carin’s article continues; “It’s a fact that the holidays these people take are less about leisure than about learning. They do indeed want “to get away from it all” on their vacations, but they want the escape to take them into an engagement with history, an immersion in heritage, an encounter with local culture.”

“It’s another fact that exploring small towns, visiting quirky museums, and experiencing history through architecture are all high on the list of things that the culture seekers like to do. What these tourists seek, in fact, is authenticity,” concludes Carin.

Drawing a comparison with Stanstead, Safdie states; “These initiatives are a great way to bring new life to communities that have perhaps been in decline…”