Bernard Labadie is an internationally recognized expert on 17th and 18th century repertoire and founded Les Violons du Roy and La Chapelle de Québec in 1984 and 1985 respectively. He continues to direct their regular seasons in Quebec City and Montreal and throughout the Americas and Europe on tour.

As a leading ambassador for music in his native city of Quebec, Bernard Labadie was made an Officer of the Order of Canada in 2005 and a knight of Ordre national du Québec in 2006. In 2008, he received the Banff Centre’s National Arts Award for his contribution to the development of the arts in Canada, as well as an honorary doctorate from Laval University.

Born in Staffordshire, Lucy Crowe studied at the Royal Academy of Music. She has established herself as one of the leading lyric sopranos of her generation.

Her operatic roles include Adele (Die Fledermaus) and Servilia (La clemenza di Tito) for the Metropolitan Opera, New York; Eurydice (Gluck’s Orphée et Eurydice), Adina (L’Elisir d’amore), Susanna (Le nozze di Figaro), Gilda (Rigoletto) and Belinda (Dido and Aeneas) for the Royal Opera House, Covent Garden;  Sophie (Der Rosenkavalier) for the Deutsche Oper Berlin, the Bayerische Staatsoper, Munich and Covent Garden; Gilda for the Deutsche Oper Berlin; Pamina (Die Zauberflöte), Rosina (The Barber of Seville), Dona Isabel (The Indian Queen), Poppea (Agrippina) and Drusilla (The Coronation of Poppea) for English National Opera; Merab (Saul), Micaëla (Carmen), The Fairy Queen and the title role in The Cunning Little Vixen for Glyndebourne Festival Opera; and Dorinda (Orlando) in Lille, Paris and for the Opera de Dijon. She made her US Opera debut as Iole in Handel’s Hercules for the Chicago Lyric Opera and has since sung the role for the Canadian Opera Company.

After graduating in archaeology and anthropology from St John’s College, Cambridge, Iestyn Davies studied at the Royal Academy of Music, London.
His concert engagements have included performances at the Teatro alla Scala in Milan with Dudamel, the Concertgebouw and Tonhalle with Koopman, and the Barbican, Théâtre des Champs-Élysées, Lincoln Centre and at the BBC Proms in the Royal Albert Hall with orchestras that include the Bournemouth Symphony Orchestra, London Philharmonic, Britten Sinfonia, Concerto Köln, Concerto Copenhagen, Ensemble Matheus, Orchestra of the Age of Enlightenment, Academy of Ancient Music, and Scottish Chamber Orchestra. He recently made his debut, in recital, at Carnegie Hall, New York.

Allan Clayton has quickly established himself as one of the most exciting and sought after singers of his generation. A consummate actor and a deeply sensitive musician, he has already made a huge impact on the international operatic and concert scene.
Recent concert appearances include Bruckner’s Te Deum with the Gürzenich Orchestra and Markus Stenz, Handel’s Theodora with Les Violons du Roy and Bernard Labadie in Quebec, and the Britten Nocturne with the London Sinfonietta. He has sung the role of David in a concert performance of Act 3 of Wagner’s Die Meistersinger with Sir Mark Elder and the Hallé, Britten’s Spring Symphony with both the Philharmonia and the City of Birmingham Symphony Orchestra under Ed Gardner, Handel’s Belshazzar on tour through Europe with Les Arts Florissants and William Christie, Mendelssohn’s Elijah with the New York Philharmonic and Alan Gilbert, Verdi’s Otello (Cassio) with the London Symphony Orchestra and Sir Colin Davis, Haydn’s The Seasons with the Gabrieli Consort in Paris and London, Haydn’s Creation at the 2011 Bregenz Festival, Beethoven’s 9th Symphony both on tour with the Australian Chamber Orchestra and with the London Philharmonic Orchestra and Paul Daniel CBE, and Handel’s Messiah for the Handel & Haydn Society in Boston.

Italian bass-baritone Luca Pisaroni has established himself as one of the most charismatic and versatile singers performing today. His diverse operatic repertoire includes performances of Enrico VIII in Anna Bolena at Opernhaus Zürich and Wiener Staatsoper; Alidoro in La Cenerentola and Caliban in The Enchanted Island at the Met; Le nozze di Figaro at Opéra National de Paris, San Francisco Opera, Vienna State Opera, and Bayerische Staatsoper; Leporello in Don Giovanni at Glyndebourne, the Metropolitan Opera, the Salzburg Festival, and at Tanglewood with the Boston Symphony; Guglielmo in Così fan tutte at Glyndebourne and the Salzburg Festival; Enrico in Haydn’s L’Isola Disabitata at Vienna’s Musikverein; and Tiridate in Radamisto at Santa Fe Opera. 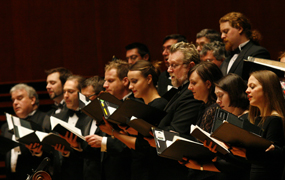 La Chapelle de Québec, founded by Bernard Labadie in 1985, is a nationally-based chamber choir of professional singers recruited mainly in Québec City, but also throughout Québec and Canada. It assembles for two or three concerts each season to join Les Violons du Roy in major works from the repertory for choir and orchestra, especially from the 18th century. Its performances of cantatas, oratorios and masses by Bach, Handel, Mozart and Haydn have been acclaimed throughout Canada and the United States, in particular thanks to many broadcasts by Radio-Canada, the CBC and NPR in the United States.

La Chapelle de Québec has performed regularly on tour with Les Violons du Roy, in particular in Handel’s Messiah and Bach’s St. Matthew Passion in Toronto, in an all-Vivaldi program in France and in Mozart’s Requiem in Toronto and the United States. In December 2009, La Chapelle de Québec and Les Violons du Roy, directed by Bernard Labadie, presented Handel’s Messiah and Bach’s Christmas Oratorio at Carnegie Hall in New York and the Walt Disney Concert Hall in Los Angeles. The choir and the orchestra returned to Carnegie Hall to present Bach’s St. John Passion in March 2012, and Purcell’s Dido and Aeneas in April 2015. The concerts received remarkably positive reviews, in particular from The New York Times and The Los Angeles Times.
La Chapelle de Québec won a Juno Award for its recording of Mozart’s Requiem, released by Dorian in 2002.