As the owner of two of Montreal’s most popular steakhouses, La Queue de Cheval Steakhouse & Angry Lobster Seafood Lounge on Rue de la Montagne, Peter Morentzos has never been one to stand pat.

When my family stopped by the “Q” recently for a fabulous dinner, it was our first return visit in year. As usual, this popular three-level facility was filled to capacity. While there were many familiar faces, including veteran server Jacky Toledano; there is a new man is in charge of the kitchen.

Morentzos introduced me to his new executive chef, Robert Goldberg, who first worked here from 2006 to 2008 as the head of the evening shift. Goldberg had recently been working as a corporate chef for Groupe Dynamite at its Montreal headquarters. With 800 employees, he had a lot of responsibility. Yet having enjoyed previous stints at places such as Le Pois Penché, Maison Boulud, Le Latini, Apollo, Wolfe Montcalm Catering and Café International, he was anxious to return to The “Q.”

“I missed being part of the fine dining experience,” Goldberg told me. “When Peter approached me to see if I would be interested, our timing could not have been better, as his executive chef was leaving and he offered me the job.”

Goldberg stepped in immediately, overseeing a team of about 15 chefs and spending as many as 15 hours at the restaurant on some days. It is a labour of love and a sign of deep respect for Morentzos. “I am responsible for the menu, creating new items, ordering, scheduling, quality control, cleanliness of the kitchen and most importantly – making sure that if every item is prepared absolutely perfectly,” he says. “We have a system here whereby first I check every dish. It then goes to either Peter, his son Chris or the manager on duty before the server takes it to the table. We have very high standards and by following that process we make sure it is perfect.” 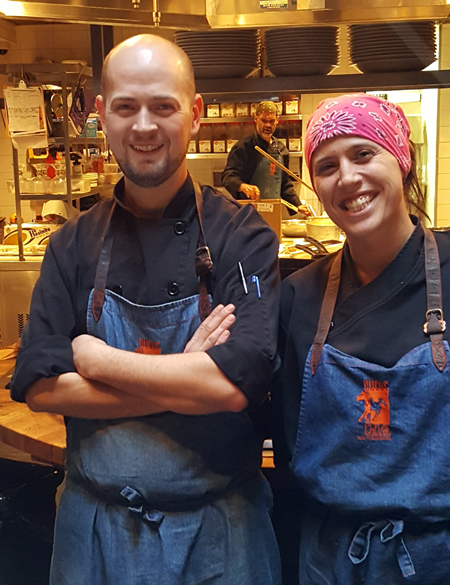 This 300 plus seat locale features Morentzos` signature open-exhibition kitchen, glass refrigerated meat lockers, an opulent winding staircase, and a massive round grill crowned by a dramatic 30 foot brass hood. The USDA prime beef is dry-aged in the restaurant’s meat lockers for 30 to 45 days. Downstairs you will find the Angry Lobster Seafood Lounge. The “Q” has three private dining rooms, able to handle 30 to 120 people, and a cocktail area for up to 150 guests. There is also a seasonal roof top terrace.

On the night we dined at The “Q” we were greeted by the team of Jacky Toledano and Mesbah. Jacky, who grew up in Côte Saint-Luc, has been with the Queue for 15 years.

The signature shellfish platter remains an absolute must for starters from the raw bar: lobster claws, lobster tails, Dungeness crab, shrimp and fresh bay scallops. I also had a Caesar Salad. For the main course we shared a 30 ounce bone-in rib-eye, cooked medium and sliced beautifully for us. Along with the sides of garlic mashed potatoes, oyster mushrooms, cauliflower and shrimp cocktail there was more than enough to share for the three of us. We also had some Chablis and glasses of ice wine. We saved just enough room for dessert and we can only rave about the white chocolate cheesecake, the crème brûlée, strawberry cheesecake and the death by chocolate.

Goldberg says he and Morentzos are presently studying the menu and considering some changes. The “Q” classics are headlined by lobster emerging, 2.5 to 4.5 pounds and de-shelled and other choices from drunken beef, rack of lamb chops, Mediterranean Sea bass, olive oil poached Big Eye tuna from Japan, and B.C. king salmon. The “Q steak cuts consist of favorites like the 32 ounce porterhouse for two (sliced), the petit mignon, the Kansas cut bone-in and the bone-in veal chop. There are about 20 side options.

“I really feel honoured to be working at a restaurant like this,” Goldberg says. “I take such pride in everything I do here. This is an expensive restaurant and that means I purchase expensive ingredients.”

The “Q” offers a popular theatre menu. From 5 pm to 7 pm diners headed to a hockey game or event at the Bell Centre can choose from a special menu with the assurance that they will be at their seat for the drop of the puck or the opening number.

Robert Goldberg, 33, has an interesting back-story. He was born in Quebec City and never met his dad. His mother previously lived in Israel, where she had two girls and a boy from her first marriage. “My mom was a struggling artist so I pretty well grew up on welfare,” he says. “She always put food on the table and I never missed out on anything, but those were tough times. It gives me a great appreciation for what I have today.”

When he was 12, Goldberg and his mom moved to Montreal and he attended FACE School. Four years later they relocated to Toronto to take care of his grandmother. “That is when I fell in love with cooking,” he said.

Goldberg enrolled at Central Technical High School, eventually taking cooking as a major. In 2001, he graduated from George Brown College in Culinary Management and immediately found employment in the Toronto restaurant industry. Nine years ago he moved back to Montreal and he has not looked back since.

Morentzos notes that many of his regular clients, particularly those from the Jewish community, are thrilled to see a chef named Goldberg at the helm – a man who still visits Israel from time to time to see his siblings.