Last Night at the Gayety is the perfect cure for our lingering winter. This musical from Montreal favourites Bowser & Blue is a laugh-out-loud comedy that had the audience breaking into spontaneous show-stopping applause throughout the performance. The storyline is about Montreal in the 1950s, when the city had a well-earned reputation as Sin City, when police and politicians for the most part were on the take and business in the nightclubs and brothels ran smoothly. One man, however, was beyond corruption, and Pacifique ‘Pax’ Plante was promoted from head of the morality squad to Chief of Police by the newly elected crime-busting mayor, Jean Drapeau. Plante and Drapeau were determined to close down the illicit clubs and bawdy houses.

George Bowser and Rick Blue have created several musicals for Centaur Theatre audiences, including their recent hit, Schwartz’s: The Musical.  As great as that show was, the guys have somehow managed to up their game with the songs, book and comedic timing for Last Night At The Gayety. This is a first-class musical that gets high marks for the songs, script, set, lighting, and most importantly, the acting and singing. It’s the whole package wrapped up and delivered with staccato timing and non-stop comedy by Centaur Artistic Director Roy Surette. Some of the zingers go by so quickly, you could easily go a second time. The cast and musicians are clearly having fun during the two-hour performance, and they’re still fresh and enthusiastic during the grand finale.

Lili St. Cyr was The Gayety’s star burlesque performer during the mid-fifties. She became the focus of Pax Plante’s efforts to clean up the city. By putting and end to her shows and closing The Gayety (now the Theatre du Nouveau Monde), Plante believed that the other clubs would fall like dominoes. While Plante was scheming against Lili, a young girl from Griffintown saw Lili and her show as a way out of her drab and futureless life in Griffintown. 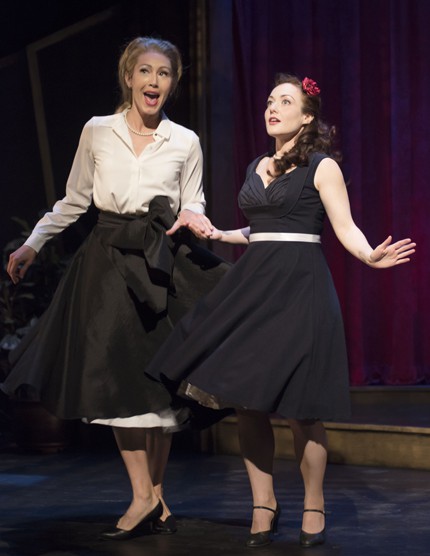 The stage is dominated by a The Gayety stage and red velvet curtain, with the trio of musicians just at the left side. The Gayety ‘stage’ also serves a Lili’s dressing room, and hotel room.

Roy Surette has engaged an experienced and talented cast, including; Holly Gauthier-Frankel as Molly from Griffintown, Michel Perron as Father D’Anjou, Daniel Brochu as Pax Plante, Frayne McCarthy as Tommy, and Tamara Brown in three roles (brothel Madame, Judge and Peek-A-Boo Girl). Jonah Carson plays the dim-witted cop Donald, and Davide Chiazze is well-cast as gangster-in-training Jimmy.  Brochu as Pax Plante is entirely believable; including his self-doubt that creeps in as he begins to realize that he is doing someone else’s dirty work. An archive photo of the Mayor Drapeau and the real Pax Plante shows how well Brochu has been cast.  Julia Juhas as Lili St. Cyr is outstanding, maintaining an aloof self-assurance throughout the show. She also looks terrific without her clothes on…

The show opens with the entire cast on stage singing This Was Before All That, a rousing song that sets the time frame of the performance with lyrics like; “…when buses were round and Decarie was flat!.” Frayne McCarthy plays Tommy, the owner of The Gayety and his character also serves ably as the narrator, tying the events of two decades together into a two-hour show. McCarthy has impressive credentials in theatre, and his steady performance complements his role as narrator.

The second act begins a tremendous all-cast performance of The Boys From Baron Byng. Many of that school’s boys would make the trip down St. Urbain for a glimpse of Lili St. Cyr, the first naked woman they ever saw. Bravo!

It all comes together to be another blockbuster hit for writing team of Bowser & Blue and The Centaur. Playwright David Fennario once told me; “A play should also be a good night out”. Last Night at the Gayety is a great night out at the theatre. For tickets please call the Centaur Box Office: 514-288-3161 or online: www.centaurtheatre.com