Rush Headlong into a New Ecosystem

OVO is teeming with life. Insects work, play, fight and look for love in a non-stop riot of energy and movement. Their home is filled with biodiversity, beauty, noisy action and moments of quiet emotion.

When a mysterious egg appears in their midst, the insects are awestruck and intensely curious about this iconic object that represents the enigma and cycles of their lives.

It’s love at first sight when a gawky, quirky insect arrives in this bustling community and a fabulous ladybug catches his eye – and the feeling is mutual.

OVO is overflowing with contrasts. The hidden, secret world at our feet is revealed as tender and torrid, noisy and quiet, peaceful and chaotic. And as the sun rises on a bright new day the vibrant cycle of insect life begins anew.

Set Design
The set elements: giant objects in a minuscule world
The overall setting of OVO is a stylized habitat that is home to the insects. At times it is a forest, at other times, a cave—or it could even be a house.

The show starts with a gigantic Egg on stage, obscuring much of the performance space from view. The mysterious object from the outside world is an inexplicable enigma in the eyes of the insects (and a nod to the monolith from the Kubrick film 2001). This timeless symbol of fertility and regeneration reappears in other forms later in the show, laid by the insects. 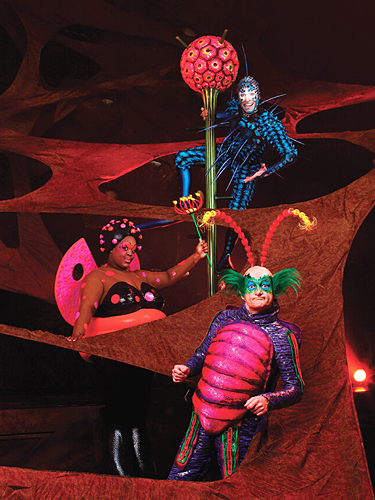 The Foreigner, The Ladybug and Master Flipo are some of the colourful characters living in this exciting ecosystem.

Giant props that evoke nature
An enormous 30-ft mechanical Flower appears on stage. The Flower blooms and becomes much more than an over scale prop, it’s a character in the show. Part sculpture, part puppet, part robot, it is seen from the insects’ point of view as a towering, inspiring feature of their environment.
Tall Poles rising high above the insect world represent the strands of flowers. The performing artists climb them and appear at various levels above the stage. Big or small, short or tall, it’s just a perspective matter after all…

Interesting Facts
• OVO is the 25th Cirque du Soleil live production created on the company’s 25th anniversary.
• OVO first premiered in Montreal in April 2009 and has visited more than 30 cities in 6 different countries
as a Big Top show before transforming in an arena show in 2016.
• OVO celebrated its 2000th show in February 2015 in Fukuoka, Japan.
• The crew of OVO is an international one, representing 12 nationalities: Belarus, Brazil, Canada, China, Denmark, France, Mongolia, Russia, Spain, Ukraine, United Kingdom and United States.