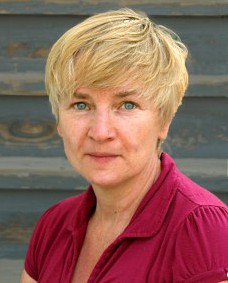 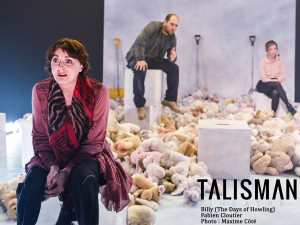 Lyne Paquette is a co-founder and Artistic Director of Talisman Theatre (www.talisman-theatre.com) a company dedicated to producing professional English-language premieres of contemporary Quebecois plays for non-francophone audiences.  Since its inception in 2005, Lyne has designed the sets of the company’s productions, including Province by Mathieu Gosselin, Billy (The days of Howling) by Fabien Cloutier, The Aeneid by Olivier Kemeid (winner of the 2014 Montreal English Theatre Award for Best Indie production – METAs), The Medea Effect by Suzie Bastien (META winner for Best Actress and Best Translation 2012), Coma unplugged by Pierre Michel Tremblay, Rock, Paper, Jackknife… by Marilyn Perreault, among others.  She has also designed for Montreal indie theatre companies and at College Jean de Brébeuf.

Theatre is Lyne’s second career, having graduated from McGill University in mechanical engineering. Since embarking on her artistic career, Lyne has sought to bridge the anglo-franco divide by creating works with Talisman Theatre that question, provoke and inspire the two solitudes of Montreal. Lyne is a graduate of The National Theatre School of Canada. 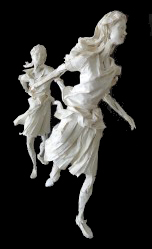 The Women’s Art Society of Montreal presents
Paper Sculptor: IVAN MARKOVIC
Speaking of His Life & Work
from 1:30 to 2:30 pm
at the McCord Museum, 690 Sherbrooke West
Nonmembers $10.

Ivan Markovic, a Montreal based sculptor, specializing in paper art, offers an intimate portrait of his life and work. Born in Montreal in 1970, Ivan Markovic holds a BFA from Concordia University and an MFA from Leeds University in England. After living in Madrid for a number of years, splitting time between his artistic production and teaching, Markovic returned to Montreal in 2010, where he now lives and works. His work has been featured in international art fairs and in solo exhibitions in Canada, the United States and Europe. His sculptures are included in many private collections. Ivan Markovic is represented by Galerie D’Este.
Email: imarkovic100@gmail.com

The Women’s Art Society of Montreal invites you to become a member of our group, where you can connect with like-minded people who enjoy the arts. We gather bimonthly on Tuesdays at the McCord Museum from 1:30 to 2:30 pm to listen to great talks. For more information visit: www.womensartsociety.com  or call 514-495-3701.