Unlike a Caribbean cruise where duty free shopping and a day at the beach are fittingly the main attractions, organized excursions are the main focus of a European cruise. Each port has so many sights, history and information available that we recommend guided tours. You’ll find the experience much more rewarding with a certified guide explaining the local history that goes back in time measured in centuries and millennia! There are many types of excursions available – so there’s an excellent chance that you’ll find something that suits your expectations. For example, the company offers eight different types of excursions to Athens, ranging from 3 ½ to 8 ½ hours. Similarly, there are nine options for Rome. The day-long itineraries almost always include lunch, and we were pleased with the ambiance of the restaurants and food quality. On some occasions with a small group, we had free time for lunch and shopping. This is how we discovered Osteria Al Forno Di Agnese, a terrific restaurant in the hilltop medieval town of Civita in the Tuscan countryside of Italy. 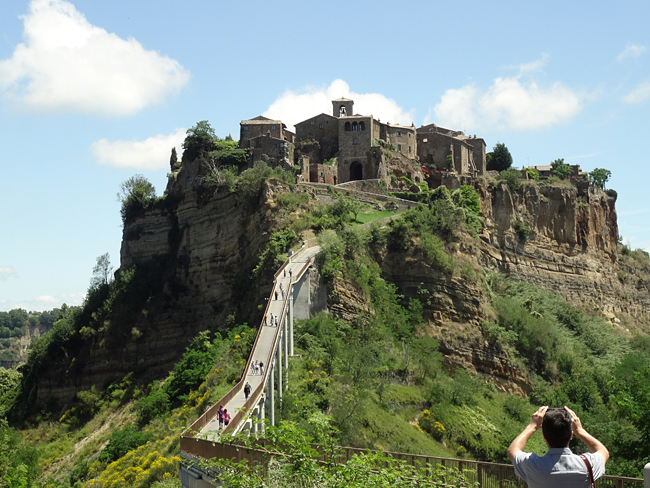 Perched atop an impressive rock outcrop, the views and stone buildings of Civita in Tuscany are truly unique and breathtaking

Depending on whether your cruise originates or departs from Venice or Barcelona, it is worthwhile considering a pre or post-cruise extension. I strongly recommend going a day or two before sailing so that you can enjoy exploring this unique city where even the buses are boats.  We stayed in Barcelona for a few days prior to another NCL Mediterranean cruise a few years ago, and it’s a fascinating city that I’d still like to re-visit. The same advice applies if you’re sailing from Barcelona.

After our first day at sea, we sailed up a fjord to Kotor in Montenegro, one of the ‘new’ countries that has emerged from the former Yugoslavia. This is small medieval city, surrounded by mountains and it was quickly evident to us why Kotor is a favourite amongst the ship’s officers, crew and our fellow guests.

Another medieval city, the inner walled city was used as a redoubt during the civil war in the 1990s, defended by 163 men and teenagers. Our guide’s mother worked in a 5-Star hotel that provided food and shelter to the defenders. There are tours that take you through the city and the beautiful countryside.

The port city of Piraeus is a solid 90 minute drive from Athens and the drive is well-worth the experience of visiting the Acropolis and the Parthenon, The Temple of Athena and other monuments built to the Greek gods. It’s an awe-inspiring experience to stand on the same mountaintop as the ancient Greeks whose philosophy and formed the basis of our modern democracies. There are ten tour options to Athens, with differing fitness levels. Climbing the 75 steps and hillside to the Acropolis is a level 2 or 3 that requires two hours of walking; but worth every step. Our tour also included a coastal tour to the Temple of Poseidon with magnificent views of the cliffs and harbour below.

Tourism is essentially the only business on Mykonos, which is a haven to the rich and famous. Essentially a desert island, the main purpose of visiting Mykonos is to enjoy a day at the beach – and enjoy it we did!

In addition to touring this historic former city state, there are tours to Pompeii (one of the world’s most magnificent archaeological sites), Sorrento on the Amalfi coast, and the island of Capri – home of the Blue Grotto. Some tours have combinations of two or all three destinations.

What can you say about Rome and the grandeur of the Roman Empire, The Vatican, the Trevi Fountain, the Coliseum, the Sistine Chapel, St. Peter’s Basilica, and so many historically significant sights? If this is your first time cruising to Rome’s port of Civitavecchia, then the only question is which of the many excursions you’ll take. We had both been to Rome before, and elected to take a tour of Tuscany called Off The Beaten Path, to visit two medieval towns; Tuscania and Civita di Bagnoregio. Once one town, Civita and Bagnoregio were separated as a result of a massive earthquake in 1689. The earth literally collapsed, creating a deep valley and leaving part of the town isolated and sitting at the top of a butte-like rock formation. Joined by a footbridge, it’s simply spectacular. 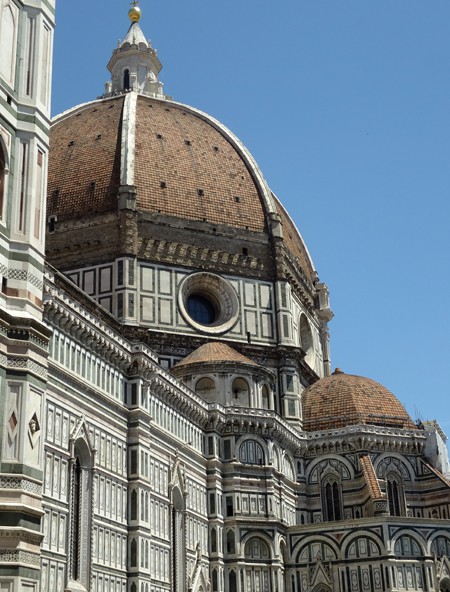 You’ll find Michelangelo’s David and the Cathedral (Duomo) of Santa Maria del Fiore; its immense dome an engineering marvel. A few blocks away you’ll find the Basilica of Santa Croce, the burial site of Michelangelo, Rossini, Machiavelli, and Galileo – all citizens of Florence. Walk down to the Arno River to the famous 16th century Ponte Vecchio. In addition to the incredible historical sites, Florence is also famous as a fashion and shopping centre. Down the road you can travel to Pisa and its famous leaning tower, now re-opened for tourists. There are also wine-tasting excursions in the lush Tuscan countryside.

Located in the French Riviera, there are tours to nearby Monte Carlo, St. Tropez, Aix en Provence, a 7-hour wine tasting tour in Provence, and the seaside resort of Sanary-sur-Mer on the Cote D’Azur.

There are so many diverse tours and combinations; you could repeat the Grand Mediterranean itinerary on the Norwegian Spirit without duplicating an excursion. History comes alive, the cuisine is terrific, and you can give your credit card a serious workout in the stores.

For more information about these excursions, this 12-day cruise or any other European itinerary offered by Norwegian Cruise Line, please contact your travel agent or visit: www.ncl.com or call 1-866-234-7350.