We interrupt our traditional Travel column for a look at some suggested dining establishments in Montreal.  New to the scene is 155 Fahrenheit, located at 42 McGill Street in Old Montreal and the brainchild of noted restaurateurs Raphael Roussel and Louie Mercuri.

I met Louis when P.F. Chang’s Asian cuisine came to Montreal four years ago. He was an original operating partner. The St. Leonard native connected with his friend Raphael last winter and decided that the time was perfect to embark upon a new challenge together. Four months later 155 Fahrenheit was born. There are 45 seats here and 15 more on the seasonal summer terrace. They grow their own spices in special planters in the front and specialize in burgers and bubbly – matching five different versions of fabulous burgers with different bottles of champagne and prosecco.

Where did the name come from? “It refers to the temperature in which we cook our meats at,” said Raphael. “The quality of our meat is exceptional. It does not require to be overcooked.” 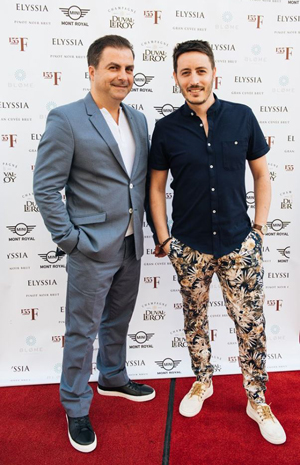 There are other choices, such as a lobster sandwich with Granny Smith, Dijon, and pancetta; Cornish hen, with beer, citrus, plums and Moroccan olives; Oka gnocchi, with lobster bisque, oyster mushrooms and Cognac 18; market fish, with smoked paprika, gem potatoes, jalapenos and xeres 21. The selections of sides are market vegetables, Québec roots slaw, Mom’s pickles and curly French fries with herbs. In the evening only, you can also have oysters, scallops and sea urchins.

When I dropped by for a tasting I sampled the lobster salad and Brussel sprouts to start with. Let me first say that I had never been a fan of the latter before, but these taste like candy. The lobster salad is also superb. Also on my sampling list was the gnocchi and half of a beef classic and half of a Bison burger. They were served on soft and fresh brioche buns, with a dash of pineapple juice and melted in my mouth. I also got a taste of their homemade ketchup speciality. Now this does not look anything like the red paste you squeeze out of a container. It is a virtual side dish and delicious as can be. “My mother in-law makes it for us and only she knows the recipe,” Louie says.

Louie has been in the business for 25 years now. It all began when he invested in a Nickels Deli franchise. “It was a good school for me,” he says. “But I really wanted to pursue my passion for fine dining.”

With that in mind Louie opened an Italian restaurant on the Plateau that he called Giorno e Sera (which means Day and Night). Five years later he went corporate and was recruited by the Les 3 Brasseurs group to be their director of operations. That spawned similar opportunities with St. Hubert BBQ and Jack Astors, before P.F. Chang’s came calling. He became the operating partner for the Decarie location. When he left after two years at the helm, his good friend Emile Haykal took over his duties.  P.F. Chang’s, which also has a location at Carrefour Laval, was purchased last summer by Group Sportscene – the owners of La Cage Aux Sports (now known as La Cage Brasserie Sportive). They have added items such as lobster on their menu and with men like Haykal on board they seem to be on a good path.

These days Louie is also a part-owner in Carlos and Pepes Mexican Restaurant downtown. Raphael actually hails from Nice, France. He also had a solid background in the culinary business, with previous ties to the Buonanotte group, Bice, Newtown, famous chef Chuck Hughes’ Le Bremner and Lucille’s Oyster Dive. “I actually have a degree in communications and psychology, with a minor in theatre arts,” he says. “Not the typical background of a restaurateur.”

At 155 Fahrenheit the white walls are quickly becoming the home of different pieces from young artists, on display and available for sale. On the day I visited for lunch, most of the tables were taken, showing that word of mouth is already spreading. The grand opening took place on May 19, attracting a standing room only crowd.