With so many amazing acts coming to Just For Laughs, it’s impossible to see them all… but not anymore thanks to the Mega Stars of Comedy Gala! This one-of-a-kind Gala features world-class headliners: Danny Bhoy, Lewis Black, JB Smoove, Greg Proops, Gerry Dee, Iliza Shlesinger, Dave Hughes and more! 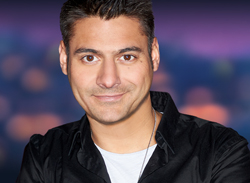 •  In a relatively short period of time, Danny has established himself as one of the biggest-selling comedians in Canada, Australia and New Zealand as well as his home country of Scotland. In November 2014, he did his first tour of the US with his critically acclaimed show Dear Epson, and in 2016, continued building on his success with his tour ‘Please Untick This Box’ with sold out shows in Australia and New Zealand.
•  The Gemini nominated performer has made annual appearances at all the major festivals around the world including regular appearances at the Montreal Just For Laughs Festival and has performed three times on Live At The Apollo, which he was invited to host in 2015.
• In addition to his live performances, Danny’s first two DVDs Live at The Opera House and Live at the Athenaeum were released only in Australia and New Zealand, where they enjoyed huge success. In early 2012, he recorded his first worldwide DVD in his home town of Edinburgh, Live At The Festival Theatre.
• He has also been featured on the The Late Show with David Letterman and has recorded a one-hour Comedy Central special entitled Subject To Change. 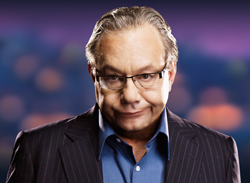 • He’s known as the king of the rant he uses. His trademark style of comedic yelling and animated finger-pointing to skewer anything and anyone that gets under his skin.
• Lewis has received critical acclaim and performed for audiences throughout Europe, New Zealand, Canada and the United States. In 2012, he performed eight sell-out shows at Richard Rodgers Theatre on Broadway.
• In 2006, Lewis had a break-out year as an actor, co-starring with Robin Williams in Barry Levinson’s “Man of the Year” (Universal Pictures). He also appeared as “the fake dean of a fake college” in Steve Pink’s “Accepted” (Universal Pictures) and as the harried airport manager in Paul Feig’s “Unaccompanied Minors” (Warner Bros.). He lent his voice to Jimmy in Bob Saget’s parody “Farce of the Penguins” (Thinkfilm).
• In 2015, Lewis notably voiced the character “Anger” in the Academy Award winning film from Pixar, “Inside Out.”
• He’s appeared on “Larry King Live,” “Piers Morgan Tonight,” “Late Night with Jimmy Fallon,” “The Late Show with David Letterman,” “Late Night with Conan O’ Brian” and “The Late Late Show with Craig Ferguson.” Lewis has also had numerous appearances on CNN and MSNBC and has occasionally done the weather with Al Roker.
• Lewis has written three best-selling books: “Nothing’s Sacred” (Simon and Schuster, 2005), “Me of Little Faith” (Riverhead Books, 2008) and “I’m Dreaming of a Black Christmas” (Riverhead Books, 2010). All garnered critical praise as well commercial success and spent numerous weeks on the New York Times best sellers list.
• Lewis has penned more than 40 plays, many of which have been produced around the country. “The Deal,” a dark comedy about business, was made into a short film in 1998 and picked up by the Sundance Channel. In 2011, his play “One Slight Hitch” was produced at the Williamstown Theatre Festival and then again in 2012 at both the ACT Theatre in Seattle and The George Street Theatre in New Brunswick. 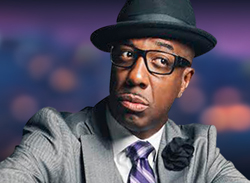 He’s a real character: JB’s breakout role as Leon on “Curb Your Enthusiasm” has firmly planted him as one of the best comedic actors today.
He’s got writing chops: After a season as a cast member on the sketch comedy program “Cedric the Entertainer Presents,” JB landed a writing position on NBC’s “Saturday Night Live.” He later was a recipient of the 2007 Writers Guild award for “Best Comedy/Variety Series” for his work on the show.
He’s a TV star: Recently, he was seen as host of NBC’s “Last Comic Standing,” He co-starred in the CBS comedy “The Millers” and is launching season three of his show “Four Courses with JB Smoove” on the MSG Network.
He’s got pipes: JB’s unique comedic voice has also been put to good use in animation where he’s done voiceover for roles in Ice Age 4, The Smurfs 2 and American Dad.
He’s a good dude: JB is a proud supporter of the Mt. Vernon Boys and Girls Club.

• Greg has lent his voice to Hell and Back, Star Wars the Phantom Menace, The Nightmare Before Christmas  and he really was Bob the Builder
• He is best known for his unpredictable appearances on Whose Line is it Anyway? Both US and UK. Starting it’s 4th season on the CW
• He has a new book, The Smartest Book in The World, based on his hit podcast, The Smartest Man in The World
• Greg has a new album out called In the Ball Park
• His nicknames include “The Proopdog”, “Proople Rain”, “Professor Proops”

• He has released three stand-up comedy DVDs
• Gerry released a book titled, Teaching: It’s Harder Than It Looks
• He is currently developing a new comedy for CBC titled, My Scottish Family, which is loosely based on his own life and that of his Scottish relatives.
• Gerry created, writes, and stars in the popular CBC series Mr. D 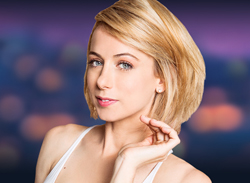 • Originally from Dallas, Iliza moved to Los Angeles after graduating from Emerson College
• She is the only female and youngest comedian to hold the title of NBC’S Last Comic Standing
• In 2013 her debut one hour comedy special, War Paint reached #1 on the iTunes charts and was named one of the “Top Ten Albums of 2013” on iTunes. It is currently available on Netflix
• Her follow up Netflix Original Comedy Special Freezing Hot premiered to rave reviews in January 2015
• She was the host of CBS’s syndicated comedy dating show Excused, in which she filmed 230 episodes
• Iliza’s TV credits include multiple appearances on NBC’s Late Night with Jimmy Fallon, TBS’ Deal With It, Comedy Central Presents, as well as Late Night with Jimmy Fallon, Comedy Central’s Live at Gotham, E! Network’s Chelsea Lately and The Soup, NBC’s Last Call with Carson Daily, TBS’ Who Gets the Last Laugh?, and Showtime’s Pauly Shore and Friends and Bridging the Gap Comedy Festival
• She is featured in the comedy documentary I Am Comic
• Iliza loves the troops and was honored to participate in The Chairman of the Joint Chiefs of Staff’s personal USO Tour throughout the Middle East and Europe
• She’s the host of Seperation Anxiety, a new relationship-based game show on TBS

• “Hughesy” has been touring Australia with his brand new stand up show Sweet; while continuing his national drive radio show
• He hosted Australia’s Got Talent– the most successful entertainment format in the world today
• He re-defined the way that hundreds of thousands of Australian’s saw the news as a 5 year co-host of Network Ten’s The Project, a nightly panel show and one of Australian television’s most daring experiments
• His stand-up comedy special Hughes The Boss just aired on Channel 9