Founded on 2011, The Cote St-Luc Dramatic Society won the Montreal English Theatre Award (META) for Outstanding Community Theatre Production in 2015 for the company’s production of the musical, Hairspray. Since its founding, the community theatre company has already staged ten musical productions; including Grease, Catch Me If You Can and Fiddler On The Roof.

Cote St-Luc City Councillor Mitchell Brownstein is practicing attorney by day, and a talented actor and theatre producer by night. This is in addition to managing large municipal portfolios such Public Works and his current responsibility for Parks and Recreation in Cote St-Luc. “Last spring’s production of Hairspray was a tremendous success, and after winning the META for Outstanding Community Theatre Production, we’re delighted to be able to remount the show at The Centaur from January 21 – 24.” 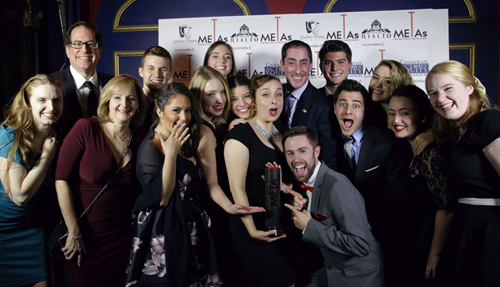 If it’s been a while since you’ve seen the movie or the musical; here’s a refresher. This award-winning musical tackles the issue of racial segregation in the United States in the 1960s. The show follows the story of the plucky and plump Tracy Turnblad as she pursues her dream of becoming one of the regular dancers on The Corny Collins Show (loosely patterned after American Bandstand). The obstacles to Tracy’s dreams help to open her eyes to the struggles of the black community, and her fight for herself turns into a crusade against segregation in 1960s America.

“The lessons of tolerance and understanding are applicable today. Hairspray is not only great entertainment with wonderful music and dancing, but it promotes ideas of justice and anti-discrimination that the City of Côte Saint-Luc holds dear,” said Brownstein, who is also the show’s producer and is one of the actors. “I have the role of Wilbur, Tracy’s supportive father.” Wilbur owns the corner joke & magic store; and his character proves to be much more robust as the show evolves.

It’s a large production, with a 32 person cast directed by Anisa Cameron. The cast includes members of the Montreal Gospel Choir and the Jireh Choir. The eight-piece band is led by David Therriault. Mitchell adds; “Everyone gets paid except the actors. Part of our mandate is to provide experience and paid employment for those people behind the scenes who want to make a living in theatre.”

Mitchell Brownstein and the 32 member cast of Hairspray will take the Centaur Theatre stage in Old Montreal from January 21 – 24. For tickets please call the Centaur Box Office at 514-288-3161 or visit: www.centaurtheatre.com Enjoy!