But lest we categorize Bruneau’s expressive output as Art Brut, it must be noted that she has formal training, having studied at l’Ecole des Beaux-Arts de Montréal and at the Museum of Fine Arts School of Arts. Born in 1929, she spent time in Europe, studying dance in Paris, and for a while led a somewhat peripatetic lifestyle, travelling to North Africa, South-East Asia and South America. The impressions, colours and textures of far-away lands found their way into her canvases, but she drew equal inspiration closer to home, in the vast expanse of the Gaspé Peninsula, channelling its overwhelming natural beauty into her creative process.

A painters’ painter, Bruneau tackles her metier with the exuberance of a child and the astuteness of a sage. She draws from a range of symbols, her own personal assortment of visual notations that take the form of fish, birds, boats, but also faces and masks, thus oscillating between reality and fantasy, the inner and outer world, and all the time keeping true to her visual lexicon.

It would be facile to compare her works to those of Picasso, Antonio Saura or Mimmo Paladino. What all these artists have in common, more than their particular imagery and palette, is a powerful energy that drives their creativity. Free and audacious, these painters consistently, persistently labour on the side of artistic expression, all else be damned. Kittie Bruneau tends towards the large format in her paintings; that kind of energy must be difficult to hold in check, and it is to her enormous credit that she does so with the same ease as when she releases it.

Once she embarks on a painting, Bruneau in effect begins a kind of dance. She literally steps into her work; standing on, walking over the canvas spread on the floor, creating, sowing the images as she moves across it. There is no rush, the steps are deliberate, the gestures unencumbered yet controlled, the colours leading the way in this dazzling visual pageant. 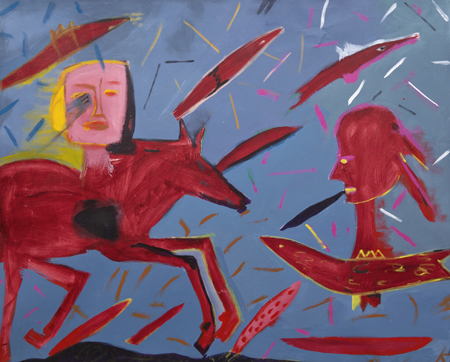 The works in this exhibition have been handpicked by Andrew Lui, the owner of Han Art gallery and a formidable painter in his own right. It must have been a daunting task, for the selection spans a period of almost 40 years of Bruneau’s prolific career. Inspired by the Dutch artist, Lucebert, known as the poet of the CoBrA avant-garde movement active in Europe between 1948 and 1951, he must have seen echoes of that exciting style in Bruneau’s work. Based on spontaneity and experimentation, it took inspiration from children’s drawings, as well as the stylized, primitive forms found in the works of such artists as Joan Mirò and Paul Klee.

Bruneau’s tableaux, influences notwithstanding, are staunchly hers, and at one point comparisons begin to wear thin. Her art is hers alone, her compositions and shapes speak of her inner vision and creative compulsion, and ultimately tell the tale of her personal artistic experimentation. Each could be seen as a chapter, an entry in a continuing visual diary.

Dubuffet also said that art must make you laugh a little and make you a little afraid, and Bruneau’s paintings do just that. The figure in Les embroches, with its two Janus-like heads and splayed or missing limbs is both scary and hilarious, and the shaggy dog with a sharp snout staring out of the canvas adds to the unsettling sensation. The bright colours are in perfect balance with the powerful imagery, a Kittie Bruneau hallmark.

The energy imbuing Hunguedo I delivers a virtual blow to the viewer. The gestures are almost frenetic yet controlled; the entire composition simply exploding, forcing the eye to dance from shape to shape, tripping on the vibrating colours, getting tangled in this dizzying plastic landscape. There is a sense of overlap, as if the background was separating from the mask-like shapes that occupy the canvas. They emerge and recede; there is relentless, constant movement entrapped within this painting.

From time to time Bruneau becomes a storyteller, her canvas a page on which to paint a tale, as is the case with Le grand pianiste that at first glance resembles a child’s drawing. Birds are cascading from the sky; others lift off from a shadowy corner, while a long-armed pianist plays with wild abandon, head thrown back in ecstasy. A giant shape sits atop the piano, composed of a tangle of colourful gestures, tiny ears pointing to a feline. The whole composition undulates, the colours and shapes in perfect unison, the narrative but a link between the many layers.

Picasso once avowed: “It took me four years to paint like Raphael, but a lifetime to paint like a child”; ditto for Kittie Bruneau.

Dorota Kozinska is a writer, art critic, and editor based in Montreal. Her art reviews and articles have been published extensively in Vie des Arts, Parcours informateur des arts, and The Gazette, as well as broadcast internationally on CBC Radio. She is the author of numerous artists’ catalogues and an independent curator.