It’s my second morning aboard the Europa 2 and we’re gliding towards the island of Thassos surrounded by the crystal blue waters of the North Aegean Sea. Unlike the south of Greece, this stretch of northern coastline is an under-the-radar destination; we’ve seen no other cruise ships since we left Thessaloniki a few days earlier. Still wrapped in my bathrobe, I lounge on my terrace sipping an espresso and watch as a fisherman in a weathered wooden boat hauls in his nets. 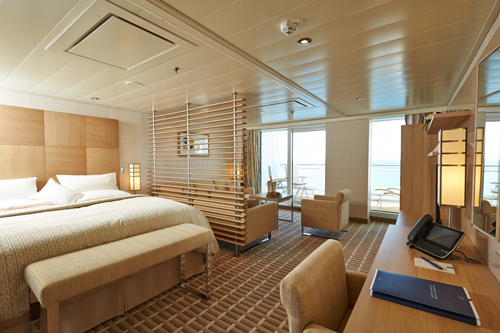 Since its maiden voyage in May 2013, the Europa 2 has been garnering awards. And the accolades show no signs of slowing. For 2016, the venerable Berlitz Cruising & Cruise Ships Guide awarded Hapag-Lloyd Cruises’ luxury ships, the Europa and Europa 2, the distinction of being the only 5-stars-plus cruise ships worldwide. Out of 270 cruise ships assessed on criteria such as fittings, accommodation, food quality, service, crew, entertainment and overall cruise experience, the Europa 2 achieved the highest score among all ships.

Yet beyond the numbers, my impression is that there’s something intangible, something beyond the polish of the vessel itself and the precision of its German engineering that defines the uniqueness of cruising on the Europa 2. Over the next few days, I set out to define what it is.

To begin, with just 251 suites and capacity for 516 passengers, the Europa 2 feels more like a yacht or a luxury villa than a cruise ship. The lobby channels understated elegance in polished chrome and streamlined furnishings, featuring a colour palette inspired by autumn forests and spring meadows. Glass elevators transport guests between the seven passenger decks. No matter where you are within the spacious public areas, there are views of sea and sky. Much of the wow-factor also comes from the artwork, almost 900 pieces of art created by luminaries such as Damien Hirst.

Above, on the teak-paneled rooftop pool deck, the sapphire blue swimming pool is so large you can do laps beneath its soaring (and fully retractable) glass dome. Infused with light, it is glamorous enough to serve as the backdrop for evening cocktail parties. Bali beds offer serene lounging zones both indoors and out.

Another turn around the ship takes you to the 1,000-m2 spa, a waterworld featuring four different saunas, whirlpool, Kneipp pool, outdoor deck and bracing ice fountain that wouldn’t look out of place in Baden Baden. It’s given an extra dose of authenticity as certain spa zones are clothing optional in the true German thermal bath tradition. The nearby fitness studio is decked out with the latest in Technogym equipment. And if you feel like golfing St. Andrews in Scotland, two golf simulators offer 15 golf courses to explore. PGA pros can even help you hone your swing.

Yet, it’s within my stateroom that I find my own private paradise. The Europa 2 is home exclusively to outside suites, each with a veranda large enough to host friends over for cocktails. The suites offer between 35-m2 and 114-m2 of space, the best ratio in the industry. Within my Veranda Suite there’s a walk-in wardrobe, a deep soaking tub, a living area with chaise sofa and a desk decked out with a tablet computer. Adding to the spaciousness is built-in furniture so ingenious one cabinet holds a Nespresso machine, a set of porcelain dishes, cutlery and a mini-bar at eye level so there’s no need for stooping. The craftsmanship is so fine, I find myself opening drawers just to hear the satisfying swoosh as they glide in and out. Much of the sense of harmony is felt rather than seen. Extra insulation between cabins creates a silence broken only by the soothing sound of the waves. All air is 100% fresh, pumped in from outdoors. With 24-hour room service and a slideshow of scenery beyond the patio doors, it’s very tempting to stay put. 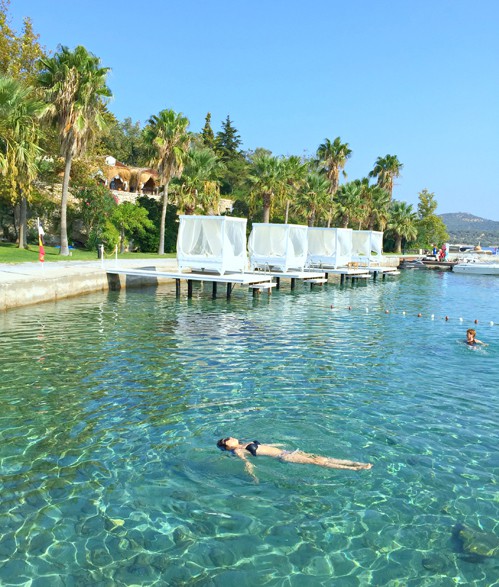 While it might be tempting to dine in your stateroom, cuisine aboard the Europa 2 is a real highlight. The food—from sushi at Sakura to beef tartare prepared tableside—is elegant, contemporary and flawlessly executed. Culinary offerings include the largest gin selection at sea, caviar theme nights, six bars (including Sansibar modeled on Germany’s original beach bar), a poolside waffle station and seven themed restaurants, including al fresco dining at the Yacht Club, Mediterranean cuisine at Serenissima and international fare at Weltmeere, the largest restaurant. All meals are included, although drinks carry a surcharge. Guests can also hone their skills at the Miele-equipped Culinary School under the guidance of the Executive Chef.

The Europa 2 does luxury dining at its laid-back best. Flexible mealtimes and no fixed seat allocation means you have the freedom to dine where and when you like. Dress is smart casual, and although men generally wear jackets to dinner, you don’t need to pack your tuxedo and ball gowns unless you want to. Nightly entertainment is top notch and includes a jazz bar, comedy shows and acrobatic productions in a state-of-the-art theatre. 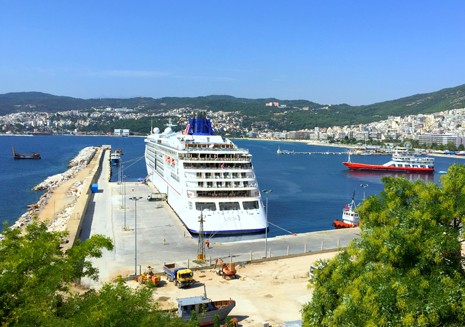 In addition to the relaxed onboard experience, the Europa 2 is unique in that they don’t repeat standard itineraries. Instead, they offer an every-evolving menu in the Eastern and Western Mediterranean, the Caribbean, Africa, the Middle East and more. The small size of the ship means you can explore destinations in ways the mega ships can’t. Our cruise included Thassos, where even at the end of the summer season, we were just the second ship to visit that year. We explored tiny mountaintop villages then lounged at stylish La Scala Beach Bar and swam in clear Aegean waters. Other memorable shore excursions included visiting the Phillipi archeological site in Kavala, Greece and a morning spent at the exclusive Oliviera Resort on Kalem Island, Turkey. If you can dream it, the Europa 2’s private travel concierge service will try to deliver it.

By the time we sailed through the Bosphorus to timeless Istanbul, I had gained a real appreciation of German seafaring engineering. It seems that the ultimate in luxury cruising is less about pomp and more about subtleties, understated elegance and personal choice. 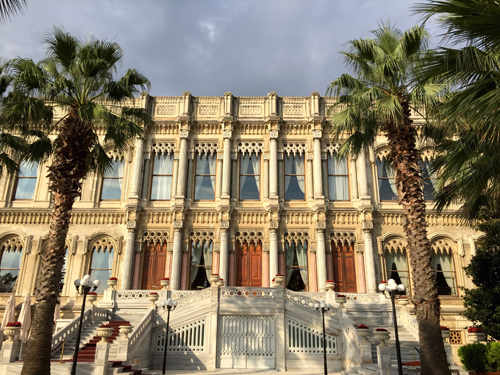 Istanbul: Pre or post-cruise, the Ciragan Palace Kempinski Istanbul offers special appeal for luxury travellers. Located on the European shores of the Bosphorus overlooking the ancient city, it features deluxe rooms with waterfront views, a fully-equipped fitness center, expansive gardens with an outdoor pool overlooking the Bosphorus and the Sanitas spa. The hotel’s Tuğra Restaurant within the original Çırağan Palace hosts a classic Ottoman fine-dining experience widely considered one of Istanbul’s best. www.kempinski.com

Hapag-Lloyd Cruises: A wide range of cruse destinations are available in 2016/2017 from the Arabian Peninsula, Eastern Mediterranean, Western Mediterranean, Northern Europe, North & Central America, Oceania and Asia. For more information and booking, see your travel agent or call 1-877-445-7447 or 1-800-334-2724. www.hl-cruises.com