Montreal has a well-deserved reputation as a centre of cultural activity; with two symphony orchestras, the world’s largest jazz festival, Canada’s most successful Art Museum, and North America’s most important comedy festival – Just For Laughs and Juste Pour Rire. The name of the latter festival’s mascot is Victor, and many Montrealers may not know that the first posters designed to Just For Laughs and it’s mascot in 1983 were designed by none other than Vittorio Fiorucci. In what I learned was typical Vittorio’s quirky sense of artistic humour – he named the cartoon character mascot after himself.

The exhibition at The McCord is aptly titled: Montreal Through The Eyes Of Vittorio; 50 Years Of City Life And Graphic Design. It was Vittorio, a downtown boulevardier and immensely talented artist and photographer who produced posters to promote L’Opéra de Montréal, Just For Laughs, Orchestre Symphonique de Montréal, and businesses such as National Bank and Le Château clothing stores. Self-taught, he also designed album covers for major Quebec artists like Pierre Létourneau and Offenbach. His posters are an enduring reflection of culture and business in Montreal for fifty years.

Vittorio immigrated to Montreal from Italy in 1951, and began working as an artist, specializing in posters used to promote the arts and businesses. By 1960 he was an established artist; and by 1980 he was recognized as one of the best poster artists in the world. 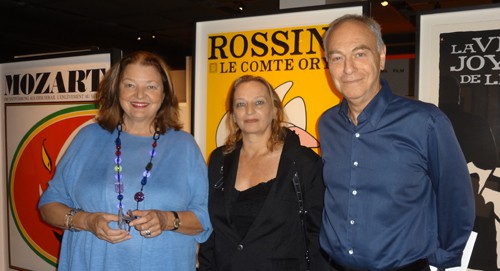 The McCord exhibition, curated by Marc Choko is outstanding; and it is indeed a reflection of Montreal through the eyes of this multi-dimensional artist. At the same time, using film and black and white photography, the exhibition tells the story of a larger-than-life character. Vittorio loved women, music, restaurants, cafes, and cars. Also a talented photographer, TIME Magazine used his photo of actress Genevieve Bujold for their cover. This uniquely Montreal exhibition will remind many visitors to the exhibition of their special Montreal moments.

The exhibition consists of almost 125 posters, photographs, illustrations, magazines, toys and comics, most of them from the collection of Judith Adams, Vittorio’s partner. Screenings, videos and interview excerpt are also part of the presentation.

For his friend Michael Flomen, Fiorucci’s legacy moves beyond the boundaries of paper and paint: “Vittorio was my mentor and he taught me a lot about artistic technique and that kind of thing…but the most important thing he taught me was how to be a friend. He was loyal and giving and when he was your friend, he was there for you 24/7. I miss that. I miss my friend.”

The exhibition continues until April 10, 2016. McCord Museum has published a beautifully illustrated book on the life and career of the artist, Through the Eyes of Vittorio, written by Marc H. Choko, Curator of the exhibition. The book is available in French and English.

The McCord Museum is located across from McGill University at 690 Sherbrooke St. West. For information please call: 514-398-7100 or www.mccord-museum.qc.ca