A non-competitive fun run where individuals, families and groups walk or run one to ten kilometers to raise funds for cancer research. The course will be a 2.5 km route from one end of the port to the other, along the promenade as well as along the piers, then back to the start point. Participants will enjoy stunning views of Old Montreal and the St. Lawrence River.

Location:
The start location of the Montreal Terry Fox Run has been moved to a NEW STARTING POINT AT THE OLD PORT OF MONTREAL.
Start is at the locks, facing 357 de la Commune West, corner McGill Street. 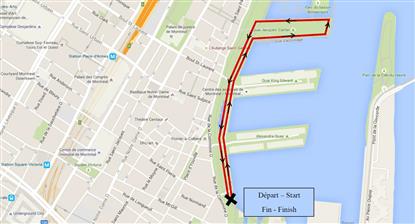 Runs are held in numerous locations, please visit Find_A_Runsite  to locate a site near you.

History of the Terry Fox Run

Terry Fox was diagnosed with osteogenic sarcoma (bone cancer) in his right leg in 1977 and had his leg amputated 15 cm (six inches) above the knee. While in hospital, Terry was so overcome by the suffering of other cancer patients that he decided to run across Canada to raise money for cancer research. He called his journey the Marathon of Hope.

Terry’s Marathon of Hope took place in 1980 with the simple objective of informing Canadians of the importance of finding a cure for cancer. With fierce determination, he ran an average of 42 kilometres (26 miles) every day for 143 days. Terry was forced to end his run on September 1, 1980 when the cancer spread to his lungs.

On May 26, 1988, The Terry Fox Run became a Trust, independent from the Canadian Cancer Society, and received tax-exempt charitable registration as a public foundation. In addition to our signature and long-standing National Terry Fox Run Day in September of each year, The Terry Fox Foundation is proud to include in its events portfolio The National School Run Day.

To date, over $650 million has been raised worldwide for cancer research in Terry’s name.

After being diagnosed with bone cancer, Terry Fox decided to run across Canada in 1980 to raise funds for cancer research and increase awareness about the disease itself. This year, Montreal will host its annual Terry Fox Run! On Sunday September 20th, come join us at the Old Port of Montreal, at the locks, (facing 357 de la Commune West, corner McGill Street) to help outrun cancer!

On the day of the Run, registration will begin at 8:30 AM. The run will begin at 9:30 AM. The course will be a 2.5 km lap from one end of the port, along the promenade as well as along the piers, bringing participants back to the starting point. The course can be repeated to run an optional 5, 7.5, or 10 km. Participants will enjoy stunning views of Old Montreal and the St. Lawrence River.

This event is not open to bikes or rollerblades. There is no cost to participate or minimum donation required, although you may fundraise before the event with your family and friends.

“Even if I don’t finish, we need others to continue. It’s got to keep going without me.” Terry Fox