How many bands grow even more iconic with each passing year? It’s a short list, and on it is Journey. Through all its phases and eras, twists and turns the band sees its music become more popular as the years go on. The roadie who suggested the band name “Journey” truly had a vision.

The band has reached heights that likely no other artist can hit these days, with its Greatest Hits album hitting 15-million-plus in sales. It’s not luck; it’s persistent, hard work over the years. When TV shows like Glee and The Sopranos made the song “Don’t Stop Believin'” a sensation decades after its release, it’s because that music endured. Since the group’s formation in 1973, the band has earned 19 Top 40 singles and 25 Gold and Platinum albums.

“Don’t Stop Believin’,” Schon said, “has become this national anthem, world anthem. It’s really wild. If somebody plays it, no matter where, everybody sings it.”

As their San Francisco Bay Area cohorts The Grateful Dead once sang, what a long strange trip it’s been.

With survivors of Santana and Frumious Bandersnatch in the fold, Journey released three albums starting in 1975 before teaming up with singer Steve Perry to define the classic rock of the late ’70s and ’80s. The triple-platinum Infinity in 1978 started the run that few bands would match. Evolution and Departure would follow with more hits, all leading up to 1981’s iconic Escape. Not only did it contain inescapable hits like “Don’t Stop Believin,” “Who’s Crying Now” and “Open Arms,” but it was the first music album turned into a videogame – a truly visionary move at a time when most people didn’t know what that meant. Fans worldwide snapped up 12 million copies, and FM radio had programming for life. The follow-up, Frontiers, was only kept out of the #1 spot by a little album called Thriller. 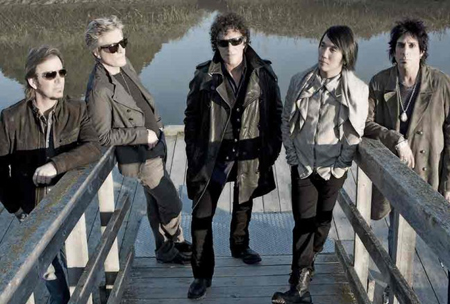 It’s a run that continues to this day. Through the years, Journey has kept the music alive with classic-rock airplay and a touring schedule most bands can’t or won’t match. With the changes and upheavals in the music industry, nothing can replace the live concert experience.

A short string of lead singers followed Perry’s departure, but nothing quite worked until Schon found Pineda. It’s one of the most unlikely success stories in rock ‘n’ roll history: Schon discovered the singer in a Filipino cover band via YouTube. He quickly reached out to the incredulous singer and a new era of Journey was born.

The hits came coming, with the new album Revelation debuting at #5 in 2008 and continuing their streak of platinum albums. A two-year world tour sealed Pineda’s place as the voice of Journey. A new album came with Eclipse – this time with Pineda’s full participation as a band member and songwriter. And the TV exposure of “Don’t Stop Believin'” made the song is the #1 digital catalog song in history, with sales of more than 5.4 million in the U.S.

While touring is still Journey’s #1 passion, it doesn’t mean there isn’t time for a world view. The band recently recorded a cover of The Police’s “Synchronicity II” for a charity CD that fights child slavery in Third World countries, along with Stevie Wonder, Steven Tyler and more.

What has the band learned over the years?

“I think we just got it right, you know? We wrote a lot of really great songs, the three of us; myself, Steve Perry, and Jonathan Cain. And it was like we just got some things right and I think that’s why it’s etched in stone,” Schon said. As for the future, “I’m still an aspiring guitarist, you know. I never feel like I’ve learned everything on the instrument. You have to love what you do. I certainly do.”