SHALOM MONTREAL – STORIES AND CONTRIBUTIONS OF THE JEWISH COMMUNITY

The exhibition highlights how the Jewish community has participated in the city’s growth and development during the 20th century. It features remarkable achievements in a variety of sectors — architecture, heritage preservation, health and science, human rights, business, the arts and culture — that have benefited, and continue to benefit, all Montrealers. Full of personal reminiscences, videos and photos, the exhibition invites visitors to discover the fascinating stories behind many major contributions to the city.

Shalom, a word symbolizing openness to others and friendship

The history of Montreal’s Jewish community reflects the strength of its traditions and centuries-old roots here. Nourished by a fertile cultural and intellectual climate, its many significant achievements attest to a desire to work together and help one another.

“Shalom Montreal is part of our tradition of organizing exhibitions focused on the various communities that make up our city. The Jewish community has made numerous significant contributions to Montreal, and we would like to raise the awareness of these many achievements among Montrealers of all backgrounds. Although there are many examples to choose from, we have selected the events and projects that have most affected Montrealers and shaped the city we live in today,” notes Suzanne Sauvage, President and Chief Executive Officer of the McCord Museum. 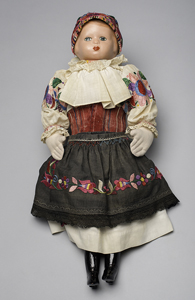 Visitors are welcomed to the exhibition by a testimonial from Elaine Kalman Naves, a Jewish writer and journalist who recounts her arrival in Montreal and her life here. Exoduses, describes the various waves of Jewish immigrants to Montreal over the 20th century, against a backdrop of national revolutions and global conflict. It also looks at the anti-Semetism that the Montreal Jewish community suffered for many decades in the 20th century.

Memories, gathers together meaningful objects that belonged or still belong to Jewish immigrants, artefacts that have accompanied them throughout their journey. Part of a Torah scroll (late 19th century), a tablecloth made by 50 young orphans (1920-1927), and a doll named Toniška (about 1941) are among the items on display.

Living Together, highlights the contributions of Jews to the Montreal community. The heart of the exhibition, this area explores how the Jewish and Montreal communities have learned to build, care, struggle, do business, and create together.

Building Together
Jewish architects have distinguished themselves in Montreal, whether by designing buildings that have become important symbols of the city, preserving our urban heritage, or participating in various real-estate developments. Furthermore, thanks to Jewish philanthropy, the urban landscape throughout the city has been enriched by numerous buildings, particularly on
university campuses and in the fields of medicine and culture.

Caring Together
Montreal Jews have often faced discriminatory practices, which prompted them to establish their own institutions. However, Jewish organizations have never responded in kind, and instead have long been in the forefront of the movement for universal access to health care. The creation of the Jewish General Hospital of Montreal is a perfect example of this. In the field of basic research, Jewish scientists like Dr. Mark Wainberg and Dr. Ronald Melzack have made significant contributions, particularly since the 1960s.

Struggling Together
Many Jews seem especially motivated to take part in social struggles for fairness, justice and human rights. Some attribute their passionate commitment to such causes to the fact that they have faced anti-Semitism, others cite Jewish religious teachings, while yet others mention the revolutionary heritage of Russian immigrants. Whatever their motivations, they have left their mark on 20th-century Montreal with their decisive contributions to universal social movements such as women’s liberation, workers’ rights, and the fight against racism and exclusion. Among the objects presented are a community newspaper and election posters. 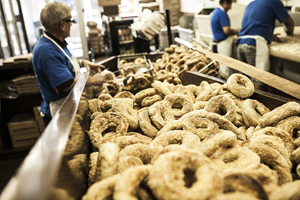 Doing Business Together
The Jewish community has played a significant role in Montreal’s economy. Some entrepreneurs in particular have created hugely successful commercial ventures. Often, small shops have developed into major business empires or become internationally known symbols of Montreal. Some of these businesses have left a mark on the culture of the city, and even of the province. Among the objects displayed are articles of clothing created by well-known brands like Le Château, Parachute and Canadelle, along with iconic artefacts like a Steinberg’s grocery bag.

Creating Together
The final sub-zone focuses on three fields in particular — music, the visual arts and literature — to convey the incredible vitality of the Jewish artists who have lived in Montreal. Visitors can see books by Irving Layton, a gramophone (1902-1925) designed by Émile Berliner, Mordecai Richler’s typewriter, and paintings of Montreal done by the mid-20th century artists collectively known as “Jewish Painters of Montreal” (Neumann, Muhlstock, Beder, Mayerovitch and Reinblatt).

The exhibition concludes with a documentary-style multimedia installation in which 14 young Montreal Jews discuss their views of the city, their contributions to the community, and what it means to be Jewish in Montreal in 2018.