Ten Canadians, including four Quebecers, are among those officially selected

The Montreal International Musical Competition (MIMC) is has announced the names of the candidates who will take part in the 14th edition of the Competition—the sixth dedicated to voice—this coming May 25 to June 5.

This year, the Competition received submissions from 123 classical singers of ages 20 to 33, from some thirty countries on five continents. The MIMC was pleased that the Montreal Competition received so many high quality online applications, as well as the many professionals from major international schools who supported the candidates.

Over the past few weeks, three selection committees made up of Canadian opera specialists Olivier Godin, Aline Kutan, Chantal Lambert, Rosemarie Landry, Grégoire Legendre, Michael McMahon, and Richard Turp selected the 24 most promising young singers by auditioning their submitted video recordings. Festival management looks forward to welcoming the contestants in the hope that the Competition will serve as a springboard for their careers.

At the end of the competition, the winners will be offered various engagements, and will share over $80,000 CAN in prizes, including a $30,000 First Prize.

The mission of the Montreal International Musical Competition is to discover and support young singers, violinists and pianists who demonstrate exceptional mastery of their art. The MIMC is the only international competition in North America to be held annually and to present three disciplines in a three-year rotation. Since its first edition dedicated to voice in 2002, more than 2,400 hopefuls have entered the competition and nearly 400 have performed in Montreal, much to the delight of music lovers.

The Finals take place June 2-3, and The Laureates Concert is on June 5 at Maison Symphonique. For tickets please contact: 514 842-2112 or www.placedesarts.com

Created under the patronage of Clarence and Arija Stiver, the Lied and French Art Song Prize, which will be awarded starting with the 2015 Voice edition, comes with a $5,000 scholarship. Mrs. Stiver, a devoted music lover who is a member of the Board of Directors of the Toronto Summer Music Festival, explains: “Our goal is to encourage young singers to discover and perpetuate a repertoire that we don’t seem to hear very often these days, one that offers a very rich and diverse musical literature.”

New member on the International Jury

After announcing his retirement from opera last April, Ben Heppner regretfully informed the Competition that he would not be able to sit on the MIMC’s international jury this year, as he will be will be making his musical theatre debut around the same time. MIMC wish him every success in the role of Isidor Straus in the production of Titanic that will be presented at the Princess of Wales Theatre in Toronto this spring.

The Canadian tenor will be replaced by Korean-born coloratura soprano Sumi Jo. “I am thrilled to sit on the jury of this prestigious competition and look forward to being back in Montreal,” commented Sumi Jo, who was in town for her latest concert on December 1. 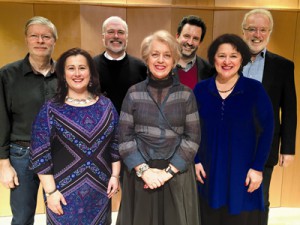