Andrew Carter the morning man on CJAD is the same guy I’m having coffee with. His on-air personality is virtually the same as his off-air persona. Human, witty and down to earth.

Five days a week, hundreds of thousands of Montrealers wake up and start their day listening to Andrew Carter, the morning man on CJAD. Not only has the station maintained its dominance of Montreal AM radio market, the weekly audience grew to 438,000 listeners in 2014. The popularity of any radio station’s ‘morning man’ is a key element in establishing ratings because listeners tend to stay with the station they start their day with. Andrew Carter has occupied that position at CJAD 800 for thirteen years, and his easy-going on-air personality has proven to be a winner for the station.

Several Montreal-area foundations have benefitted from Andrew Carter lending his name and time to participate on their Boards. He’s active with the Cedars Cancer Foundation, The West Island Palliative Care Foundation, and The Weredale Foundation (that runs Camp Weredale). He has also become ‘the face” of the new MUHC super hospital. These commitments not only involve the Board meetings, but also attending the many fundraising events and other public functions.

Andrew’s day begins long before he turns on his microphone at 5:30 am. “I get up at 4am, and take my Boston terrier for a quick walk – and this past very cold winter; some of the walks have been very quick! I get to the station a little before 5am, and I consume as much coffee and information as I can. It takes a team to get the show on the air, and we hit the ground running at 5:30 and don’t let up until nine. I believe that the show should be a voyage of discovery, as well as entertaining.”

“I work at a very high level, and it takes a lot of concentration and you do get tired with the crazy hours. I love the job – I just have to deal with the fatigue.” Those crazy hours and demanding schedule have taken a toll. “I suffer from mild depression, mainly during the winter months. It’s associated with the absence of sunlight. I can feel it coming on six to eight weeks into the winter. Fortunately it doesn’t affect my work. It was my Mom who first noticed it.”

“We’re proud of Andrew – both for his success on-the-air and his leadership in the community. What most people don’t know about Andrew is how active he is with different community groups. It seems like almost every night of the week he is out emceeing or participating in another charity event. He truly cares about Montreal – just as he cares about his listeners.”
…Chris Bury, CJAD Program Director 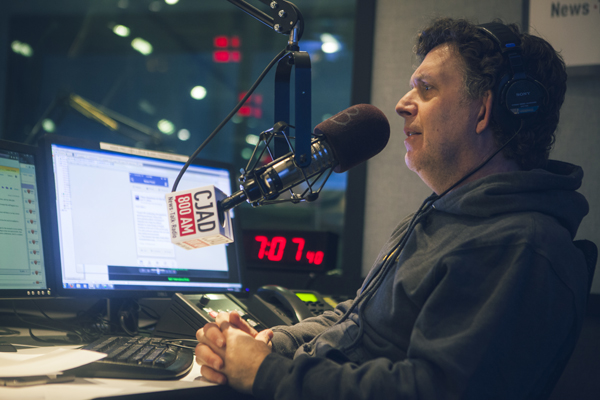 “Bell has been terrific with their Let’s Talk campaign to foster awareness for mental health issues. Clara Hughes has experienced depression, and that makes her a great spokesperson. But I believe we still have a stigma about mental illness. Going to a psychiatrist should be considered as routine as going to the dentist.”

“Doing this morning talk show is a lot harder than I thought it would be. As a listener – you may not appreciate that there is a lot of work going on. For example – it’s difficult to get people to come on the air so early in the morning to comment on a breaking news story. They’re just waking up themselves and may not know as much as we do. Understandably they’re reluctant to make comments in that situation.”

“We have our regular on-air contributors, beginning at 5:47 with John Moore who is a former Montrealer and the morning man at our sister station in Toronto. We have a comfortable rapport, and he’s familiar with Montreal. Dr. Mitch Schulman, Chef Ricardo and Jean Lapierre bring their expertise and perspective to the morning’s news. I don’t try to be the expert on everything, but I have to know enough to speak with the experts. ” Terry Mosher (aka Aislin) continues his regular early morning Friday appearances. “Terry has become a good friend over the years – and he helped me a lot when I was going through a difficult period in my life.”

“We have a huge audience at CJAD, and I understand that our listeners like to start their day with a familiar voice. It’s important to me that I make the show a one-on-one conversation. I find it fascinating that we play that role in so many Montreal households.”

After being purchased by Bell Media, CJAD, Virgin Radio and CHOM all moved to the Bell Media’s east end campus at Papineau and Rene-Levesque. “We were apprehensive about leaving our comfort zone in the Fort St. studios. In my opinion – it’s the best thing that has ever happened to us. I feel that is has energized the station. Our colleagues on the French-language stations are big stars – several of them are also on TV. That energy permeates the building. Plus – we have our fellow AM radio broadcasters from TSN 690 sports in the same building.”

Andrew grew up in a family of curlers; and for many years he was very competitive and it was more than a hobby. “I made the team that represented Quebec at The Briar in 1985, and again in ’90 and ’91. The problem is that at that highest level of competition – it was no longer fun for me. I had to win. At the beginning I really loved it. The two best days of my life were the birth of my daughter (because she was the first) and stepping onto the sheet for the 1985 Briar.” But the pressure of competition and took the lustre away from Andrew’s love of the sport. “I stepped away from curling and took up golf – which I really enjoy.”

“I represent the station and the foundations at many charity golf tournaments, and I’ve had the pleasure of playing with Anthony Calvillo, retired Montreal Canadiens Henri Richard, Yvon Cournoyer and Bob Gainey. Bob has become a good friend. Myles Goodwin of April Wine is also good friend and a golf buddy. How cool is that to spend several hours on a course with those guys?”

“Since I last spoke with you, I’ve taken up painting and acting. I started painting about five years ago. Terry Mosher taught me how to draw a tree – which really isn’t painting. However – his wife Mary has been terrific in helping me to get better.” 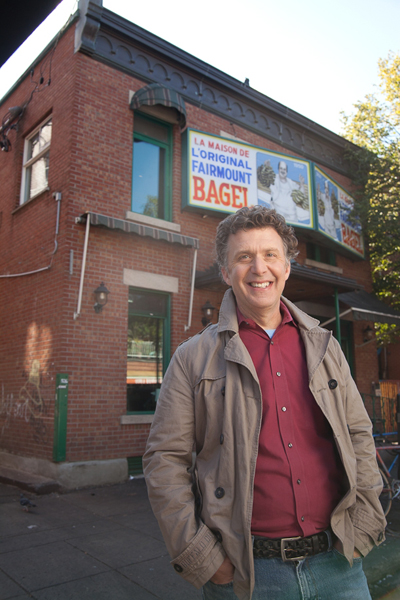 Andrew Carter is a passionate Montrealer.

“I took up acting and joined ACTRA to see if I could make a little extra money doing TV commercials. The lessons were both exhilarating and humiliating! I realized very soon that the worst actor I’ve ever seen on TV is still better than me!” Still – Andrew did manage to land an appearance as Phil the reporter in the TV series Blue Mountain State and again as a reporter in Betty and Coretta, a TV movie about Dr. Betty Shabazz and Coretta Scott King, the surviving widows of Malcolm X and Dr. Martin Luther King respectively. Andrew isn’t about to leave CJAD for tinsel town any time soon…

“I enrolled in Joey Elias’ stand up comic course because I thought it would give me some new skills that I could bring back to the show. It was a terrific experience – and I did indeed learn some new ideas for the show. Stand up is a complex combination of cartoon and language – and of course delivery.”

As 9am rolls around and The Andrew Carter Morning Show is in the books for another day, Andrew often walks down to hall to visit with CHOM morning man Terry Di Monte. “Terry is a contemporary and he gets it. He understands the rigors of our schedule – because his is the same. He’s become a friend he’s also been supportive when I get feeling a bit low.”

After thirteen years at the helm of The Andrew Carter Show, at times Andrew is still a little bit awed by it all. Perhaps it’s that built-in humility that makes him so attractive to the growing number of listeners to CJAD’s powerhouse morning program.

The Andrew Carter Morning Show is on CJAD 800 radio, Monday to Friday from 5:30am to 9am.