“what are they trying to tell us?”

Every day there are new reports of mysterious sightings in the skies, grainy videos of humanoid shapes moving in shadows, intricate crop circle formations that appear overnight… Are these phenomena for real, or are we being deceived? Join multi-talented writer and performer Damien Atkins in his obsessive and provocative one-man show that asks: do you believe?

The Segal Centre and Crow’s Theatre are proud to present the world premiere of WE ARE NOT ALONE written and performed by four-time Dora Award winner Damien Atkins. Based on Atkins’ personal investigation into the UFO phenomenon, this out-of-this-world solo creation assembles an award-winning Canadian creative team led by directors Chris Abraham (Crow’s Theatre) and Christian Barry (2b Theatre). Presented as part of the 2015 Festival Montréal en lumière.

A PLAYWRIGHT BECOMES OBSESSED, PROVOKED, POPULATED.
We Are Not Alone is a one-man tour-de-force that compels audiences to consider a fundamental question: what do you believe? Blending fiction with historical facts, pop culture references with firsthand accounts, multi-talented actor/writer Damien Atkins, as himself, takes us down the rabbit hole of paranormal investigation, transforming into a multitude real life characters (and some not so real).  As he scratches away at the truth, the playwright uncovers the extraordinary humanity behind one of the most phenomenal subjects of our time. Raw, revealing and wonderfully quirky, We Are Not Alone is an out-of-this world theatrical encounter with one of the country’s most electrifying performers. 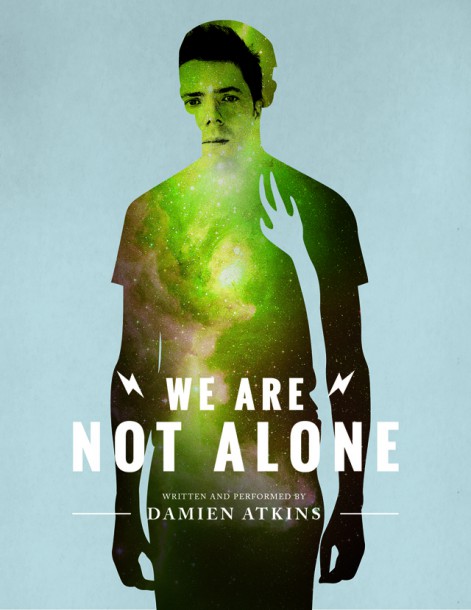 Previously seen on the Segal stage in Geometry in Venice, Amadeus and Cabaret, the Toronto-based Damien Atkins is one of Canada’s most prolific theatre artists. Most recently, his acclaimed performance as Prior Walter in Soulpepper Theatre’s Angels in America earned him a Dora Mavor Moore Award for Outstanding Male Performance and a Toronto Theatre Critics Award for Best Actor. Dividing his time between acting and writing, Atkins is the youngest playwright to have ever been produced at the Stratford Festival with Good Mother (2001).
“I’ve always been fascinated by space movies and extraterrestrial stories, and I’d never seen something like that onstage. I started looking into it, reading people’s accounts and some of the famous UFO stories, and I became more than fascinated, I became obsessed. It became personal, somehow,” explains Atkins as his impetus for writing this new piece.
Atkins and We Are Not Alone co-director Christian Barry attended the 2014 International UFO Congress in Arizona for research. This experience came to play a pivotal role in the development of the play.
“When people find out I’m writing about UFO’s they get excited, sometimes they come out of the closet as believers, sometimes they gently start to berate me for wasting my time. Is it all a hoax? Or is it the most important story in history?” Atkins continues.
“There are fierce and fascinating opinions on either side of the UFO debate and this project’s aim is to explore what drives a person to believe one explanation over another. Why is it so easy to believe in some things and so difficult to believe in others? How much proof do we need?” says Abraham.
Barry continues: “Exploring the UFO phenomenon also reveals some psychologically complicated issues for humankind that we look forward to exploring in this piece. If we are, in fact, not alone in the universe – does that mean that humanity is headed for a humbling?”