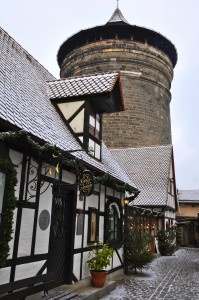 Germany is home to more than 150 Christmas markets and if you’re tempted to think they’re only about lebkuchen and mulled wine, you’re in for a surprise. Signaling the beginning of Advent, these open-air celebrations offer a whirlwind of ceremony, folklore and tradition rooted in customs dating back to the Middle Ages. To learn more about the rituals that define Germany’s holiday season, my mother and I decided to participate in Christmas in the Heart of Germany, a river cruise along the Main-Danube Waterway offered by Avalon Waterways. 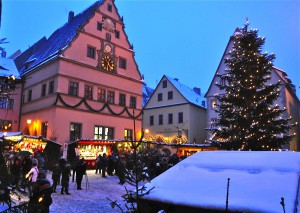 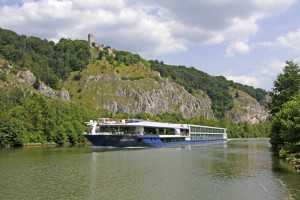 Floating Room with a View

We boarded our ship the MS Affinity in Nuremberg. Built intentionally small to enable it to pass through the Main-Danube Canal’s 38 locks (and with fewer than 70 cabins), the ship felt more like a floating boutique hotel than a cruise ship. Our stateroom on the Royal Deck featured large beds topped with European-style white cotton duvets, a stylish bathroom complete with a pair of plush robes, and floor-to-ceiling glass doors that opened onto a French balcony.

Beyond the ship’s spacious lobby was a lounge featuring a Christmas tree that could have been lifted from the pages of a Grimm Brothers fairytale. Panoramic windows offered views of Bavaria’s snowy riverbanks and the icy, serpentine river. The ship’s intimate size made it easy to get to know the other passengers. Dinner was informal–the ship’s policy calls for no assigned seating or formalwear—and a glass of wine later, we were chatting with newfound friends over a locally-inspired menu.

The next morning we woke to snowflakes, eager to explore Nuremberg, home to the Christkindlesmarkt, one of Germany’s most atmospheric Christmas markets. Considerately, for my 79-year-old mother and others, passengers were divided into groups (colour-coded according to stamina levels and desired pace), supplied with headsets and an experienced guide.

Although extensively bombed during WWII, Nuremberg has been restored to its original splendor. Many of Germany’s original Christmas Markets were held around their city’s main church to attract churchgoers and Nuremberg’s was no different. The soaring gothic spires and charming half-timbered houses within the Old City’s fortified walls made a Christmas card-worthy scene. 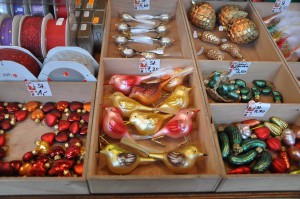 The concept of Nuremburg’s Christkindlesmarkt dates back to the era of Martin Luther (1483-1546) the Protestant reformer who abandoned the Catholic veneration of Saint Nicholas and moved the custom of gift-giving to Christmas Eve. Today, this tradition continues, with the golden-haired Christmas Angel (Christkind ) appearing on the balcony of  the Church of Our Lady to kick off the holiday season and open the 180 market stalls filled with gift items such as wooden toys, pewter tableware and woolen hats.

Nuremberg is also famous for its sausage specialties. Nurnberger bratwurst–a minced pork sausage no larger than a pinkie finger–was designed, according to legend, to fit through a fortress keyhole. Smoked over beechwood charcoal, it’s traditionally served on a bed of sauerkraut. Also popular is gingerbread, a fragrant pillow of spices too tempting to resist.

Our next excursion was Bamberg, beloved by Christmas aficionados for its nativity scenes. Created by local residents, they range from elaborate, life-size outdoor sets to small hand-crafted villages tucked inside many of the town’s churches. The market stalls are handed down from one family member to another with each generation carrying on the tradition of selecting items for sale with care. Designated a UNESCO World Heritage Site for its well-preserved medieval core, the snow-capped roofs of Bamberg’s pale yellow buildings makes a charming Christmas vision.

Later that afternoon we sailed to Wurzburg, “Pearl of the Romantic Road” and delightful for its vineyard setting and spectacular Bishop’s Residenz, another UNESCO World Heritage Site.  Rothenburg was next, its snow-laden trees and historic buildings glowing in the winter sun offering instant Christmas spirit.

Resting back on the ship, we relaxed with the Affinity’s many onboard activities. One night we enjoyed a concert by the string trio La Strada and another night, an expert lectured on the engineering marvel of the Main-Danube canal. Our favourite activity was joining the ship’s crew in a rousing chorus of international Christmas carols.

Holiday traditions continued in the lovely villages of Miltenberg and Wertheim where highlights included half-timbered houses, castle ruins and the Wertheim Glass Museum, with its range of sparkling blown-glass such as whimsical dill-pickle ornaments and delicate Christmas garlands.

Wrapping up our river cruise was a final stop in Frankfurt, site of the country’s very first market. A light snow was falling as we arrived in the Römerberg, the square at Frankfurt’s historic heart. The market was in full swing with over 200 gaily-decorated wooden stalls, a huge Christmas tree and the sound of church bells ringing. We browsed the booths festooned with bright lights and before long were snacking on Bethmännchen, a regional pastry of marzipan and almonds that’s a local favourite.

Feeling chilled, we headed to a Glühwein stand where a steaming mug of the mulled red wine redolent with Christmas spices soon warmed us.  Given the option to get our deposits refunded or keep our mugs, we kept them as souvenirs. 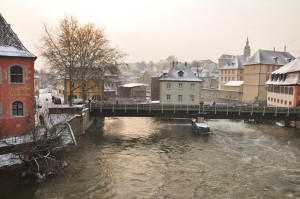 As our yuletide river journey drew to a close, we enjoyed a farewell dinner and shared memories with our shipmates. Packing our bags, we realized that my mother and I had gathered mugs from four different Christmas markets and had the beginnings of a set–proving it’s never too late to begin a new holiday tradition. 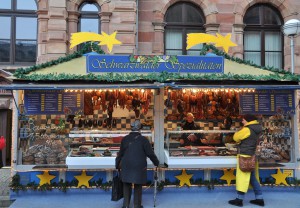 Getting Around: Avalon Waterways offers Christmas in the Heart of Germany a festive-season holiday between Prague, Czech Republic and Frankfurt, Germany featuring a deluxe 8-day, 5-night cruise along the Main-Danube Canal stopping at Nuremberg, Bamberg, Wurzburg and Wertheim-Miltenberg. Superior hotels (Prague), meals, local wines, receptions, guided sightseeing and all excursions are included.

We travelled on the M/S Affinity, but in 2015, the ship will be the Vista, with two full decks of suites featuring wall-to-wall panoramic windows. Visit www.avalonwaterways.ca or call 1 800 286-3636. 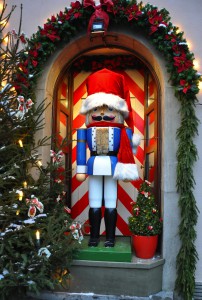 Dates for Germany’s Christmas markets vary by location but most open during the last week of November and close the third week of December. For more information, visit the Official German Tourism website at www.cometogermany.com 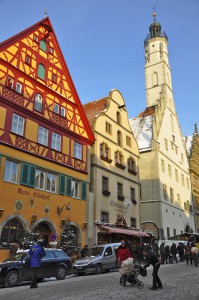