Rick Mercer has won 25 Gemini Awards for his work in television, authored two best-seller books, and has received numerous awards from an eclectic group of organizations; including Officer of the Order of Canada in June 2014; and Honorary Colonel of the 423 Marine Helicopter Squadron based in Shearwater, Nova Scotia. He has entertained Canadian troops in Afghanistan, and donates time and money to several charities.

I grew up in a hopelessly normal family, my Dad worked for the Department of Fisheries and Oceans and my mom was a nurse. We didn’t have a TV when I was young, because for some reason my parents had decided that they would buy a piano before buying a television. A family that had a lot of money had a paved driveway – we didn’t. 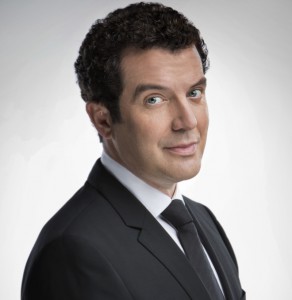 Alluding to his lack of scholastic success, Rick said; “I was really good at extra-curricular activities at school, especially the Theatre Club. When I was in high school, I was drawn to the drama club. I signed up for back stage work – but the teacher had other ideas. She said told me to write and perform in the play, saying: ‘You should write it because you never shut up…’ As I was writing the play, I began thinking that I would like to act in it as well. It was about a punk band – completely different from what the other schools were doing. Well, wouldn’t you know? We went and won the Provincial Drama Festival Competition!”

“We decided to put the show on at LSPU Hall in St. John’s. I contacted the theatre and they told me that it was an 80/20 split from the ticket revenues. Well, I wasn’t going to let them push me around – and told them it was 50/50 or nothing! They calmly explained that we would get the 80%. Some negotiator I was…” It was a huge success, and we became like rock stars. We even had rock bands that would come and play before the performance.”

“There was an appetite for programming like this in Newfoundland at that time. The biggest show on TV was Wonderful Grand Band. They had political satire and comedy as well as music. So we were a performing a live show in that genre.”

Rick was off and running – and he left high school before graduation to pursue his career in theatre and then to television. “It was like the proverbial light bulb went off in my head! This is what I was meant to do.”

Politics is my baseball…

“I wrote a one-man show. Meech Lake was in the news, and the national media was being very hard on (then Premier) Clyde Wells. Charles Lynch was particularly hard on Premier Wells and Newfoundland in general. The show was called Show Me The Button, I’ll Push It or Charles Lynch Must Die. The National Arts Centre in Ottawa sponsored the show. Because it was so topical, I was invited to appear on Midday and debate Charles Lynch on air.” The show itself became a news item and ticket sales went through the roof.

“As it happened, there was another show booked in Toronto’s Factory Theatre, Vancouver, Calgary, and Ottawa for a month in each city. That show didn’t work out, and all these theatres had a hole to fill. So they asked me to fill the open weeks. Wasn’t a hard question to answer… I did that show for a year!” Continuing, Rick adds; “How could you ever predict all those elements coming together?”

“George Anthony said that I should be on CBC. I auditioned for a show that also included Mary Walsh, Cathy Jones and Greg Tomey. We did six episodes of that show, and This Hour Has 22 Minutes is now into its 22nd year. I did it for eight years, and a popular part of the show was my two-minute rant.” Rick’s 1998 book Streeters was a compilation of his 22 Minutes rants, and it was a national best seller. 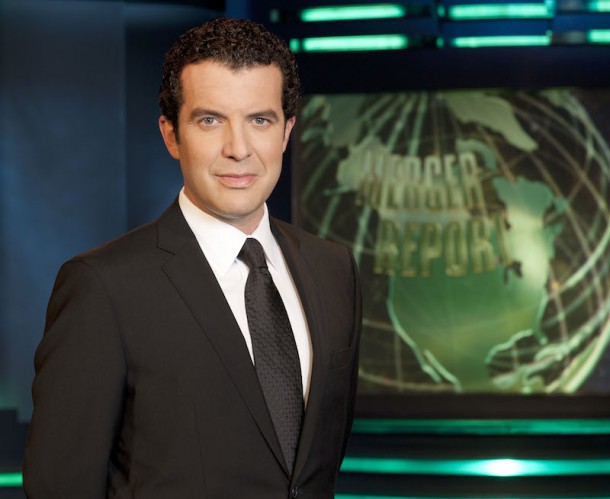 The Rick Mercer Report is Canada’s most popular comedy show

A hugely popular feature on the show was the Talking To Americans segment. Rick would travel to US cities and do man-in-the-street interviews, asking Americans for their opinion on Canadian politics, weather and other issues. Not surprisingly, it revealed an enormous ignorance of Canada by our neighbours to the south. Rick gained access to high ranking US political figures, including then-presidential candidate George Bush; who responded to questions about Canadian Prime Minister Jean Poutine. Americans responded favourably when asked if Canada should switch from our 20 hour per day clock to the American 24 hour per day clock. It was all in good fun, and so popular that CBC co-produced a special with Rick that attracted 2.7 million viewers, the highest rated television special in Canadian broadcast history.

“22 Minutes was a great job – but it wasn’t my show. I wanted to control the show, and I’ve been very fortunate to control my own career.” At the end of the 2000-2001 season; Rick announced his departure from the show.

From 1998 to 2003 Rick also created and co-produced Made In Canada, a sitcom spoof about the Canadian television business. His character is a conniving and back-stabbing person who will do anything to get ahead in the company, including having his brother-in-law fired so that he could then take over his job. The show, filmed economically with a single camera has been syndicated as The Industry in The United States, France, Australia and Latin America.

A unique component is the segment when Rick visits Canadian towns to participate in local events, doing everything from swimming with dogs, experiencing zero gravity, riding with the Coast Guard and then going out with a lobster fisherman. “I only go someplace to celebrate the local people we’re working with. My job is to help people relax so that they can shine. I have to establish that trust factor to help people be comfortable and to just be themselves. I’m the guy who’s doing his best to participate along with our program guests.”

“A lot of our on-location segments come as a result of people sending in suggestions. Plus, everyone involved with the show keeps an ear out for an activity and location that is unique and entertaining.”

Commenting about previous segments with political figures, including a tour of 24 Sussex Drive with then Prime Minister Paul Martin, Rick states that he doesn’t have the same enjoyment about appearing with political figures; “One of the ways that the show has evolved is that I don’t want to hang out with those people (politicians) anymore.”

After two record-breaking seasons on Monday nights, The Rick Mercer Report was moved to Tuesday evenings. “It was clear that something had to be done…” quipped Rick – tongue firmly planted in his cheek…

“The moments I like best are going to a community and meeting some exceptional people. The show is unabashedly Canadian.” In keeping with his pro-Canada stance, Rick is on the board of The Historica-Dominion Institute, an organization dedicated to the promotion and study of Canadian history, identity and citizenship.

Published in 1998, Rick’s first book Streeters, was a collection of his most popular rants from 22 Minutes – and it was a best seller. The Rick Mercer Report: The Book was his second and it too was a collection of Rants from the first four seasons on The Rick Mercer report. It was another best seller and has been re-printed eight times. A Nation Worth Ranting About was published in 2008, and was yet again another best seller for the man who was born for television.

Rick is generous in his support of charitable organizations, and often invests his own money in addition to his celebrity to the organizations he supports. In fact, the citation for his Order of Canada induction notes “his ability to inspire and challenge Canadians through humour” and his work with charitable causes.” He donated the fees he earned for appearing in ads to promote Harry Rosen men’s stores to Toronto’s Casey House, a hospice for people with HIV/AIDS. He is a patron of Hope Air, which provides free non-emergency medical flights for people in financial need. He is part of the It Gets Better campaign which is a series of videos to help gay and lesbian youth overcome bullying. He donated the $15,000 cash portion of his Governor General’s Award Performing Arts Award to LSPU Hall, the St’Johns theatre where he got his start.

Along with Belinda Stronach, he is Co-Chair of Spread The Net, a UNICEF sanctioned organization dedicated to providing sleeping nets for children in Africa, to help prevent malaria spread by mosquito bites. It is now managed in Canada by Plan Canada, an NGO with a solid reputation. Since starting in 2008, Canadian high school and university students have raised more than $1,200,000 for the Spread The Net campaign; generating over $170,000 in 2014. 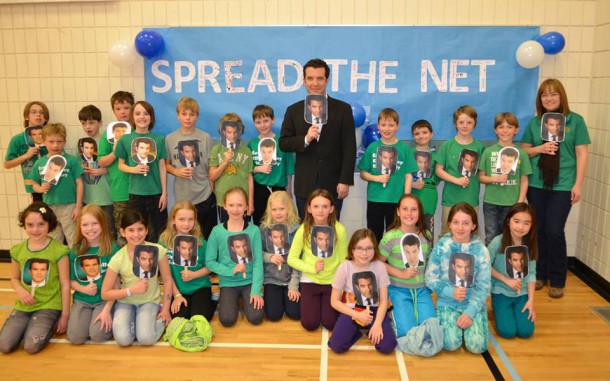 Spread The Net has raised over $1.2 million since its inception in 2008

“There’s nothing funny about malaria, but we found a way to involve the show through partnering with high schools and universities. One of my favourite shows is when we visit a high school and see first-hand the enthusiasm and commitment that the students have for this project. It’s a super ‘feel good’ event – and it works! A simple $10 mosquito net can protect a child, and malaria infections are way down. It’s no different from volunteer work most people do – it’s just that I have a TV program to help me.” Since its inception in 2008, Spread the Net has donated well over 500,000 mosquito nets.

“The show has many talented writers, but I write The Rant myself. I write it on Thursday night for taping in the alleyway on Friday. Usually it comes fairly quickly, but occasionally it’s a struggle and I end up sleeping on the couch in my office. I have to remember that we’re a family show, and that we are primarily a comedy show. That said – I have two minutes to get something off my chest. ”

“After Ottawa teenager Jamie Hubley committed suicide because he was bullied for being gay, I was personally angry. I believe that I have a responsibility to make a statement and take a position about how we need to support the gay and lesbian kids who are being bullied by their classmates. It’s not acceptable. Jamie was one of 300 kids a year in Canada who take their own lives – that’s 300 too many.”

The Rick Mercer Report will begin its 12th season on Tuesday, October 7 at 8pm on CBC Television. To listen to Rick’s most popular Rants, visit: www.rickmercer.com