Kinky Boots and Pippin represent two “can’t miss” choices. These Tony Award winning musicals were so good you can count me in to see them again if the opportunity presents itself.

In Kinky Boots (www.laplacedesarts.com), Charlie Price has reluctantly inherited his father’s shoe factory, which is on the verge of bankruptcy. Trying to live up to his father’s legacy and save his family business, Charlie finds inspiration in the form of drag queen Lola. A fabulous entertainer with some sturdy stilettos, Lola turns out to be the one person who can help Charlie become the man he’s meant to be. 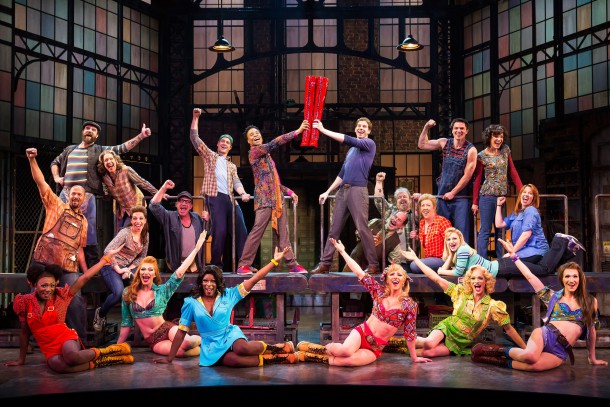 Produced by Westmount’s Adam Blanshay and based on a true story and successful Miramax movie, Kinky Boots won 6 Tony Awards in 2013, including Best Score by pop icon Cyndi Lauper

As they work to turn the factory around, this unlikely pair finds that they have more in common than they ever dreamed possible and discover that when you change your mind about someone, you can change your whole world. Inspired by a true story and based on the Miramax motion picture written by Geoff Deane and Tim Firth, Kinky Boots features a warm and witty book by Harvey Fierstein and a richly diverse musical score from pop icon Cyndi Lauper, in her stunning theatrical debut.

The standard performance schedule for Kinky Boots is as follows: Tuesday at 7 pm, Wednesday at 2 pm and 8pm, Thursday at 7 pm, Friday at 8pm, Saturday at 2pm and 8 pm, and Sunday at 3 pm. There is a general ticket lottery each day; lottery entries will be accepted outside the Al Hirschfeld Theatre box office (302 West 45th Street) beginning two and a half hours prior to each performance; and names will be drawn at random, for a limited number of $37 tickets, two hours before curtain time. 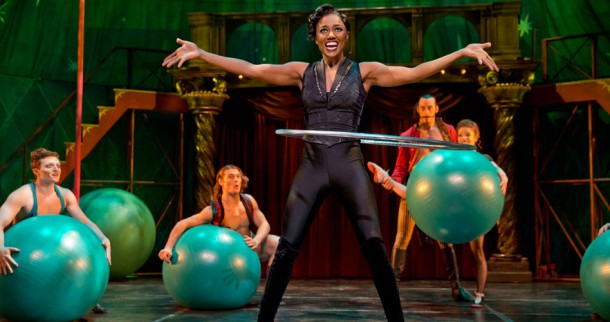 Pippin is back on Broadway for the first time since it thrilled audiences 40 years ago. The show won the 2013 Tony Award for Best Musical Revival.

Pippin, meanwhile, is back on Broadway for the first time since it thrilled audiences 40 years ago. The show won the 2013 Tony Award for Best Musical Revival. With a score by Tony nominee Stephen Schwartz (Godspell, Wicked), Pippin tells the story of a young prince on a death-defying journey to find meaning in his existence. Will he choose a happy, but simple life? Or will he risk everything for a singular flash of glory? This show arrived on Broadway direct from an acclaimed run at Boston’s American Repertory Theater.

This captivating new production is directed by Tony winner Diane Paulus (Hair and The Gershwins’ Porgy and Bess). It features sizzling choreography in the style of Bob Fosse and breathtaking acrobatics by Les 7 doigts de la main of Montreal. Gypsy Snider, from Les 7 doigts, notes that the musical was originally about a travelling theatre troupe. “We made it into a travelling circus,” she told me. “I got to sit down with Stephen Schwartz several times. He was incredible. Pippin has a tremendous history. This was the first musical to have TV commercials. It launched the career of actor Ben Vereen and it marked legendary choreographer Bob Fosse’s first Tony Award. It is really about the existential crisis about a young man wanting to be extraordinary.”

Pippin is playing at the Music Box Theatre (239 W 45th Street). Tickets are available via Telecharge: 212-239-6200, 800-432-7250 or online: www.pippinthemusical.com. Shows are Tuesdays through Sundays, with two presentations Wednesday and Saturday. Tickets are priced at $59 to $277 each. Pippin runs two hours and 35 minutes, including 15 minute intermission.

It would be great to see both musicals come to Montreal one day. All I can tell you at the moment is that a touring version of Kinky Boots will be in Toronto for a limited 10 days engagement in 2015.