Denis Coderre has been fascinated with politics and political life since he was a youngster growing up in Saint-Alfonse-de-Rodriguez, a small village 30 kilometres from Joliette in the Lanaudière region of Quebec. A carpenter by trade, his father Elphege was also active in local politics, and his young son Denis was fascinated by the cut and thrust of the debate surrounding political issues. Elphege Coderre moved his young family to Montreal North in 1973 where he gained employment as a blue collar worker.

Denis Coderre is competitive and at times combative – qualities that are absolutely necessities in political life. However, he also has a tremendous intellect and his self-assurance enables him to have a healthy sense of humour. Political opponent and allies agree that Denis Coderre dominates a room with his natural charisma and easy flamboyance. Chantale Renaud, Coderre’s wife of twenty-five years commented in a LaPresse article, “When he enters a room – the only person you see is him.” After a successful career in Federal politics with the Liberals, the then 49 year-old Coderre resigned his seat in Bourassa to campaign for the Mayor’s job in Montreal, where he was elected at November 2013.

We met in a reception room of Montreal’s elegant City Hall, and at my request we spoke primarily about his life before politics, to give us a look into the life-forming events of Denis Coderre before public life.

“I won my first election when I was five years old. It was to be class President. After the election my teacher told me that no one else wanted the job – but I didn’t care about that because I did want the job. The next year – at six years old – I had an amazing teacher. I was hyper active and this was before Ritalin…. She asked me to make a speech in front of the class. My Dad built me a small podium, and made my speech. It was such a success that she asked me to make a speech every week. I went on to compete in Public Speaking contests. Despite my youth – I knew then that I wanted to be a politician.”

“I became the MC for functions at our school, and I participated at serving Mass regularly at our church. I became used to being in front of people and speaking to large groups.”

“The memories of two incidents when I was young have served me well in relating to people and a life in politics. I asked my father why he always got out of the car and talked to the guy who was pumping gas into the car – even in the dead of winter. He explained that it was a matter of respect for another human being. It wasn’t a great job – but that person deserved to be recognized.”

Moving on to describe the second seminal event; Mayor Coderre describes coming onto a scene in from of the City Hall when he was an adolescent. “There was a group of people who were having a vigorous debate – you could say a heated argument. They were challenging each other and doing their best to convince the opposing side to change their point-of-view. I realized that I liked what they were doing – that verbal sparring. I too wanted to do that.”

And so it was that after obtaining a degree in Political Science from Université de Montreal, and an MBA from University of Ottawa, Denis Coderre became involved in politics. He developed and enhanced his legendary organizational skills in a variety of Montreal North community organizations. He founded the Montreal North chapter of the Knights of Columbus, the AQDR (translated: Quebec Association for the defense of the rights of retired and pre-retired citizens), and he also founded the Montreal North Historical and Genealogical Society. Perhaps a civic over-achiever, Coderre additionally served as a member and president of the Richelieu Club Henri-Bourassa and was a member of the Montreal North Optimist Club.

Coderre’s future political career took shape when he joined and became president of the Montreal North Committee of Young Federal Liberals and also sat on the Board for the Bourassa Liberal Riding Association. His organizational talents and personal energy level were attractive to the national party, and he quickly found a political home within the federal Liberal organization. 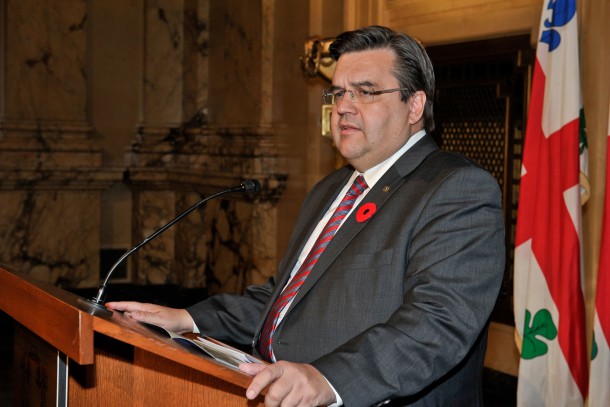 Referred to a The Rocky of federal politics by Katia Gagnon of LaPresse, Coderre’s path to becoming an elected MP was long and with enough disappointments to discourage most would-be parliamentarians. He first ran in Joliette in 1988 and was defeated. He ran again in 1990 and again in 1993. Ever the optimist, he points out; “In ’88, Brian Mulroney had to come to the riding three times to help my PC opponent to overcome my campaign. In ’90 I tripled the Liberal vote from 7% to 21%.” However it was the heartbreaking loss in 1993 that would have ended the political aspirations of many other people. “It was a really close election, but I won by 34 votes. After trying to gain election since 1988, I was delighted. I was at the podium and as I was about to begin my victory speech, my campaign manager tugged at my sleeve and said that there had been a mistake in the counting – that I had lost by 53 votes.” Smiling at that memory of that bittersweet moment; Montreal’s 44th Mayor noted; “I had to change my speech instantly, and I announced that ‘Tonight you have two Members of Parliament – one who is elected and another who will be elected’. In 1997 I erased that 53 vote deficit and with the music of What A Feeling, I won my seat by 8,900 votes.”

Following his election, the then Prime Minister Jean Chretien appointed Coderre to the Cabinet as Secretary of State for Amateur Sport. In what was generally considered a low-profile position, Coderre proved to be instrumental in the establishment of the World Ant-Doping Agency and worked diligently to have the headquarters located in Montreal. Working with his colleague Dennis Mills, the two cabinet ministers worked to establish a full-fledged Cabinet position for the Minister of Sport.
“Jean Chretien is kind of my political father – he’s always been supportive.”

In 2002 he was named Minister of Immigration, and in 2003 Prime Minister Paul Martin advised then Governor General Adrienne Clarkson to appoint Denis Coderre to President of the Queen’s Privy Council for Canada, which carried numerous Cabinet responsibilities. As Minister of Immigration, he brought in the Immigration and Refugee Protection Act. “I’ve always believed that part of my mission is to speak for the people who cannot or are not able to effectively speak for themselves – to be their voice.”

While he is not particularly athletic himself, Coderre recognizes the important that participating in sports can play in youth development. “It goes beyond the skills for the sport, and gets into the development of character in our youth. I volunteered as a defensive football coach for three years – and it was gratifying to see the positive impact we had with the boys. Many of them in Montreal Nord unfortunately come from homes without fathers, and the other coaches and I provided a positive male role model. We only realized that after the fact.”

“One of my heroes was Jack Donohue, who ran our Canadian basketball program. He used to say that in every team – a coach could find that rough diamond and polish it to make it better to make it shine. Our ‘diamonds’ were the players we helped to develop as people even more so than as athletes.”

As a former broadcaster on CKVL with a daily current events show, Coderre is a seasoned and very capable communicator. Following his election as Mayor of Montreal, he visited many of the other Mayors in some of the distant communities throughout Quebec. “I was welcomed warmly – and we share many of the same challenges with the provincial government. It was the first time that they had been visited by a mayor from Montreal. Together we can make a much more effective argument for the issues that affect us all.”

Denis Coderre is a fan of music; “I’m a big fan of opera, and I often play music to pump myself up before making a speech. I’m also a movie buff – and I have a collection of 3,500 DVDs.”

“My commitment to Montrealers is that we will bring Montreal back on track. We will be proud of our city. We need authenticity from our political leaders so that we can make progress. I don’t seek popularity – I seek respect. And that respect will come from doing the job of rebuilding Montreal’s status as one of the world’s great cities.”