Hudson Village Theatre is excited to welcome Norm Foster, Canada’s most-produced playwright, from July 24 to 28 as he stars in his newest play On a First Name Basis.

Foster plays an aloof author who realizes that he knows nothing about his housekeeper Ms. Hopperstaad – including her first name – despite being her employer the last 28 years. As a lark, the author invites his servant to actually have a conversation with him over drinks. The unexpected evening leads to many surprises, heartfelt revelations, and of course the big laughs that have made Foster an international success.

Starring opposite Foster is Patricia Vanstone, one of the most highly-regarded women in Canadian theatre, as both a performer and developer of new plays. Vanstone will be easily recognizable to fans of A Road to Avonlea who will remember her as Ada Hubble.

Foster and Vanstone have a long history that dates back to 1984 when Vanstone appeared in the World Premiere production of The Melville Boys, still Foster’s best known play. The two friends have worked together several times since then, including Jenny’s House of Joy, which made its World Premiere in 2006. Vanstone says she had asked Foster to write the “Trish show” several times, and he delivered with the role of Ms. Hopperstaad. 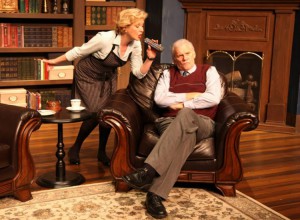 Foster and Vanstone have starred in every production of On a First Name Basis, including successful runs in Bermuda, Jacksonville, and Orangeville. Past productions have been praised for the dynamic chemistry between Foster and Vanstone, hilarious Seinfeld-esque banter, and thoughtful examination of class divisions. Foster has said he is proud of how smart the humour is in his forty-ninth play, instead of just going for the cheap laugh, which he admits he is not above doing.

Vanstone says audiences can expect a lot of laughs, and two engaging characters that possess Foster’s trademark relate-ability.  “Audiences are going to have a great time,” she said.  “So far the feedback we’ve been getting is that the characters are captivating, and many people have said they wish there was a third act so they could see what happens next. That’s a pretty terrific sign that they like what we’re doing.”