Mention Peru and one inevitably congers up images of the stunning Inca site Machu Picchu, but few of us are familiar with the rich Peruvian cultures that both pre-date and follow it. Through paintings, sculptures, exquisite gold and silver ornaments, pottery, photography and textiles this exhibit encompasses pre-Columbian, colonial and modern era Peru. “Our exhibition shows how archeology, in the absence of written records, enables us to travel back in time to establish the existence of founding myths that are unique to this Andean civilization,” explains Nathalie Bondil, Director and Curator of the Montreal Museum of Fine Arts.

The exhibit begins with photos from Hiram Bingham’s 1911 archeological jackpot discovery of Machu Picchu. The mountaintop site, voted one of the New 7 Wonders of the World, is shown in time lapse video along the side wall. Over a hundred years after Bingham’s ground breaking expedition, the site still captivates the imagination.

The next room displays multiple painted ceramics and glimmering artefacts of silver and gold from the Mochica Empire (100-800 AD). A figure holding a ceremonial knife in one hand and a severed head in the other is a reoccurring motif representing a ritual sacrifice ceremony. I find two artefacts particularly noteworthy. The first is a large earspool, made of turquoise and gold, depicting a warrior in full regalia. The second is a small ceremonial bowl, encircled with delicate engraving, from the Chimú civilization (900-1476 AD). If you look closely you can see that half the bowl is made of silver and half is made of gold. Remarkably, the transition between the two metals is completely seamless – a powerful example of the outstanding quality of craftsmanship.

The exhibit continues with a look at pre-Columbian ancestor worship. When a Chimú king died his royal position was inherited by his descendants, but not his palace or wealth. The palace of the deceased became his tomb, a place where his family would often go to seek his counsel or celebrate festivals in his presence – quite literally in his presence, as the mummified body would even be carried around on a litter for important ceremonies. The new king needed to build his own palace and acquire his own wealth. The deceased elite were dressed and adorned in their finest, which often included a funerary mask. The two funerary masks on display, both from the Lambayeque civilization (750 – 1375 AD) share many of the same features: a wide, flat almost rectangular face cut straight along the forehead and rounded at the jaw line, large wing-shaped eyes, nose ornaments, a small mouth, and large rectangular ears adorned with earspools. However, it is a feature unique to one mask that draws my attention – strings of emerald beads hanging from the eyes. On the otherwise stoic face, the beads looked like tears and remind me of the people who created these works as a means of understanding life and death in the world they inhabited.

By means of conquest and assimilation, the Inca ultimately took command of an empire spanning much of western South America. Aiding in the empire’s expansion and facilitating communication, the Inca constructed thousands of miles of road. Nevertheless, the empire was not to last. The Inca had ruled for less than 100 years when they were decimated by the Spanish in 1532. Under colonial rule the European style of painting was adopted and missionaries set about spreading Catholicism. Walk quickly past an oil painting of the Last Supper and you may easily dismiss it as just another replica of this often chosen theme. Take a moment to study the food on the table and you will see the local influence has been injected – potatoes, agave and roasted guinea pig.

A 1944 oil painting by Lenor Vinatea is another extraordinary piece. Pastoras is a dignified depiction of three shepherdesses in a serene Peruvian landscape, complete with llamas. 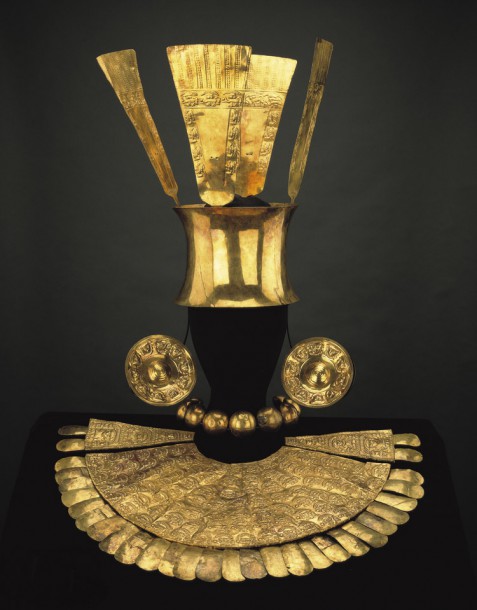 In a small darkened area, a short film provides a poignant finale to the exhibit. Illustrating the sad effects of illegal artefact trafficking, the film follows modern day grave robbers at work. Digging through deep layers of fine sand, they non-chalantly bring up pottery while their leader declares that they are essentially pillaging the history of their nation. After they have rummaged through the site and removed everything that can be sold, there is nothing left for archeologists. Any information that could have been gleaned from the site is forever lost. As dramatic as that fact is – it is the sight of these men callously tearing through a funeral bundle (where the deceased were placed in a fetal position and then wrapped in cloth) that draws gasps from those gathered here. Textiles placed with the body will be sold, while the human remains suffer the further indignity of being pushed aside.

Don’t miss this chance to experience the treasures of Peru and marvel in your new found knowledge of this exceptional corner of the world.

For information on exhibit times and ticket prices, please visit www.mbam.qc.ca
To get the most out of your visit join one of the free volunteer guided tours or use the $5.00 audio guide (available on a museum audio player or your smart device).